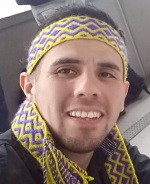 Regional representative for the Andes and Southern Cone

Based in Mapuche land. Lucas Quintupuray lives in Correntoso Lake, territorial space where the Quintupuray community has been established for over 150 years according to documented records. Among his ancestors, Domingo Quintupuray stands out, known in the late 1800s for his virtues as “lenguaraz”, a person who had knowledge of the castellan language. This ability gave him a transcendental role as mediator and translator for his people – who speak Mapudungun – and the officials of the Chilean state north of the Bío-Bío River.

Lucas Quintupuray is currently Longko (leader) in his community and is also a representative of the Zonal Lafkence Council of the Mapuche Confederation of Neuquén, Member of the ICCA Consortium. This Council is composed of three communities, the one of Lucas (Quintupuray), together with Kintrikeo and Paichil. His role as Longko has led him, like his ancestors, to denounce the abuses of state institutions and act in defence of the territory, and to revive the Mapudungun language and culture. He is also one of those responsible for the Meli Folil Kupan which is an ancestral record of the births of children in the communities of the area.

Lucas works with Jorge Nahuel, former member of the ICCA Consortium Council with responsibility for the Southern Cone and current Member of the Council of Elders. He has participated in all the Regional Assemblies of the ICCA Consortium in Latin America and as a representative of the Consortium in international meetings such as the Congress of Protected Areas of Latin America of the IUCN. Lucas is also a member of the indigenous provincial Council, he was appointed and recognised by the communities to speak before the Argentine National Parks organisation of the province.