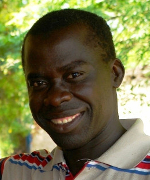 Based in Casamance, Senegal. Salatou is a fisherman from Casamance. He was the founding President and is now a Technical Advisor for the Fishermen’s Association of the Rural Municipality of Mangagoulack (APCRM), one of the earliest Members of the Consortium. The Association and its larger community were the origin of the formal establishment of the ICCA named Kawawana—a coastal and marine area of 9,665 hectares fully governed, managed, and conserved by local initiative. Kawawana is the first ICCA to be officially recognized in Senegal by regional authorities on the basis of the decentralization law — a feat that would have been impossible without Salatou’s vision, enthusiasm, determination, and diplomatic abilities. Salatou’s experience and capabilities are well recognized in the region, and he has organized and attended numerous field exchanges and training initiatives in West Africa. He is currently engaged in promoting the expansion of ICCAs in Casamance and the region at large “while maintaining their quality and integrity”, in particular through the promotion of appropriate forms of recognition and support. Salatou is the ICCA Consortium’s Coordinator for the coastal and marine environments of West Africa.