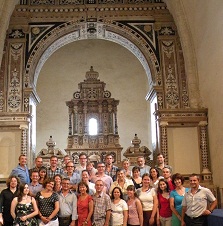 Highlighting European communities’ role in conservation, livelihoods and culture.
About 50 participants from all over Europe convened in the beautiful Italian town of Gerace in Calabria, close to the Southern tip of Europe, to share, illustrate and discuss experiences on community conservation in the continent, many of which can be resumed as “ICCAs”—an acronym standing for “indigenous peoples’ and community conserved areas and territories”.

The workshop was organized from 11 to 16 September 2011 by the ICCA Consortium, the IUCN Commission for Environmental, Economic and Social Policy (CEESP), the World Commission for Protected Areas (WCPA) and IUCN Regional Office for Europe in co-operation with the Fondazione Mediterranea Falchi, the IUCN Environmental Law Centre and the World Conservation Monitoring Centre of the United National Environment Programme. The National Park of Aspromonte generously hosted the workshop and organized a variety of local visits and shows. The workshop was live-streamed and the presentation and discussion sessions can be viewed at: http://www.livestream.com/cinquefrondi_channel

Local communities and indigenous peoples are increasingly recognized in the international arena as important custodians of nature. While some experts focus on their role in maintaining biological diversity and ecosystem functions, others stress that cultural and environmental patrimonies are closely related, and that successful societies can only be built upon communities engaged to support the material and ecological bases of their own sustenance, development and health.

Gerace, discussions in the patio

A wealth of inspiring ideas was discussed during the workshop and its participants drew a variety of lessons for policy and practice that will find occasions to be “realised” in Europe. Some of them stressed the urgency of such work, as Europe is losing today much of the traditional knowledge and practices that have constituted the sap of its communities for centuries. As highlighted by Antonino Morabito, Director of Fondazione Mediterranea Falchi, however: “New communities are emerging, drawing from a varieties of new values and occasions to discover and act together for the “common good“, including welcoming migrants, as the communities of Calabria have been doing for some time”. The WCPA Vice-chair for Pan-Europe, Dr. Stig Johansson noted that: “ICCAs are important for reaching Aichi target no. 11. They specifically highlight the role of communities in governing and managing protected areas.” The European Vice-chair of CEESP, Dr. Grazia Borrini-Feyerabend, mentioned that “as in any other context, ICCAs in Europe depend on the existence of vibrant communities capable of maintaining their own sense of identity, values and self-governance institutions”.

The representative of UNEP-WCMC took the occasion to include some of the presented cases in the ICCA Registry  under development and participants volunteered to be included in the study of legal frameworks for ICCAs under way in several countries under the leadership of the ICCA Consortium and Natural Justice. The Gerace meeting will be complemented by a number of other events in 2012 and 2013. An explicit “act II” will be a workshop discussing ICCAs with more of a focus on northern European countries, possibly to take place in Finland in the summer of 2012. The most telling examples and lessons from the European workshops will be compiled for the IUCN Global Protected Areas Programme and the forthcoming 6th World Parks Congress in 2014 in Australia.

2 minute video on the workshop