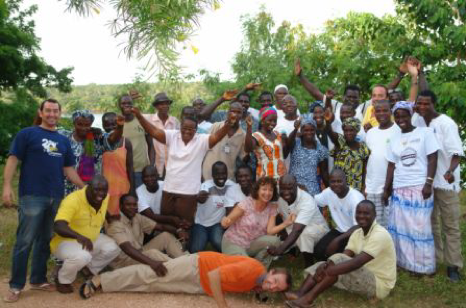 During the mission in Guinea Bissau, the Consortium team had numerous occasions to describe the usefulness of the ICCA approach, including within state-declared protected areas.

Grazia and Christian took advantage of independent travel to West Africa to carry out a mission to Senegal to contract the Consortium coordinator for marine and coastal ecosystems in West Africa— Salatou Sambou— and plan work with him for the months ahead. Salatou is the Executive Director of the Association des Pêcheurs de la Communauté Rurale de Mangangoulack (APCRM) in Casamance— a Member of the Consortium. He is also one of the most active and experienced ICCA advocates and “doers” in the region.

Grazia was contracted by IUCN for a training mission to Guinea Bissau on the topic of shared governance of protected areas where ICCAs can be prominently featured. In that context, she asked to subcontract both Christian and Salatou, as their experience could be of great use during the mission. The first week of the mission included an intensive training for multi-stakeholder teams representing all marine protected areas of the country. During the second week a “shared governance process start-up” was run for a specific protected area— the Natural Park of the Mangroves of Rio Cacheu—one of the largest expanses of mangroves in West Africa, and a repository of great wealth in terms of shrimps, fisheries and marine biodiversity in general.

During the mission in Guinea Bissau, the Consortium team had numerous occasions to describe the usefulness of the ICCA approach, including within state-declared protected areas, and Salatou discussed in detail the concrete experience of his own community ICCA, called Kawawana, facing audiences as varied as the Governor of the Cacheu province and local fishermen from the Bijagos archipelago and Cacheu. Salatou’s interventions were deemed so useful that numerous exchanges visits and mutual learning occasions have been planned and have already found financial support.

Exchange visits between fishermen and other community members from Kawawana and fishermen from several communities in Orango and Bolol (Guinea Bissau) will take place in the early months of 2012 and are expected to provide assistance to the emergence of a few ICCAs fully conceived and run by fishermen communities. Interesting, these will be ICCAs within state-declared protected areas, where a genuine situation of community governance (i.e., communities devising and enforcing their own management rules) has been already discussed and preliminarily agreed with the protected area system managers in the country.

Back in Senegal, Grazia and Christian spent a couple of days visiting Salatou’s Kawawana community with the following objectives (i) providing support to the Kaninguloor team in charge of socio-economic monitoring and reviewing ICCA monitoring results up to date, (ii) testing the “ICCA Safety and Resilience Tool”, ( iii) advising on local ICCA expansion/ replication and promoting the development of a regional association to ensure ICCA quality, (iv) providing advice and support to the APCRM, in particular regarding further local initiatives that could be supported by GEF SGP, (v) collecting material towards a photo story on Kawawana, (vi) planning for the participation of Salatou in the Congress of the International Society of Ethnobiology (Montpellier-France, May 2012). All the objectives could be effectively addressed.

The testing of the Security and Resilience Tool revealed that the self-analysis supported by the Tool can be completed by a group of ICCA-knowledgeable people in one workshop session of about 4 hours. The Tool is not extremely simple to use, and experienced facilitators are needed. But it can be improved with some simple modifications— and its testing for Kawawana allowed ascertaining that its conditions, both internal and external, are remarkable and support a considerable optimism for its long-term sustainability. The final Resilience and Security “Index” for Kawawana was calculated as 0.84 (maximum theoretical value of 1).

The founding meeting of an Association to ensure “ICCA quality” in Casamance was held in Ziguinchor on December 6th 2011, and the association is expected to be formalized in early 2012 with the aim of building upon the successful experience of Kawawana while insuring that further similar initiatives in Casamance will respect some basic criteria of genuine community governance and effective and equitable management.