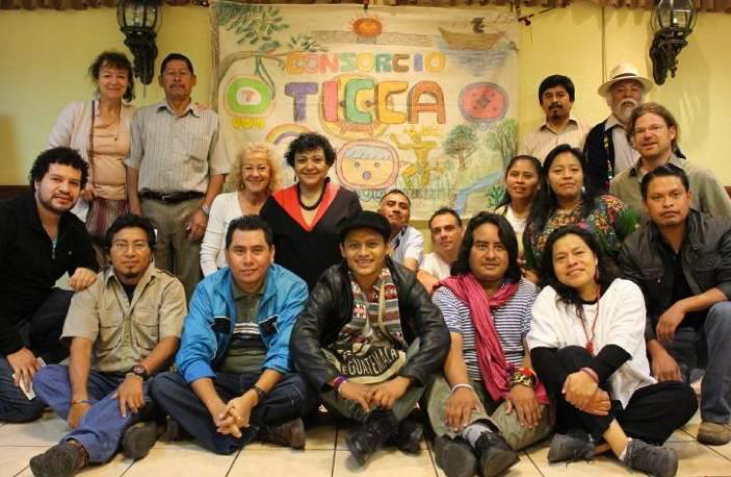 energy. It connects our generations and provides us with history, a present and future. Our territory gives us identity and culture, autonomy and freedom. With our territory goes our life, and with our life goes our dignity. Our territory is our self-determination as peoples.” These words of Cacique Chorotega of Nicaragua were among the many inspiring exchanges recalled and pronounced in Totonicapán (Guatemala) from March 17th to March 27th 2013. It happened as part of an exciting meeting that gathered ICCA Members and colleagues from various countries in Mesoamerica and beyond.

The meeting was called by the ICCA Consortium, co-organized by Oxlajuj Ajpop, the association Ut’z Che, the Global Diversity Foundation and the Sacred Natural Sites Initiatives (SNSI), and attended by representatives of Natural Justice. A range of presentations on indigenous conserved territories and community conserved areas from the region showed a wealth of examples of customary conservation (including preservation, sustainable use and restoration) and governance of ecosystems. Two of the presented experiences were from Mexico: the ejidos governed by the Xpujil communities in Calakmul, and the Santiago Tlatepusco forest in Oaxaca, currently under a “payment for ecosystem services” scheme (PES). Several others were from Guatemala, including the Bio Itza Community Reserve in Petèn, the forest under collective property by the Pocoman people of Palín, and various sacred natural sites. And the remaining experiences were from Costa Rica (marine community reserve of Tárcoles), Panama (indigenous conserved territories of the Kuna people), Nicaragua (the Mayagna ethnic territories) and El Salvador (the community forests of Cinquera). One of the most interesting ICCA cases in the region, and the one explored in most depth during the event, was the wonderfully conserved forest of the indigenous Maya Kit’ché communities of the 48 Cantons of Totonicapán— who hosted the meeting.

The meeting revealed that, throughout Mesoamerica, the capacities and desire of indigenous peoples and local communities to control their ancestral territories are certainly there… but such territories sustain nothing less than a massive assault from extractive industries, timber concessions and bio-fuel plantations, large scale infrastructures, and even misguided “conservation” initiatives. The trampling of customary collective rights is a widespread phenomenon despite the existence of important legal judgments in their favor (e.g., the decision of the Inter-american Court of Human Rights in the Mayagna Awas Tigni vs. Nicaragua case).

As powerfully recalled by Prof. Silvel Elias of the University of San Carlos of Guatemala, Mesoamerica is a casebook example of oppression by dominant groups over indigenous peoples. Through centuries, policies and legislation reproduced themselves with the key aim of extracting resources, repressing dissent and criminalising all forms of resistance. In such a context, the “territory” (land, soil, water, pasture, fuelwood, medicinal plants, etc.) remained the main source of livelihoods for people, often reduced to conditions of poverty or extreme poverty. Through time, however, such “territory as a livelihood refuge” has become more and more precarious and insufficient. On the one hand, the population has become larger and more demanding. On the other, the governments of the region, rather than supporting people in their search for livelihoods, have created new limiting factors. Even the “territory as cultural refuge”, a space where peoples can practice their traditional knowledge and skills and enjoy their cosmovision, spirituality and collective identity, is in retreat. Globalization and state policies are attacking indigenous values through a variety of means, all revolving around the reduction of nature to a commodity.

It is a well known fact that deforestation is relatively less important in indigenous territories with respect to the rest of the landscape. And this is so because indigenous peoples do conserve nature in a spiritual and cultural sense, but also because they know, they value and they protect forests, water sources and biodiversity. The Sacred Natural Sites often found at the heart of indigenous territories infuse them with a sense of reverence and gratitude. But the governments of the region are hardly impressed. In some places they impose “protected areas” but in most others they sell concessions for the exploitation of natural resources. Rarely the Free, Prior and Informed consent of the customary rights holders is respected or their conservation capacities and efforts are recognised. This attitude matches very well the model of extractive industries and mega-projects. The indigenous peoples are left to live in disadvantaged situations, suffering from discrimination, racism, violations of their collective rights and repression of all forms of dissent.

And yet, despite all this, indigenous territories and local customary institutions for their control continue to exist throughout the region and keep reproducing their norms and sanctions on the basis of ancestral systems of authority and responsibility. And they keep conserving whatever nature is left, and providing livelihoods to peoples… With what official recognition? The ILO Convention 169 and the UN Declaration on the Rights of Indigenous Peoples (UNDRIP) have been subscribed in Mesoamerica, and Panama and Nicaragua even possess legislation that offers some form of autonomy to their indigenous peoples. But all other countries are reluctant to recognise any right to self-determination. In Guatemala, despite the existence of excellent principles enshrined in the country’s Constitution, it is still nearly a taboo to speak in terms of “indigenous territories” and the dominant conservation model is the one of “protected areas without people”. Slowly but surely, however, Mesoamerica will need to come to terms to the advances of UNDRIP, and especially so now, when the Convention on Biological Diversity has added its weight towards the recognition of the clear local, national and global benefits of ICCAs. In the context of discussing the international policies and mechanisms that can support ICCAs, a number of meeting participants had critical observations regarding the Payment for Ecosystem Services (PES) schemes, such as REDD and others. Many such schemes, they mentioned, are introduced as “economically beneficial”, but end up limiting or subtracting the use of many natural resources from rural communities. For instance, people may have to buy canned food in place of wild products and the transmission of wildlife-related knowledge and skills from parents to children can be interrupted if the children have no occasion to use them… The only ones who end up really benefitting from PES schemes may be the governments and NGOs who run them. More interesting for indigenous peoples and local communities would be to acquire, first, their collective rights to their ICCAs, and to agree, second, only on those PES schemes whose terms of reference they can themselves inform, negotiate and appropriately test through time.

The participants in the ICCA regional meeting were very conscious of having inherited knowledge and values that are crucial for conservation, and especially so because they were meeting in Totonicapán, whose forests were wonderfully preserved by centuries of fights and resistance by the local indigenous peoples. The traditional authorities of the 48 Cantons of Totonicapán generously welcomed the meeting and accompanied its participants though an in-depth understanding of their institution, their practices, their territory and their resources. They even kindly expressed appreciation for the efforts of the ICCA Consortium, as important lessons were learned in the exchanges that took place during the meeting. Although the term ICCA (TICCA in Spanish) is new and people will likely continue to use their local names throughout Mesoamerica, the participants agreed that examples such as Palin and Totonicapán in Guatemala and the indigenous conserved territories of the Kuna peoples of Panama point at the “characteristic elements” of a model that could be valid throughout the region:

 natural resources are under sustainable use;

 customary leadership is present; and

 there is a strong sense of collective identity.

The creation of a Mesoamerican network of territories and areas conserved by indigenous peoples and local communities (ICCAs)— with such characteristics fully present or at least in the process of being restored– was proposed to keep exchanges alive, strengthen capacities and act from the regional level towards better legal recognition and action in all the countries of the region. For that, it was noted that customary institutions can now fortunately count with indigenous lawyers, who can articulate their demands in compelling ways vis-à-vis the modern institutions of the state. It was also recognised, however, that