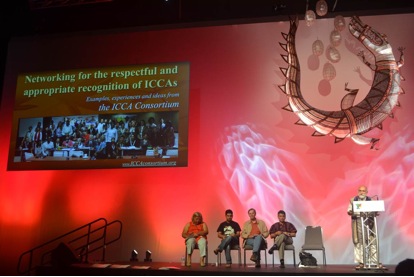 The journey of the World Indigenous Network (WIN) began on a warm day in August 2011, when two men, sitting on the shores of the beautiful Sunday Island, part of the Buccaneer Archipelago in the West Kimberley of Western Australia, talked about the idea of an international knowledge sharing network for Indigenous land and sea managers.

They formed a partnership that day, with a desire to share their vision with the world.

These two men were Tony Burke, the Australian Government Environment Minister and Wayne Bergmann, the CEO of KRED Enterprises. The Kimberley Land Council in Western Australia established KRED to seek out and develop business and job opportunities for the Kimberley Aboriginal people. 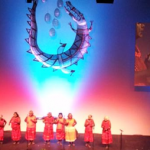 Since that day in August 2011, the journey has gathered momentum and in June 2012, the Prime Minister of Australia, Julia Gillard with the support of Brazil, New Zealand and Norway, launched the Network at the United Nations Conference on Sustainable Development (Rio +20) in Brazil.

The Australian Government established a National Advisory Group to support and provide strategic advice and direction for the WIN and WIN Conference in 2013. The group’s membership comprises of representatives from key Indigenous organisations around Australia.

The Australian Government and the National Advisory Group continue to build relationships and encourage support from other countries, international and non-government organisations to be part of the WIN journey.

As custodians of knowledge and expertise, the World Indigenous Network will bring together Indigenous Peoples and Local Communities land and sea managers to share stories, knowledge, cultural experiences and ideas to better manage ecosystems, protect the environment and support sustainable livelihoods.

The overall aim of the World Indigenous Network is to encourage:

Darwin, Northern Territory, Australia – Today was marked as an important day for the emerging global movement of Indigenous Peoples’ and Local Community Conserved Territories and Areas (ICCAs) [1], which are powerful examples of collective decision-making and stewardship for nature and culture. ICCAs constitute the oldest form of “conservation” on earth. Delegates of ICCA Consortium [2] participating at the pioneer World Indigenous Network (WIN) Conference organized a half a day ICCA-related events where relevant information and experiences on this global movement was shared. ICCAs are found all over the planet, span all types of ecosystems and have been estimated to encompass more areas and territories than officially designated protected areas, nearly 13% of earth’s land surface (Technical Series 64, UN Convention on Biological Diversity).

In the morning, Dr. M. Taghi Farvar, President of the ICCA Consortium, during his keynote address presented the main features of ICCAs, highlighted their contributions in conservation and among others specific threats faced by these areas. He stated that

“ICCAs are integral to empowerment of indigenous peoples and local communities  as they not only play a key role in conservation and securing their rights to land and natural resources but are also the foundation of their cultural identity and pride. They command respect for local results & capacities in the face of so much environmental mismanagement and disasters elsewhere…. Among the threats to ICCAs, nationalisation, privatisation and forced evictions and imposition of destructive practices resulting from combined private interests and government decisions represent an important threat to these jewels of bio-cultural diversity of the world”.

The workshop that followed on ‘Networking for the Respectful and Appropriate Recognition of ICCAs’ highlighted important lessons learned in years of networking, exchanges and advocacy in support of ICCAs in countries as different as Australia, Iran, Nepal, and the Philippines.

Giovanni Reyes, representative of the Consortium’s Member KASAPI (National Coalition of Indigenous Peoples in the Philippines) presented how KASAPI plays a vital role in facilitating multi-sectoral and collaborative engagements among the Philippines’ indigenous peoples, premier academic institutions, government authorities, relevant civil society organizations and international development agencies. He said, “The defense of ICCAs is a daunting task for indigenous peoples alone. No longer are struggles just between IP communities versus powerful economic and natural forces. We seek the support of like-minded groups and organizations nationally and globally because the threats to our ICCAs are national and global.” He added that “conservation of terrestrial and aquatic resources is intrinsically linked to indigenous traditional knowledge… and indigenous peoples have been implementing the UN-CBD objectives. If governments want to effectively pursue the new CBD targets and plans (2020), they had better work with and through ICCAs….”

Reyes noted that his country’s experience was observed with keen interest by Taiwanese indigenous peoples following a four-day Philippine-Taiwan ICCA exchange held in Taiwan recently brokered by the ICCA Consortium. It is expected that work towards strengthening of ICCAs will be initiated among ethnic groups within Taiwan and between Taiwan and the Philippines. He further said expansion of ICCAs is foreseeable in the near future as the two country’s concerted efforts on networking for ICCAs will trigger the creation of an “East-Asia ICCA Corridor” that will bridge the two countries’ local ICCAs and regional ICCA networks.

Dermot Smyth, one of the pioneering contributors in works towards Indigenous Protected Areas (IPAs) in Australia, showcased the successful experience of Dhimurru IPA, a “country-based” integrated land and sea territory of Aboriginal peoples in the Northern Territory. Experiences of national networking for the support of ICCAs from Nepal and Iran were also shared.

Following the ICCA workshop, the first comprehensive ICCA Toolkit was launched by UNEP-WCMC and UNDP. Ms Colleen Corrigan, from UNEP-WCMC noted the value of the Toolkit for indigenous peoples and local communities for recognition and support to ICCAs. Colleen further stated that “it has been designed and written specifically for locally governed and managed protected areas and other conservation initiatives. Sixteen case studies from around the world highlight innovative tools and approaches that local communities and indigenous peoples have developed to address critical challenges that affect their natural and cultural resources. It includes a diverse set of resources organized around five key themes (documentation, management planning, monitoring and evaluation, communication, and finance and values) to assist civil-society led initiatives around the world to voluntarily conserve ICCAs.

At the end of the day, the importance of ICCAs as well as networking for recognition and support of ICCAs were discussed. Enhanced collaboration and partnership between ICCA Consortium and future processes of World Indigenous Network were acknowledged.

The ICCA Consortium, a global association of indigenous peoples’ and local communities’ organizations and supporting NGOs, was born to uphold ICCAs and make sure that their processes of recognition are respectful and appropriate. It has been involved in global networking, advocacy for ICCAs in international policy processes as well supporting regional, country and grassroots initiatives.

[1] ICCAs are defined by the International Union for the Conservation of Nature (IUCN) as “natural and modified ecosystems including significant biodiversity, ecological services and cultural values voluntarily conserved by indigenous peoples and local communities through customary laws or other effective means.” [2] The ICCA Consortium is rooted in the movements that promoted equity in conservation in the 1980s and 1990s. It was formally created in 2008 in Barcelona (Spain) and was legally established in 2010 in Geneva (Switzerland) as a global, member-based organization.