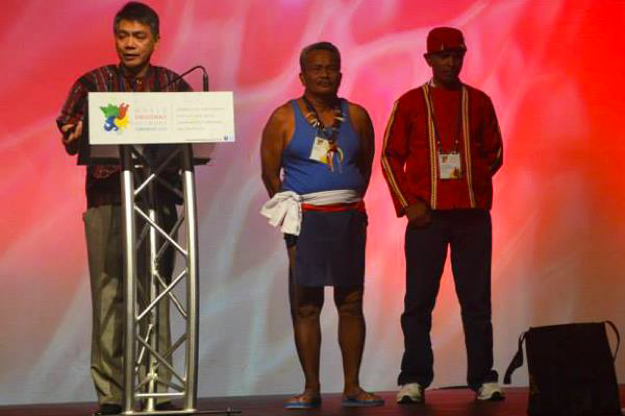 What is significant about our international engagements the last two years since the launching of the first National ICCA conference is the emerging realization by global conservation groups – government and non-government alike – of biodiversity’s inextricable link to the relationship between indigenous knowledge and conservation. We have been approached by global environmental networks engaging the International Union for Conservation of Nature and UN-CBD Conference of Parties, who have expressed interest at how we were able to form partnerships and building the viability of indigenous community conserved areas.

While conservation is a common agenda of the world’s environment domain, indigenous knowledge has been largely put aside because discourses in environmental management often separate nature conservation, wildlife habitat, protected areas and indigenous knowledge. Such dichotomy only shows a marked position of indigenous peoples being in the margins in terms of environmental planning and decision-making. Yet, as so often propounded by customary law practitioners but largely unarticulated in the larger society, the ideas and processes in which these are managed are of the same stock and linked in the same ecosystems addressing the same objectives. These objectives are embodied in the UNCBD and have been practiced by indigenous peoples through time.

Now, the fruits reaped from the partnership between NewCAPP, PAFID & KASAPI include Community ICCA Declarations and ICCA registration at the UNEP-WCMC. Both, we argue, are NOT abstract testaments but living embodiments of Articles 8 (j) and 10 (c) of the UN-CBD. Article 8(j) calls on State parties to “promote the wider application of innovations and practices of indigenous and local communities” while article 10(c) calls on parties to “encourage customary use of biological resources in accordance with traditional cultural practices”. This (line of) argument formed the framework of our international engagements.

KASAPI’s partners in Climate Change and Adaptation Project including seven countries in South-east Asia will visit us in November for an exposure trip (Cross-site visit). The aim is to allow participants to see for themselves about ICCA work and learn first-hand practical steps in participatory mapping and resource inventory. Under the umbrella of the Asian Indigenous Peoples Pact (AIPP), our partners include Thailand, Indonesia, Malaysia, Laos, Vietnam, Nepal and North-east India.

From May 17 – 20, 2013, while a diplomatic row between the Philippines and Taiwan, province of China, raged over the killing of a Taiwanese fishermen over Philippine sea (as claimed by the Philippine government, but claimed as neutral fishing ground by Taiwan), we engaged in a Philippine-Taiwan ICCA exchange (diplomacy at citizen’s level, we called it) with the School of Forestry and Resource Conservation of the National Taiwan University, Lanan Cultural and Eduational Foundation and the Taiwan Forest Certification Development Association. Brokered by The Global ICCA Consortium through its East Asia ICCA representative Mr. Sutej Hugu with collaboration from the Taiwan Forest Certification Development Association and the Council of Indigenous Peoples of Taiwan, the Philippine-Taiwan ICCA exchange was held with the theme: “Discourses on Indigenous Governance and Forest Certification, Taiwan 2013”. KASAPI was tasked to share to our hosts how the Manila Declaration on ICCA came about. Enlightened by our experience, four major ethnic groups in Taiwan will be federated following the Philippine model. The Philippine-Taiwan ICCA exchange also committed to create in the long run, an East-Asia ICCA Corridor involving the Philippines, Taiwan, province of China, Japan (Okinawa), South Korea (Jeju) and Southern China (Yunnan).

From Taiwan, the ICCA models’ popularity gained momentum at the World Indigenous Network (WIN) in Darwin, Australia. Our engagement from May 23-31, 2013 was brokered by PAWB-NewCAPP and the Geneva- based ICCA Consortium. With more than 1,200 international delegates including 600 Australian Aborigines present, the UN Special Rapporteur on Indigenous Peoples Prof. James Anaya described WIN as “the largest gathering of indigenous peoples in history”. The Philippie ICCA delegates include Mr. Salvador “Badong” Dimain of the Maporac ICCA, Zambales Mt. Range, Datu Johnny Guinna of Portulin, Bukidnon ICCA, Kalatungan Mt. Range and this author. One of the aims of WIN was: “to look into Indigenous peoples views on sustainability, their links to nature and culture, conservation and rights to self-determination.” In our view, this simply means territories, traditional governance systems and indigenous knowledge – three pillars that make up an ICCA.

At the WIN, we spoke on two plenary sessions: one, on ICCA as a powerful solution to the environmental crisis; and, two, during the launching of the First Comprehensive ICCA Toolkit by UNEP-WCMC and UNDP-Equator Initiative.

Of the first, we argued that most of the country’s remaining forests are in territories where indigenous peoples have asserted their having been culturally, spiritually and economically linked to their ancestral domains. On the second, we propounded about the ICCA Registry as a community effort and a rights-based process backed by UNDRIP particularly Articles 3 on Self-determination, Art. 32 on Culture with Development, FPIC and Obligations of States and Art. 37 on Treaty Principles as well as the UN-CBD particularly Articles 8 (j) and 10 (c ).

Since the Philippines is a signatory to both the Declaration and the Convention on Biological Diversity, we argued that the processes and stages of our ICCA work from documentation to mapping to resource inventory to community conservation planning and registration at the UNEP-WCMC is proof that synergy of government and genuine IPO-NGOs can effectively contribute to the country’s commitments under the Aichi Biodiversity Targets, particularly targets 11 and 18 on traditional knowledge and customary sustainable use.

What was clear to the Philippine IP team during the WIN conference, as one participant aptly noted, is the shifting of global power in terms of natural resource management in a magnitude unimaginable three decades ago. The gradual shifting of power into the hands of indigenous lands and sea managers signal global recognition of the crucial role indigenous peoples play in conservation. We left Darwin with the thought that the upsurge of indigenous voices through the ICCA track is signaling the reassertion of the logic of traditional governance system as a conservation mechanism at its pristine best.

On June 7-14, 2013, around 700 indigenous leaders gathered in Alta, Norway for the historic Global Indigenous Preparatory Conference for the United Nations High Level Plenary Meeting of the General Assembly to be known as the World Conference on Indigenous Peoples (WCIP). The participants came from seven (7) global regions with each region having 37 official representatives each. Several observers consist of additional indigenous persons, representatives of the UN bodies and special procedures, governments, civil society organizations and funders. The outcome of this conference is the Alta Outcome Document that was unanimously adopted by the participants.

KASAPI formed part of the Asia delegation under the Asia Indigenous Peoples Pact. Representatives of the Philippine-based IP organizations have actively taken part in earlier meetings such as the “Asia Indigenous Peoples’ Regional Preparatory Meeting for the WCIP” held in Bangkok in November 2012 and other WCIP processes including the Asia Preparatory Meeting for the UN Permanent Forum on Indigenous Issues held in Malaysia in March 2013. I’m pleased to state that we sent one holder of ICCA model to participate in the November 2012 meeting in Bangkok. The person is Mr. Salvador “Badong” Dimain of the Maporac ICCA.

At the Alta event, we were privileged to be part of the drafting team for the Alta Outcome Document. Under Par. 3 on Theme 1: Indigenous Peoples lands, territories, resources, oceans and waters, we included the phrase “delineation and demarcation” in lieu of the word “mapping”. This also means that identification of traditional territories, bio-cultural landscapes and sacred places as approved by the conference will be utilizing a systems long established in the Philippines under Department Administrative Order 2 Series of 1991 of the Department of the Environment and Natural Resources (DENR). This means that mechanisms in the Philippines are far advanced with a mechanism that the international community has yet to adopt. We have just made an initial step towards that through the Alta Outcome Document. This document will be the subject of debate and approval during the forthcoming United Nations High Level Plenary Meeting of the General Assembly otherwise known as the World Conference on Indigenous Peoples (WCIP) to be held in New York, September 14-17, 2014. 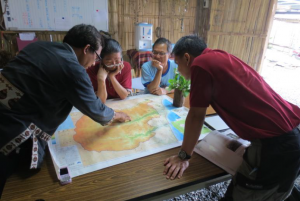 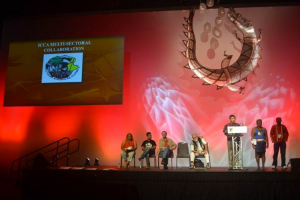 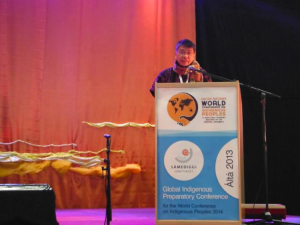