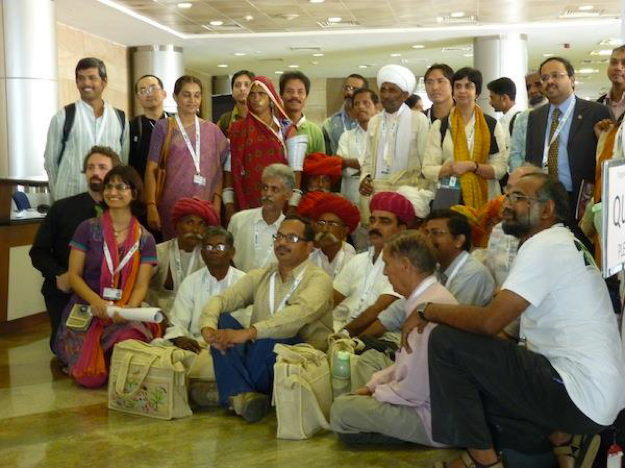 Kalpavriksh, in collaboration with the ICCA Consortium and the Foundation for Ecological Security (FES), organised a half-day workshop at COP11 (Hyderabad, India, October 8-19) on the potential to achieve the Aichi Targets through Community Conserved Areas (CCAs) in South and East Asia. Experiences were shared by participants from Bangladesh, Nepal, Pakistan, India and Taiwan, province of China. A large number of threats and issues facing CCAs emerged during the event. It was broadly understood that these issues and threats are more or less the same for all countries and emanating from same or similar forces and processes. One common voice from all was a need for recognition of CCAs in all countries in the manner appropriate and acceptable by the concerned communities, instead of imposed and inappropriate legal means. Towards this, many expressed a desire to better connect with each other to provide strength to each other’s efforts and struggles. The meeting led to a number of suggestions including: organisations and communities could become Members of the global ICCA Consortium but also have smaller discussion groups within South Asia; they should stay connected with each other through some joint actions; and they should support each others’ struggles through alerts. A publication entitled ‘Community Conserved Areas in South Asia: Case studies and analyses from Bangladesh, India, Nepal, Pakistan and Sri Lanka’ was released during this event, bringing together the efforts of a number of partners from various countries (supported by UNEP-UNDP SGP and published by Kalpavriksh).