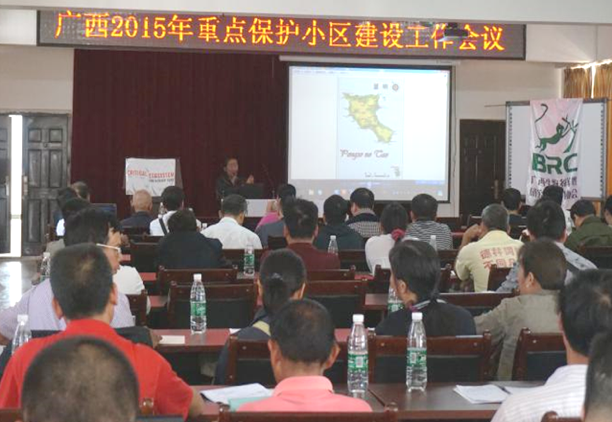 I was invited, from April 13th to 17th, by Yingyi and BRC, to attend the Community Conserved Areas Workshop in Nanning, Guangxi (China). It included a field trip to three Zhuang peoples’ villages, which was my first experience in this region in China. From my indigenous point of view, we need to emphasise and focus more on the advantages and heritage of bio-cultural diversity, local knowledge, rather than on modern scientific and professional support coming from project-based NGOs. The dilemma lies in the multiple threats that are weakening the spontaneity of local peoples. Following this, on April 22nd, Earth Day, we arranged a Skype meeting on Bio-Cultural Community Protocol and invited Holly Jonas and Ashish Kothari as guest speakers to share their knowledge and experience of various cases in many countries. I set the topic as “On adaptively developing Bio-Cultural Community Protocols in China”. We suggest that each SGP-supported ICCA project should strive to get its own Bio-Cultural Community Protocol of local knowledge and traditional institutions as the basis for developing effective communication with the government and outside assistance. Thanks to Holly’s kind help, we also obtained authorization to translate into Chinese the book: “Biodiversity and Culture: exploring community protocols, rights and consent” (PLA65, IIED). The first draft will be handled by Liuyi.

Now, the original ambition to host the Asia Regional Learning Network for GSI is taking shape into a national learning network conference on ICCAs in China which will also welcome the participation of a few key international specialists. Yingyi’s BRC team has taken upon itself the responsibility of developing the proposal, and we received the revised draft in mid-May. Yi Liu is in charge of negotiating with Terence Hay-Edie for budget support. Grazia Borrini-Feyerabend will also participate in this event, which will be held in the fall of 2016.  Its preparation will continue throughout the coming months.