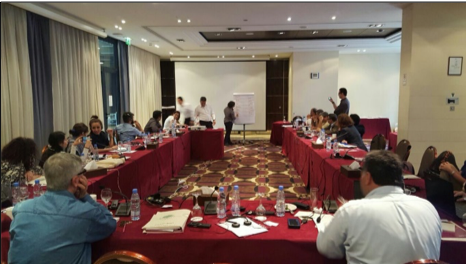 Women and men from 12 countries and 20 organisations and networks including members of regional and sub-regional social platforms of farmers, herders/pastoralists, artisanal fisherfolk, consumers, NGOs, human rights movements, women’s rights advocates, young people, academics  and  indigenous peoples, met in Beirut (Lebanon) on 7–9 April 2016.  Together, they laid the groundwork for the 33rd FAO Regional Conference for the Near East and North Africa (NERC33), which later took place in Rome on May 9 -13, 2016.

Participating representatives from civil society took the occasion of the meeting to set out their plans to cooperate in supporting small producers and indigenous peoples and to discuss the implementation of the FAO Voluntary Guidelines on Tenure.

All present affirmed their solidarity with, and support of,  the marginalised and oppressed farmers, peasants, pastoralists and fisherfolk of Syria, Sudan, Yemen, Libya and Iraq, who have been enduring imposed wars and terrorism amid continued attacks on their sources of livelihood, as well as displacement and death, throughout a harrowing period of over a decade. They emphasized the urgent need for the FAO and relevant UN organisations to establish a reliable database to show the actual situation of land and water resources and livelihoods, as well as the underlying causes of food insecurity in conflict situations. The participants spoke of the value of the FAO regional initiatives and the progress they had helped to make in the past two years.  They especially welcomed the special initiatives on Building Resilience, Water Scarcity, and Sustainable Development of Small-scale Agriculture as vehicles to improve food security and nutrition at both national and regional levels.

The civil society organizations called for measures to ensure the resilience of persons and communities as they struggle to sustain food security, food sovereignty and nutrition. They identified three strategic avenues:

I attended the meeting as representative of the National Federation of Nomadic Pastoralists of Iran (UNINOMAD) and CENESTA, but also as a co-coordinator of the ICCA Consortium in West Asia.  As such, I was well positioned to emphasize the role of indigenous peoples and ICCAs in food sovereignty.  The meeting declaration ended up insisting on the essential role of indigenous peoples in food security and sovereignty.  This was the message carried to the FAO as they planned for the meeting in May.

In the occasion of the meeting in Beirut, I had the opportunity to meet with representatives of two NGOs that are working with indigenous peoples and taking steps toward ICCA recognition in the region.  These NGOs are Al Hannanah, of Jordan and The Society for the Protection of Nature (SPNL) of Lebanon.

SPNL has worked for more than 30 years to conserve the natural environment, empower women, enhance gender equality and fight poverty. SPNL works with partners in the public and private sectors and with civil society organizations.  It conducts empirical research, promotes capacity building, and advocates for evidence-based practical ways to change policies and programs.  I encouraged SPNL to join the ICCA Consortium to strengthen connections with CENESTA and other members and to develop a database of existing and potential ICCAs in the region.