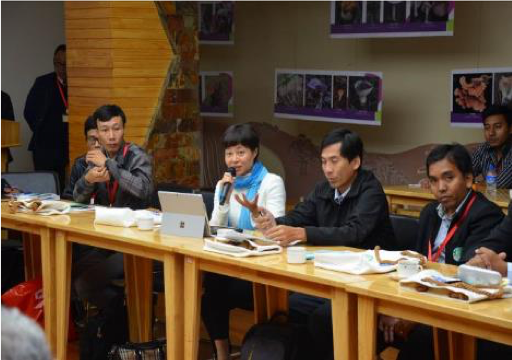 The International Training Workshop on Community-based Biodiversity Conservation was held in Yunnan, China, from 30th Oct. to 13th Nov. 2016.  It was organized by the Kunming Institute of Botany, of the Chinese Academy of Sciences (CAS). More than twenty participants, from Myanmar, Thailand, Viet Nam, Cambodia, Laos, Nepal, India, Bangladesh, Sri Lanka and China, took part in this workshop, with the aim of providing a training course and strengthening networks among young scientists and practitioners working in biodiversity conservation in South and Southwest Asia.

South and Southeast Asian is a global hot spot for biodiversity and cultural conservation. This region is one of the most populated areas in the world and has historically had less economic development, but it is now expected to experience fast changes from a socioeconomic and ecological point of view. Hence, the pressure to safeguard Nature and its valuable resources is increasing. National Park or Nature Reserve lives are hindered by monetary resource shortage and causes growing conflict forbidding local communities to use natural resources for their livelihoods. To simultaneously mitigate this kind of conflict and to achieve the preservation of natural lands, a community-based conservation approach is highly recommended.

Ms. Yi Liu was invited to introduce Global Environment Facility (GEF) Small Grants Programme’s (SGP), an initiative that supports ICCAs in China. Since its establishment in 1992, GEF SGP has supported about 3000 ICCAs around the world, including 21 in China. Local people and communities in China have developed uses of natural resources that are compatible with conservation, some of which were recorded 2000 years ago, in ancient literature. Local communities manage their surrounding ecosystems through indigenous knowledge, traditional culture and customary laws, all of which contribute greatly to biological and cultural conservation, sustainable livelihoods, and greater resilience in the face of natural disasters. Regrettably, the value of ICCAs  is underestimated by mainstream society. ICCAs in China have provided great ecological, social and economic benefits not only for local people but for society as a whole. Some provinces or local governments have issued bylaws or policies to recognize and support ICCAs. For example, in 2012, Guangxi Provincial Forestry Bureau issued “The Regulations on the Forest and Wildlife Small Protected Areas in Guangxi”, and enabled local communities to establish community conserved areas following the principles of self-establishment, self-fundraising, self-management and self-benefit. By the end of 2015, there were 134 ICCAs in Guangxi. GEF SGP supported the project ‘Mainstreaming and Capability Enhancement of Community Conserved Areas in the Southwest of Guangxi’, which aims at working with stakeholders to build ICCAs capacity, support them as they work to obtain governmental and society recognition, and attempt to mainstream ICCAs into the Guangxi protected area system. This project’s outcome could be replicated and extended to other provinces in China.

During the workshop, Prof. Shengji Pei, from Kunming Institute of Botany of the Chinese Academy of Sciences, talked about Sacred Landscape Conservation in Yunnan, China. Prof. Yiching Song, from the Center for Chinese Agricultural Policy (CAS), described two Community Based Biodiversity Conservation cases: the Potato Park in Peru and Stone Village in China. Dr. Chusie Trisonthi, from Chiangmai University, explained the lessons to be drawn from ethnobotanical studies and the implications of plant conservation and utilisation in Northern Thailand. Dr. Xuefei Yang, from Kunming Institute of Botany, CAS, talked about protection of traditional knowledge, cultural expressions and genetics. Prof. Peng Luo, from Chengdu Institute of Biology, CAS, highlighted the development and challenges of Chinese national parks. Prof. Anthony Cunnigham, from University of Western Australia, talked about community conservation cases from China, Indonesia and Africa. Dr. Jianying Xiang, from Southwest Forestry University, focused on biodiversity and conservation of the ferns and lycophytes of Yunnan. Dr. Lixin Yang, from Kunming Institute of Botany, CAS talked about community conservation of medicinal plants in Ludian Township in Yunnan. Mr. Kang Wei, from TNC, described  community engagement in the land trust conservation of TNC China. Prof. Yongcheng Long, from SEE, talked about Yunnan nub-nosed monkey conservation with community approach. Dr. Xuefei Yang, from CAS, spoke about prized matsutake mushroom management at the community level in Northwest Yunnan.

The participants in the workshop © J. Yang