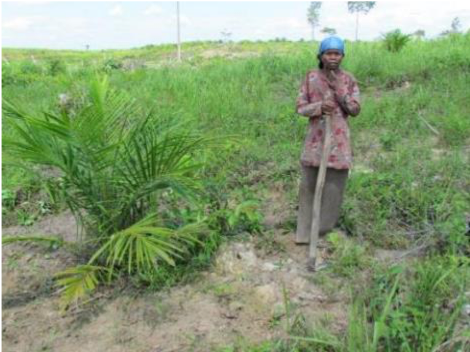 Debates are passionate around oil palm. On one side, pro oil palm groups advocate that it is necessary both for local economic development and for being the most efficient crop producing oil. On the other side, opponents underline its link to deforestation and social injustice, including the expulsion of communities from their lands. With these impacts in mind, Dario Novellino, from the Coalition Against Land Grabbing, explained that oil palm expansion should be stopped, in the last ICCA newsletter (Novellino, 2016)

As early as 1997, Western consumers were shocked by the reports of widespread forest fires in South East Asia that were linked to oil palm expansion. This prompted dominant supply chain actors to engage, promising to address the negative impacts. But, it was only at the last World Park Congress that IUCN adopted a resolution to assess ways to balance oil palm development with conservation. Why are we still assessing the pros and cons of this crop, twenty years after the first reports? Behind this lasting controversy, I was flabbergasted to find four “myths” surrounding oil palm. They all contribute to confusing messages, and impede common sense solutions.

A first myth is that oil palm supports local economic development. To understand this, we need to look at the historical context. After gaining independence from colonial powers, Southeast Asian states, especially Indonesia and Malaysia, took over large areas managed by the local communities and indigenous peoples to establish “forest states”. Governments are now leasing oil palm concessions from forest states to develop an export-oriented economy. To maximize production, each lease is typically about four thousand hectares linked to a mill that extracts the oil. This has led to the emergence of more than 50 giant palm oil producers, each exploiting at least 100.000 hectares, collectively about eight million hectares of oil palm (ZSL, 2016). In addition to these large-scale producers, there are smallholders who are producers that only manage a few hectares, typically two. They can be divided into two categories. The “dependent smallholders” are farmers, often coming from other areas, who are linked to a large producer with an exclusive contract to buy the production and to provide technical assistance. The “independent smallholders” are local peoples who own their land and plant without any support. As a result of this system, their yield is only half that of the other categories. Most of the economic benefit comes from controlling the supply chain (including a first mill to produce red oil and a second mill to purify the oil), but locals are excluded from this control. Their work remains unskilled and restricted to collecting bunches of fruit to take to the mill and to maintaining the plantations.  This results in low wages for the local people.

Myth 2: The demand for palm oil will grow: we need more plantations

A second myth is that the demand for palm oil will steadily rise (RSPO, 2016).  This myth results from a confusion between past trends and current forecasts. Indeed, palm oil production is now three times higher than in 1999. This growth is linked to recent demands from agro-business and agro-fuels. Palm oil counts now for 40% (or 70.000 tons, including palm oil from the pulp and palm oil kernel from the seed) of the global vegetable oil market (USDA, 2016).

Given this recent growth, there is no need for new plantations. Three reasons make this conclusion clear.  First, agro-industry demand is decreasing, especially in Western countries. Since mandatory labelling began in 2014, with its warning for saturated fats, consumers no longer want this oil. Overall demand in Europe is only increasing because of biofuel which now accounts for 45% of total consumption (TE, 2016). Second, many already established plantations are only now beginning to produce, as there is five-year gap between planting and production.

Third, targeted support to smallholders (for seedlings, in particular) to raise their outputs will have the benefit of reducing the demand for oil palm expansion in the coming decades. For these three reasons, fewer planted areas are actually needed, unless the biofuel market expands. With the current trend of expansion, there will be overproduction and price collapses that will negate the benefits to downstream agro-businesses.

A third myth is that global “sustainable” palm oil is the answer. This widespread belief is promoted by dominant actors in the supply chain. Indeed, after lengthy discussions, major environmental NGOs (such as WWF), main producers (especially from Malaysia and Indonesia) and downstream users (for example, Unilever) established the Roundtable on Sustainable Palm Oil (RSPO). Since 2008, the RSPO certifies “sustainable” palm oil. At the end of 2016, the RSPO was certifying about 20% of the world production as “sustainable” (RSPO, 2016). Facing the risk that consumers might shift away from palm oil, RSPO and its members have been widely promoting this certified oil, including by establishing liaison offices and animating a “palm oil debate” in The Guardian newspaper. However, this certification raises two fundamental concerns. First, only some of the largest producers get certified. The overwhelming majority of the smallholders are excluded from certification because it is too costly and the managerial requirements are too demanding (Ruysschaert &Salles 2014; Ruysschaert 2016). Second, certified producers often do not respect the international accepted rights of indigenous peoples to their customary lands and Free, Prior and Informed Consent (FPIC) (Colchester 2016). To settle conflict with communities, the RSPO promotes economic interests above any other values. In conclusion, RSPO certification has promoted the agro-industrial model of mass production while overlooking the fundamental issue of local communities being dispossessed from their lands. A last myth is that conservation and social NGOs are widely supporting “sustainable” palm oil. This is far from the reality, as demonstrated in a recent article (Ruysschaert & Salles, 2016). Only 32 environmental NGOs and 13 social NGOs are RSPO members: NGOs only count for about 3% of the membership (RSPO, 2016). Those NGOs who are also members of the RSPO adopt a “collaborative” strategy, providing scientific evidence, setting up rules and holding positions on the RSPO board, which makes them very visible (see picture). But, by adopting this scientific-managerial approach, those NGOs have engaged in a process of an on-going negotiation of means and goals, and this has effectively silenced their initial concerns. In addition, this process has excluded all other NGOs from the RSPO, such as the “sceptic NGOs” that work with communities to address the root causes of the issues (i.e. secure local land rights, control production). As a result, sceptic NGOs progressively disengage even more from the RSPO. In conclusion, the RSPO has constrained social and environmental NGOs that would be more effective in reaching their goals either by focussing on their initial conservation objectives or by strategically collaborating with each other outside the structures of the RSPO (Ruysschaert & Salles, 2016).

Denis Ruysschaert has widely published on palm oil in International peer-reviewed journals such as Conservation and Society, Ecological Economics, and IUCN Policy Matters.