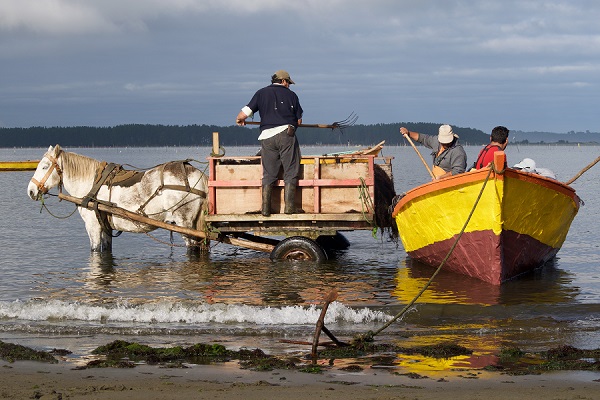 Marine and Coastal Areas that have been used harmoniously by Indigenous people in Chile for centuries are under threat. The Chilean government’s policies are aligned to support the interests of big corporations and to create obstacles for Indigenous communities’ rights.

Chile’s National Law on Fisheries and Aquaculture passed in the early nineties. Subsequent modifications to the law have failed to recognize access rights for Indigenous communities. Given the increasing competition for coastal and marine areas due to industrial growth, these communities have experienced a substantial loss in their access to marine and coastal spaces and resources.

In 2008, Law 20.249 was passed, creating the Marine and Coastal Areas for Indigenous People (MCAIP). This was a truly historic step toward the recognition of indigenous communities’ rights to coastal areas in Chile. The law recognizes and safeguards the right of Indigenous Peoples to exercise customary uses of coastal marine areas and resources, including fishing, medicine, connectivity, recreation, and spiritual practices, among many others. Its  focus is on the development of community-based management models for indigenous communities, with the goal of  improving human coastal livelihoods.

This Law is the only legal resource that indigenous communities have to maintain their customary use of coastal and marine areas. However, in the 10 years after its promulgation, only 5 out of 79 requests for Marine and Coastal Areas for Indigenous People have been fully approved. Geographical isolation and lack of access are among the difficulties that these communities face when dealing with the high levels of bureaucracy surrounding Law 20.249, especially the extremely lengthy periods of evaluation and the multiple steps required by an array of governmental agencies.

In contrast, big corporations, with their legal teams and financial resources, are able to overcome such barriers much more easily. Within the Patagonian ecological region alone, there are more than 1,350 approved licenses for salmon aquaculture. Farmed salmon is now the second most exported product in the country (after copper), and by far the biggest threat to this region’s fragile marine ecosystems. In spite of this situation, the industrial sector claims that Law 20.249 hinders industrial development and economic growth because the process of an MCAIP request has priority over all other activities requiring permission to use natural resources, including concessions for aquaculture, ports, energy and mineral prospecting.

This claim appears to have strong support from the current government. Recently elected right-wing president, billionaire entrepreneur Sebastian Piñera, along with the Federation of Chilean Industry (in Spanish: Sociedad de Fomento Fabril – SOFOFA), has declared his intention to introduce substantial modifications to the Law: “Of course we have to protect our ancestral heritage, but we have to do it in an intelligent way, that doesn’t restrain the development of fishing, salmon and shellfish aquaculture industries”, Piñera stated in a recent interview [1].

But there are dissenting voices within the industrial sector, too. In April 2018, less than a month ago, Fernando Villarroel, Chile’s Managing Director of Marine Harvest, the biggest salmon company in the world, promised to reduce their investments in Chile because they consider themselves incapable of managing all the licenses they currently hold. “Considering the loading capacity in our country, it is impossible to use all the 187 licenses which Marine Harvest has in Chile, nor do we have the intention to do so. Mainly because we believe that industry in Chile needs a sustainable level of production”, said Villarroel in a recent interview[2].

As in other Latin American countries, Chile’s abundance of natural resources is disproportionate to its government’s environmental regulatory capacity. This situation has historically resulted in controversy about the social and environmental impacts of extractive industries, particularly in salmon aquaculture. For the growing expansion of this industry, especially throughout the southern Patagonian fjords, Villarroel suggests: “Chile must reduce license numbers, increase the distance between farming centers, increase capacity and make sure that any growth is determined by biologic and sanitary results of any center and company”. This is a conservative response compared to recently passed legislation in Washington, which prohibited salmon farming on all its coasts after thousands of Atlantic salmon escaped from a fish farm into the Pacific.

Given the strong competition for marine and coastal spaces and resources, Chile must ensure fair conditions for indigenous communities to exercise their legitimate substantive rights. This means to conscientiously and fairly apply not only Law 20.249 regarding MCAIP, but also international conventions, such as the Inter-American Convention on Human Rights, the Convention on Biological Diversity, and ILO Convention 169. The growing dangers for human right defenders who confront corporate power adds urgency to the need to create an inclusive arena for the discussion of these fundamental issues, and to protect and guarantee the human rights of indigenous communities in Chile.

The next four years under recently elected president Piñera will be critical for placing Chile on the path to sustainable development and social inclusion. Patagonia stands as an example of natural and sustainable ways of living and has immense potential for putting Chile at the frontline of ecological development. However, critical steps are essential to foster the much-needed conciliation process with Indigenous People regarding their ancestral land and sea territories, and to resolve the conflict that has been affecting the entire country for centuries.

It should be noted that the last modification of Chile’s National Law on Fisheries and Aquaculture on 2013 (Piñera´s first term) was targeted with serious allegations of corruption during its debate and development by the Chilean Parliament. In fact, the newly elected Chilean President Piñera had made a campaign promise committing to its modification, and to taking this moment as an opportunity to include indigenous people in the debate, in line with the recommendation by  FAO[3]  in a recent study of the legislation made at the request of former president Michelle Bachelet. The full implementation of law 20.249 and ILO Convention 169 demands that any modification of the Law on Fisheries and Aquaculture be compatible with the principles of human rights and access for Indigenous People that these laws and agreements both express and codify.

Find here the related case of the Caylin Island, in South Chiloé.