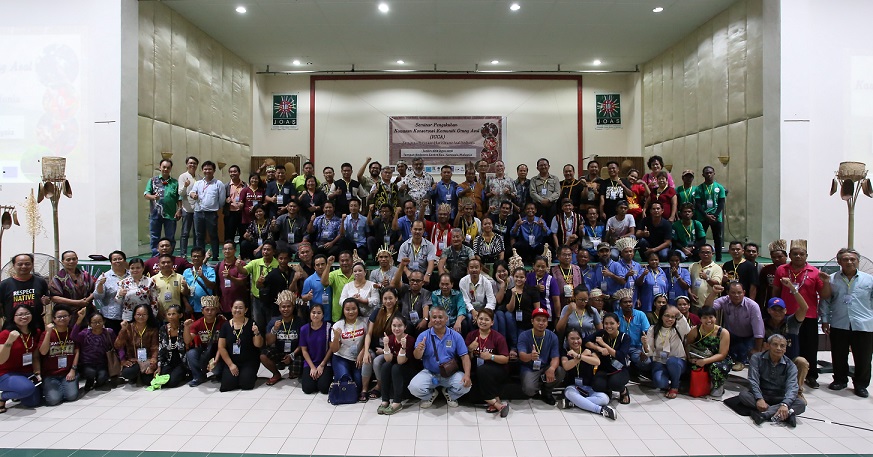 Indigenous peoples’ organisations from across Malaysia gathered for a full-day seminar on ICCAs on 8 August 2018 in Bau, Sarawak. Unique to different Indigenous peoples in the three regions of Malaysia, terms such as Pemakai Menua, Pulau Galau, Gompi Guno and Ingaladan represent sophisticated systems of Indigenous customary laws and practices that enable the respective communities to live in harmony with their traditional territories. These “territories of life” are a grassroots global phenomenon, embedded in thousands of local cultures and known by at least as many local names. Known internationally as “ICCAs—territories of life”, they are increasingly recognised in international and domestic law and policy for their significant contributions to culture, conservation and sustainable development.

The full-day seminar on 8 August was organised by Jaringan Orang Asal SeMalaysia (JOAS) with support from the EU and BirdLife International through the Malaysia Nature Society as well as UNDP GEF-SGP. The objectives were to: (a) share experiences with ICCAs from each region in Malaysia; (b) identify the concepts and terms used for ICCAs in Malaysia; (c) discuss the potential of ICCAs to contribute to national conservation policies, based on the aspirations of Indigenous peoples; and (d) strategic planning to strengthen ICCAs in Malaysia. At least 207 Indigenous participants attended the seminar, including 27 from West Malaysia, 43 from Sabah and 137 from the host state of Sarawak.

A growing body of evidence shows that ICCAs – territories of life – likely cover more area than the world’s state-designated protected areas. ICCAs can also be more effective than state protected areas at preventing deforestation, maintaining forest health, conserving biodiversity and natural resources, and supporting culturally appropriate livelihoods. However, most are not recognised or supported by governments and instead face a number of threats, including to their leadership and governance systems, intergenerational transmission of language and knowledge, and the integrity of their territories.

The seminar heard from Indigenous peoples from across Malaysia who are protecting and conserving their customary territories. For example, in the foothills of Mount Kinabalu, the Indigenous Dusun community of Kiau voluntarily set aside and is seeking legal recognition for a 1,024-acre forest conservation and heritage area that seamlessly weaves together both nature and culture. “We have formulated a protocol to govern the conservation and use of our forest in accordance with our customary laws and practices,” said Sintiah Samanding, Advisor of Persatuan Memulihara Warisan Tradisi dan Alam Semulajadi Koisaan Momogompi Tinungkusan Gulu-Gulu om Kotolunan Sandad (GOMPITO) in Kg. Kiau. “We are also working to revitalise our traditional forest practices such as a unique language that we can only use in the forest (boros puru) and giving respect to the forest spirits (mamatang/mamason).”

The seminar also learned about the legal and policy recognition of ICCAs. Internationally, ICCAs are recognised by the International Union for Conservation of Nature (IUCN) and by the 196 Parties to the United Nations Convention on Biological Diversity (CBD) – which includes Malaysia – as fundamental to conservation. For example, ICCAs can be recognised as one of the four main governance types of protected areas, subject to their free, prior and informed consent and full and effective participation. In Malaysia, at least three national and state policies explicitly recognise ICCAs, including the National Policy on Biological Diversity 2016-2025, Sabah’s Strategic Plan of Action for the Heart of Borneo Initiative 2014-2020, and the Sabah Biodiversity Conservation Strategy 2012-2022. equity in conservation,” said Thomas Jalong, Secretary General of JOAS and Council Member of the ICCA Consortium, a global association dedicated to promoting recognition of and support for ICCAs. “Now that ICCAs are recognised both internationally and within Malaysia, Orang Asal need government, NGOs, academics and others to join hands with us in ensuring this recognition is implemented appropriately with our communities on the ground, where it matters most.”

In the afternoon, the seminar featured a panel of guest speakers from all three regions, including representatives of Indigenous peoples, NGOs, academia and government. Each spoke about their perspectives on ICCAs and how they could support them.

“ICCAs contribute to achieving international commitments such as the Sustainable Development Goals, including Goal 2 (“Zero hunger”), Goal 13 (“Climate action”) and Goal 15 (“Life on land”),” said Prof. Datuk Dr. Denison Jayasooria, Chairperson of the Malaysia CSO-SDG Alliance. “It is clear that Indigenous peoples should be at the table in decision-making processes that affect them and their territories, lands and resources.”

Earlier in the day, YB Willie Anak Mongin, Parliamentary Representative for P198 Puncak Borneo, noted that the 9 August celebrations of the UN International Day for Indigenous Peoples hosted by the Selangor and Sabah State Governments (the latter for the first time) indicates a readiness of the current administration to support Indigenous peoples. “With the new government,” he said, “now is the time to place more focus on Indigenous peoples’ issues and set up a special committee at the national level.”

On 9 August, JOAS also hosted a celebration of the UN International Day for Indigenous Peoples at the same venue in Bau, Sarawak, with cultural performances, traditional sports, Indigenous handicrafts and more.