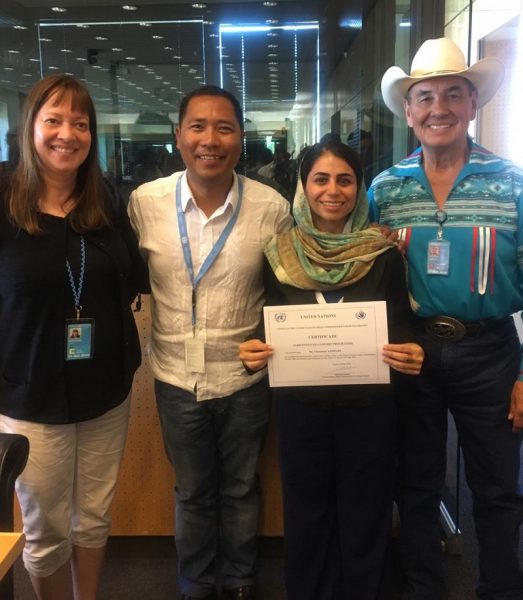 The Office of the High Commissioner for Human Rights (OHCHR) established the Indigenous Fellowship Programme in 1997 to help empower indigenous peoples. It is a training programme that aims to enhance the knowledge of indigenous peoples on existing international human rights instruments and mechanisms, so they can more effectively advocate for the rights of their communities and raise their concerns at the international level. At the end of the Programme, Fellows are also in a better position to share and give training sessions on the knowledge gained with their indigenous peoples and organizations.

I had the honour of being selected for this prestigious Programme and spending four weeks in Switzerland from 24 June to 19 July 2019. The training combined theoretical sessions with briefings on the UN system, OHCHR mandate and activities, and international human rights instruments and mechanisms (such as the Human Rights Council, treaty bodies and Special Procedures), including those more specifically dealing with indigenous issues (UN Declaration on the Rights of Indigenous Peoples, ILO Convention 169, the Permanent Forum on Indigenous Issues and Expert Mechanism on the Rights of Indigenous Peoples, EMRIP). Practical assignments and exercises also helped better integrate the theory. Fellows were also given the opportunity to actively participate in the annual meeting of EMRIP. Additionally, we were introduced to the work of other UN and specialized agencies (ILO, WIPO, UNESCO, UNICEF) and of Geneva-based human rights NGOs, including DoCip.

In the fourth week of the Fellowship Programme, we participated in the twelfth session of EMRIP. One of the main subjects discussed was “Study and advice on Indigenous peoples’ rights in the context of borders, migration and displacement”. Most of the indigenous peoples in Iran are mobile and migrating in their territory from summering to wintering grounds and vice versa. Despite the national law in support of migration routes, nomadic pastoralists face many problems in continuing their migration. Thus, we prepared and delivered the following statement in support of migration of indigenous peoples: Agenda Item 3: Study on Indigenous peoples’ rights in the context of borders, migration and displacement

Thank you Madam Chair. I am Ghanimat Azhdari an indigenous nomadic pastoralist from Iran and a fellow in the indigenous fellowship program.

I am speaking on behalf of the ICCA Consortium, an international organisation uniting indigenous peoples, local communities and their supporters from 80 countries, and in particular its founding Member Cenesta, all from Iran.

The ‘territories of life’ of mobile indigenous peoples include summering grounds, wintering grounds and the in-between migration routes and midway stations.  They have been governed, managed and conserved by indigenous nomadic pastoralists for millennia. Migration is part of our cultures, livelihoods, lifestyles and vitality, and our key strategy for nature conservation.

The Expert Mechanism recognizes the need to better examine the nexus between migration and indigenous peoples.   We agree.  And we believe that the limited work done to date, including lack of disaggregated data on indigenous migration, limits but also motivates this study.

We encourage the national delegations represented at EMRIP to:

1.      Support indigenous nomadic pastoralists to document the territories they govern, manage and conserve as ‘territories of life’ with the full participation of our own elders, women and youth, including demarcation of migration routes, summering and wintering grounds, as well as broader indigenous knowledge and ecological assets.

2.      Appropriately recognise and support the governance, management and conservation of territories of life by indigenous peoples’ and local communities, including by using their traditional and local knowledge, practices and institutions and towards climate change mitigation and adaptation efforts.

3.      Impede any disruption and misallocation of land in the ‘territories of life’ – including crucial migration routes—of indigenous nomadic pastoralists, thereby securing our livelihoods and food sovereignty.

We much appreciate the support of EMRIP in this regard. Thank you very much Madam chair.

The statement was accepted with applause from all audience and there was no objection. Some participants from India and AIPP agreed and supported this position. The UN documentation centre asked for the full text of statement.