For millennia, the world’s coasts and oceans have supported a way of life for tens of millions of people. But increasingly, our oceans are being viewed as economic assets ‘worth at least USD 24 trillion’ and ripe for development. Oceans are an inevitable part of sustainable economic development, but growing evidence suggests that current visions of growth don’t adequately consider equity.

By Kate Bevitt
With an interview of Vivienne Solís Rivera, ICCA Consortium Council Member with special responsibility
about ICCAs and gender issues, and representative of the organization CoopeSoliDar R.L.

“There absolutely must be changes, and even transformations, to ocean governance and to the fisheries sector to improve economic, environmental and human well-being outcomes,” says lead author Dr. Philippa Cohen, Program Leader – Resilient Small-Scale Fisheries, WorldFish. 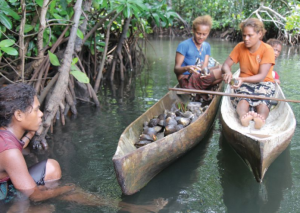 In developing countries fish caught by SSF is an important source of protein and essential micronutrients. Men, and women, are active in SSF harvesting, post-harvest processing and marketing. Photo by WorldFish/Wade Fairley, Solomon Islands.

In recent years, interest in the blue economy has grown rapidly across the world, but it continues to be described and interpreted in different ways. The new paper, drawing on the work of prominent marine social science researchers, reinforces that a key challenge in ocean governance is protecting the social benefits of small-scale fisheries. This is by ensuring the human rights of fishers, distributing growth benefits equitably and maintaining the wellbeing of coastal communities.

But Cohen says that in high-level Blue Economy dialogue, social objectives are relatively overlooked, considerations of food security and human rights receive little attention, and small-scale fishers are notably underrepresented. “The narrative that new ocean governance regimes will result in win-win-win (economic, ecological and social objectives) scenarios is certainly enticing—but the same strategies being proposed for the oceans haven’t produced environmentally-sustainable and equitable outcomes on land. How can we expect better at sea?These strategies need more thought and must recognize the incompatibilities that exist and the relatively rare instances where triple wins might be realized.”

In the Seychelles, a group of 115 islands in the Western Indian Ocean whose exclusive economic zone includes 1.4 million km2 of ocean, the blue economy is receiving a lot of attention. In 2015, the government of Seychelles created a Department for the blue economy and, in a historic debt-for-nature deal, bought back $30 million of debt from Paris Club creditors using a loan and grants from international conservation organizations. This was in exchange for protecting 30 percent (410,000 km2) of its exclusive economic zone through a marine spatial plan. The country has since launched its Blue Economy Strategic Roadmap (2018– 2030) and the first-ever sovereign blue bond with the support of the World Bank, which raised USD 15 million from international investors.

“[The bond] will greatly assist Seychelles in achieving a transition to sustainable fisheries and safeguarding our oceans while we sustainably develop our blue economy,” said Vincent Meriton, Vice-President of the Republic of Seychelles, who announced the bond at the Our Ocean Conference in Bali in October 2018. Yet forthcoming research, which explores the high-level perspectives of policymakers on the blue economy in Seychelles and the winners and losers from its implementation, finds that pursuing a triple-bottom line is ambitious and difficult trade-offs are likely necessary. “While trade-offs and interdependencies between environmental and economic interests are recognized, the social dimension is an overlooked issue. It will be difficult to address these tensions without explicitly recognizing them first,” explains lead author Marleen Schutter, PhD candidate, Lancaster University.“Of the three perspectives held by policymakers on the blue economy in Seychelles, only one mentions livelihoods, social inclusion, and equity; this perspective is found to have very little influence.”

Initially, says Hoarau, there were no consultations with the fishers when the first proposal for the marine spatial plan was tabled. “The original plan didn’t consider the needs and concerns of small-scale fishers—it would have been catastrophic for small-scale fishers. It was only after FBOA objected that more discussions were held with affected stakeholders.”

This pushback on the marine spatial plan from fishers and others shows that it is not possible to cut and paste blue economy approaches from one country to the next, says Schutter. “Seychelles has explicitly positioned itself as a pioneer of the blue economy for island states and other African countries. But what ultimately works in Seychelles— as a high-income country with a small population and history of strong social support—may not work elsewhere. It’s important to understand what makes small islands and other countries unique, and investors in the blue economy are encouraged to look beyond what can be reduced to economic terms.”

Getting the balance right for all ocean users requires taking into account the social, cultural, environmental and economic aspects of small-scale fisheries. But this balance is missing in Costa Rica says Vivienne Solis Rivera, a biologist and founder of CoopeSoliDar R.L, a cooperative of people who appreciate differences and share strong values in solidarity.

In Costa Rica, the government is pursuing a blue economy strategy focused on further developing the country’s 800,000 km2 of marine territory by pursuing market-oriented approaches in return for a big loan from an international bank. “Blue economy discourse is not focused on wellbeing and food security and distribution of benefits, but on market-oriented aspects.” Solis Rivera says this approach fails to provide a ‘fair and just distribution of richness’.

“The role of women and youth in the pre- and post-production activities of the value chain are overlooked. And issues relating to the situation of indigenous people marine territories have been left out.When it comes to clean markets, for example, usually only the big fishing industries can comply, leaving the small-scale fishers behind again.”

To highlight the concerns of women and men intertwined in the ocean sector, Solis Rivera uses the term ‘blue justice’, which represents a growing global movement calling for greater social justice for small-scale fisheries. “The blue economy concept consists of very unfair conditions under which small-scale fisheries develop and the view is only based on an economic perspective, which does not support the mostly informal artisanal fishers,” says Solis Rivera, who works with communities in Central America to support community governance of fisheries.

Solis Rivera explains that small-scale fisheries represent one of the last productive activities for Costa Ricans in the country’s coastal areas, which are characterized by high poverty rates and a lack of livelihood opportunities. “Slowly, this important activity has been taken over by others like tourism and services, both of which do not provide the benefits and maintain local culture and space like small-scale fisheries do.”

The growth of tourism is a big worry for fisher and processor Sara García from Cabuya village, Península de Nicoya, on the east coast of Costa Rica. The small fishing village is the site of the country’s first nature reserve established in 1963—Cabo Blanco Reserva—and is only a short distance from the tourist hotspots of Montezuma and Santa Teresa. “We could disappear as small-scale fishers as we’ve seen other places where tourism has taken over,” says the mother-of-three, who has worked in the fishery for the last 20 years.“We say yes to tourism but to have it with a limit. We need to have an equilibrium; we want to keep being fishers.”

The lack of adequate policy safeguards to protect small-scale fisheries and the food they generate will likely have a significant effect on the 3000 formal and 15000 informal fishers and their families, as well as those who work in the processing, trading and marketing activities. “We [small-scale fishers] need to be united for our productive sector to be alive. We need to keep fighting to maintain our work and important role in our communities,” says García.

Ensuring the rights, interests and voices of small-scale fishers are heard and respected is critical to ensuring an equitable and inclusive blue economy. This challenge led the Food and Agriculture Organization of the United Nations (FAO) to facilitate the development of the Voluntary Guidelines for Securing Sustainable Small-Scale Fisheries in the Context of Food Security and Poverty Eradication (‘SSF Guidelines’). Importantly, the inputs of around 4000 fisher, government and community representatives from over 120 countries are incorporated in the guidelines, which were endorsed by 143 member states in 2014.

“This poses a challenge for governments in terms of policy coherence, institutional coordination and collaboration, to ensure that issues such as decent work and social protection are not forgotten,” says Franz. “Empowerment and participation of small-scale fisheries actors in governance and development require that these actors are well organized and have the organizational ability and institutional possibility to meaningfully engage in relevant processes.”

In addition, research initiatives like ‘Illuminating Hidden Harvests’, which looks at the contributions, impacts and drivers of changes of small-scale fisheries, are critical to providing policy-relevant understandings to decision makers and empowering advocates with key data. Despite the challenges, there are numerous examples of the SSF Guidelines being used and referred to by fisherfolk organizations, conservation NGOs, intergovernmental organizations and governments.

For example, Tanzania and Senegal have established national multi-stakeholder task teams that are working on National Plans of Action for the implementation of the SSF Guidelines. Costa Rica and Peru are working on legislation in support of securing sustainable small-scale fisheries, and India has included the SSF Guidelines in their 2017 Marine Policy.

These examples, says Franz, indicate positive progress and add to the growing momentum around small-scale fisheries. There’s sustainable development goal 14.b, which is dedicated to promoting access for small-scale artisanal fishers to marine resources and markets, and 2022 has been designated by the United Nations as the International Year of Artisanal Fisheries and Aquaculture. “All partners and actors should, therefore, strive to seize those opportunities and to rethink small-scale fisheries, with the full participation of the small-scale fisheries actors, and with an approach that cuts across sectors to ensure social, economic and environmental sustainability.”