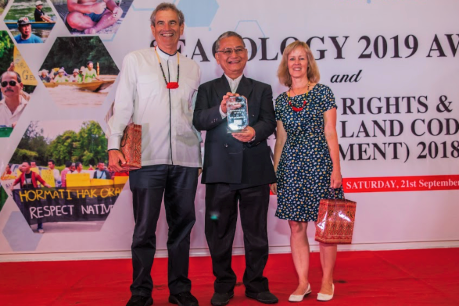 By SAVE Rivers – Save Sarawak’s Rivers Network, Member of ICCA Consortium.
Directly extracted from their website.

Miri City, Sarawak on the island of Borneo, Malaysia. Peter Kallang, a member of Sarawak’s indigenous Kenyah community, has been awarded the international Seacology Prize for leading a successful campaign to halt the building of a series of mega-dams on Borneo. The dams would have flooded vast tracts of land, including pristine rainforests, and dislocated tens of thousands of indigenous people. The Seacology Prize is awarded annually to a person who has shown exceptional achievement in preserving island environments and culture.

The Malaysian state of Sarawak is home to some of the world’s most critically endangered and biodiverse forests. Indigenous communities, including the Kenyah, Kayan, and Penan, who have lived in harmony with their environments for generations, now face encroachment by timber companies and palm oil plantations. A huge threat came from Sarawak’s largest-ever industrialisation project for 12 mega-dams – the Sarawak Corridor of Renewable Energy (SCORE). The SCORE plan included the Baram dam, which would have, without consent or consultation, displaced 20,000 Kenyah people and flooded 400 square kilometers of rainforest.

In 2011, when he was 61, Kallang, a lifelong campaigner for the people of Sarawak and previously a Shell engineer became the Chairman of SAVE Rivers, a Sarawak NGO. He immediately focused on stopping the Baram dam. With the support of community leaders, he galvanized protests and demonstrations, including river flotillas in towns and remote rural areas. The largest of these protests were two concurrent two-year blockades. One blockade prevented the building of the access road to the proposed site of the Baram dam, and the other stopped all preconstruction at the site. Simultaneously, Kallang was raising awareness and building coalitions internationally, and confronting investor audiences in Australia and Norway.

Kallang also enlisted experts to prove to government and international funders that a better future lay with small-scale renewable energy projects, which would provide long-term community and environment benefits, rather than mass displacement and environmental destruction. In 2016, the government capitulated, and the Baram dam and SCORE were cancelled.

Duane Silverstein, Seacology’s Executive Director, said, “Peter Kallang is a disciplined, passionate and thoughtful leader. He is a committed activist and a courageous champion of indigenous rights who has endured attacks to his reputation, risks to his freedom, and even rifts within his own family and friends because of his outspoken position against destructive development. His approach and courage are an inspiration to all island communities seeking to protect their lands and ways of life.”

Current work and fears for the future

Kallang and SAVE Rivers are now focusing on renewable energy for Sarawak, partnering with pioneers in sustainable, alternative energy systems to bring clean energy to villages. Seacology is one of those partners. Earlier this year, Kallang spoke at a ceremony in the Sarawak village of Long Liam, where a micro-hydro system, built with support from Seacology, SAVE Rivers, and others, was officially handed over to villagers. The villagers, who had fought the Baram dam, stressed that such successful micro-hydro projects prove that rural development is possible without enormously destructive dams. These projects also help preserve Borneo’s precious forests, because logging would damage the watersheds necessary for micro-hydro systems to work.

In March 2019, SAVE Rivers hosted Sarawak’s first community-based conference on electricity generation. There were more than 300 participants, including representatives from both national and state politics (together for the first time), and over 50 community leaders from across Sarawak.SAVE Rivers is also supporting the Penan community to map and apply for community control over an expansive, incredibly biodiverse region in northern Sarawak – also for the first time in Sarawak’s history.

Meanwhile, Kallang fears that Sarawak’s mega-dam plans could be revived by the new cash-strapped Sarawak government. The Trusan mega-dam was announced in 2017. Kallang came out in opposition at the time, saying that construction of these new dams would be a contravention of previous government policy and would be wildly in excess of projected energy needs. Nothing very much has been heard since, but the government began building roads to the site of the proposed Baleh dam in 2018 with an anticipated completion date of 2025. The completion of the Baleh dam is thought to be a precursor to the commencement of work on the Trusan dam.

Meanwhile in neighboring Sabah, communities are campaigning right now against the Papar dam, which will displace indigenous communities with similar human rights implications to the Baram dam. Kallang is supporting this campaign.

Peter Kallang said: “I am truly honored to receive the Seacology Prize. It comes at a time when the spotlight of attention needs to return to the destruction and social injustice that lie at the heart of mega- dams in Sarawak and the Island of Borneo, while we continue to demonstrate the value of sustainable community-based renewable energy projects.”

Seacology is a nonprofit organization in Berkeley, California that works to preserve the habitats and cultures of islands around the world. Many island communities face a choice between protecting their natural resources and pursuing economic development. Seacology’s win-win approach recognizes it and gives islanders an economic incentive to preserve their resources. When an island community wants to protect a forest or marine area, Seacology offers a grant that will benefit the whole community—for example, a school, ecotourism center, or water system. With more than 300 projects in 60 countries, Seacology has helped preserve almost 1.5 million acres of marine and land habitats. Seacology was awarded a 2019 United Nations Momentum for Change award for its climate change work, and has been nominated for the 2020 Nobel Peace Prize.

The $10,000 Seacology prize, now in its 29th year, is awarded annually to a person who has shown exceptional achievement in preserving island environments and culture.