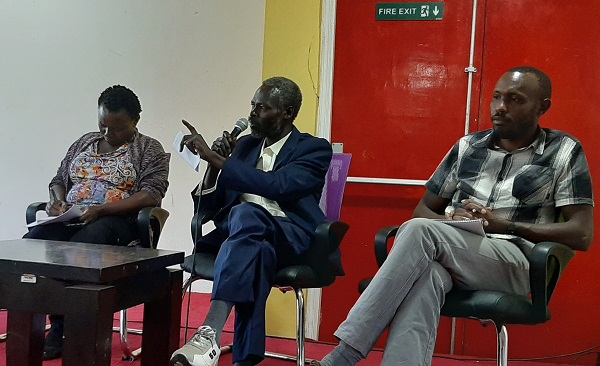 “Community control of land” sounds pretty straightforward. In practice, however, it can be limited, or difficult to achieve because of high property costs and the social, legal, and financial challenges of making property ownership communal. Land issues across the world are emotive and often volatile. The perennial argument of individual, communal and government rights over land, and the more sensitive resources attached to those lands, have created stark lines between these parties which often leaves communities out in the cold given that power lies very heavily on only one of these sides.

Natural Justice, as an African organisation steeped in community rights and environmental justice, put together a concept that would open dialogue and collaboration and effective information-sharing between affected communities, thought leaders, relevant stakeholders, and the general public in the form of an Environmental Justice Forum [1].

The Forum exists to ensure conversations around our thematic areas of Extractives and Infrastructure, Conservation and Customary Use, Traditional Knowledge and Benefit Sharing, and the Governance of Land and Natural Resources, are made accessible and relevant. Our first Forum tackled the issue of Community Land; Governance and Tenure, with specific reference to the implementation of decision of the African Court on the rights of the Ogiek people to the Mau Forest.

Globally, Indigenous Peoples and local communities have formal legal ownership of just 10% of the land, and have some degree of government-recognized management rights over an additional 8%. Roughly 60% of land across the community-owned or controlled world is in five countries: China, Canada, Brazil, Australia and Mexico. That means at least one-third to one-half of the world’s land is informally held by Indigenous Peoples and local communities under customary tenure arrangements alone. Gaining legal/formal recognition of these lands means that indigenous and local communities are no longer “vulnerable to illegal, forced or otherwise unjust expropriation, capture and displacement by more powerful interests.”

With recurring arguments from the Government of Kenya that responsibility for natural resources is vested in the state for the people of Kenya through the mechanism of public land [2], there can be inferred a decided lack of will from the government to affect the decision. Notably, the global trend is moving towards community ownership and management of resources because there is a strong and compelling environment and development case to be made for securing collective land rights. It offers a low-cost, high-reward investment for governments and their partners in developing countries to meet national development objectives and the 17 Sustainable Development Goals. Researchers and practitioners have been clear that securing community lands is a cost-effective climate mitigation measure for countries when compared to other carbon capture and storage approaches. Evidence from a task force set up to investigate deforestation in the Mau forest complex showed that there has been rampant clearing of old growth forest for logging under the watch of the Kenya Forestry Service. While we struggle with the loss of thousands of acres of forested land in Kenya, many areas in Latin America and around the world are recording annual deforestation rates on tenure-secure indigenous lands that are significantly lower than on similar land that lacks tenure security. More locally, there have been great strides in neighbouring Tanzania to secure community tenure through legislation that have been relatively successful. The Forum was able to highlight that indigenous forest people in Kenya are not only willing, but are able to do the work that would see restoration and rehabilitation of this important asset.

Why then is the conversation in Kenya still plagued with colonial sentiments of state ownership and antiquated beliefs that communities cannot protect, preserve, and manage land? The Mau forest complex forms the largest closed canopy forest system in Kenya, it is the most important water catchment in Rift Valley and western Kenya, and is a natural resource of national importance whose condition has a major impact on the tea, energy and tourism sectors. This critical ecosystem helps secure the provision of water supply to urban areas for domestic and industrial use and supports the livelihoods of millions of people living in the rural areas, not only in Kenya, but also in neighbouring countries.

The socio-economic importance of the forest invites a lot of political attention-making processes, like the implementation of the African Court decision, exponentially harder. During the Forum, the representative from the Ogiek people of Mau forest, Mr. Daniel Kobei, and the Ogiek people of Mount Elgon, Mr. Peter Kitelo, along with moral support from a representative from the Sengwer community of the Embobut forest, gave their hands-on experience of how they have gone through the process of securing their ancestral lands, and why it is absolutely crucial for them to have that connection to ‘home’, the only home they’ve known. Their decade long struggle has borne little fruit, and the historic decision of the African Court feels like a victory in name alone as they go through multiple task forces set up to affect the implementation, but who end up not getting much done at the end of the day.

What has come out clearly from this Forum is that communities have the knowledge and willingness to manage and safeguard their land, they are willing to work with the government, as a key and relevant partner, to realise a situation that will benefit the community, the country, and the region. Notably, the Ogiek community of the Mau forest have already put together a protocol that would help govern a management regime that would map out conservation and rehabilitation as its main goal.  Mr. Peter Kitelo went further to provide a concrete solution to this recurring debate. His community have taken it upon themselves to pilot a program in the Mt. Elgon forest. The indigenous Ogiek community of this area have taken certain parts of the forest under their stewardship as a way to prove that community management through land tenure is possible.

The common thread from every member of indigenous forest communities represented at this forum was this that land and the management thereof needs to be vested in the people who have ties to the land. The government has a responsibility to ensure that the rights of its citizens are safeguarded and promoted, recognition of existing indigenous ownership of land falls within these responsibilities. One clear take-away from the Forum was that we need to have these conversations with the relevant institutions present to ensure a robust discussion and possible solutions or guidance on the spot for some of the issues coming up.

While the conversation remains mired by political influences, we can conclude that the key issues are essentially simple; communities have proven to be better conservators of natural resources, security through tenure is a low cost means to achieve big ticket results, Kenyan law already provides for a situation where land is held by communities[3] and, finally, that Kenya needs to shake off the remnants of colonial governance and find a new way towards land and resource management that puts trust in its people.