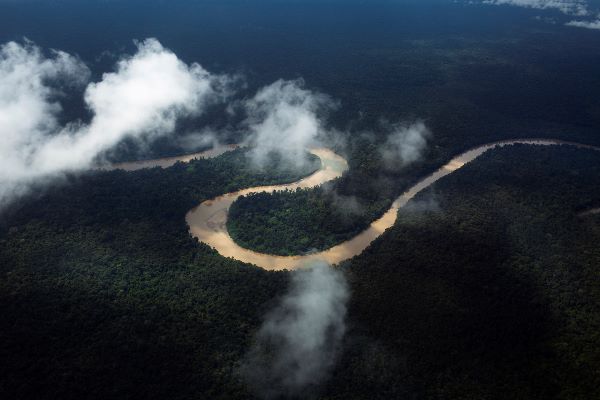 Despite having been long divided by the border between Ecuador and Peru, the Shuar Arutam people and the Wampis Nation share the same ancestors and land. Their extensive adjoining territory covers 1 million 600 thousand hectares of Amazonian forest, and their daily practices and the extraordinary way they live in their territory protects life and biodiversity.

Now, after three decades of living apart, these two peoples are meeting again to weave renewed ties and define themselves as a single integral territory of life.  As part of this process, the Shuar Arutam people and the Wampís people are creating shared territorial defense strategies in the face of the threats that plague their land.  Together, they dream of a bi-national autonomous territory, one that transcends borders.

This process of reunion was made possible thanks to a series of meetings and opportunities to exchange experiences during the past year.  The first meeting took place in February 2019, in Soledad, the capital of the Wampís Nation. The participants included delegates from both groups of the reuniting peoples and from CONFENIAE; the Sapara Nation and Sarayaku; as well as Rosario Barradas, a delegate of the ICCA Consortium in Latin America.   The video “Sentir , Decidir, Cuidar” (Feel, Decide, Sustain) was created as a result of this meeting.

Following the agreement made at the February meeting, a second meeting was held on August 16 and 17, in Sucúa, Ecuador. There,  the two peoples decided to move forward with the process of “constituting the proposal to form an integral territory of the Wampís Nation – Pueblo  Shuar Arutam as a strategy for demanding collective rights, autonomy, and self-determination, in the face of threats from public policies such as oil, mining and conservation projects that affect our ancestral territories.” As a strategic step, it was felt that this proposal should be made within the framework of the ICCA Consortium, which would help it to be supported and promoted as a pioneering initiative in the region.

The two groups agreed to promote an in-depth analysis process to discuss registering the integral territory in the ICCA Registry, and what form the governance of this territory would take, among other issues.

The proposal for an integral territory of life was presented at the Latin American Congress of Protected Areas (Lima, October 14-17, 2019), where indigenous peoples and local communities demanded their recognition as key actors in the conservation and consolidation of their collective and territorial rights.  As Josefina Tunki, the president of the Shuar Arutam People stated, “In the future we want to build a single nationality, with a single concept of struggle, with women and men acting together, without division, as owners of this territory.  We are on a path that has no end. ”