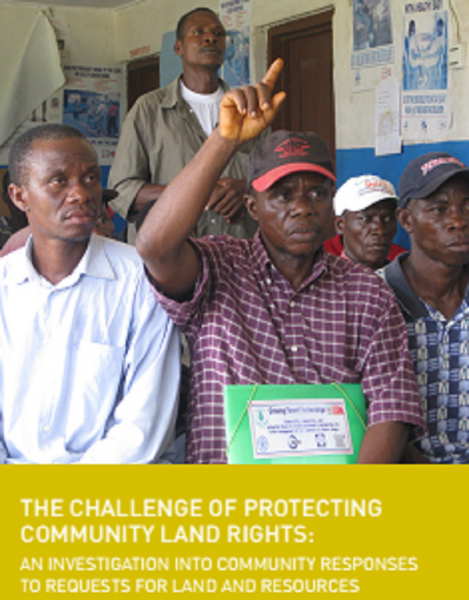 The Challenge of Protecting Community Land Rights: an Investigation into Community Responses to Requests for Land and Resources, by Rachael Knight, Namati, 56 pages, 2019.

From 2009 until 2015, Namati and its partners, the Land and Equity Movement in Uganda (LEMU), the Sustainable Development Institute (SDI) in Liberia, and Centro Terra Viva (CTV) in Mozambique supported more than 100 communities to document and protect their customary lands rights. In late 2017, after at least two years had passed since the last communities had completed the process, Namati evaluated the impacts of its work on communities’ responses to outsiders seeking access to community lands and resources.

Since completing their land protection efforts, 46% of the 61 assessed communities had been approached by outside actors seeking community lands and natural resources. In 24 out of the 35 instances described, the community either accepted the investor’s request or reported that they were “not consulted” or “were forced” to accept the request. Egregiously, not one community signed a contract or was left with a written copy of any agreements. Together, the communities’ stories illustrate how government officials leverage their power and influence to override citizens’ land rights in order to:

•       Claim land owned by villagers for state projects without paying compensation;
•       support bad faith land grabs or dubious “consultations” for international investors; and
•       facilitate land grabs for investments that they or their families and cohorts have a personal stake in.

Overall, the stories of these interactions suggest that community land documentation initiatives do not, on their own, sufficiently balance the significant power asymmetries inherent in interactions between rural communities and government officials, coming on their own or on behalf of potential investors. These outcomes were prevalent despite community members’ articulation that they knew their legal rights in such situations – and they were the same independent of whether or not the community had a formal, government-issued document for its land rights (Mozambique); had legal private ownership under law (Uganda); or fought the land grab with external support from NGOs and political representatives (Liberia). By showcasing the rampant injustices faced by these communities, the report aims to shed light on how best to address such imbalances of power and strengthen global efforts to protect community land rights.

Read the full report here or its executive summary here.