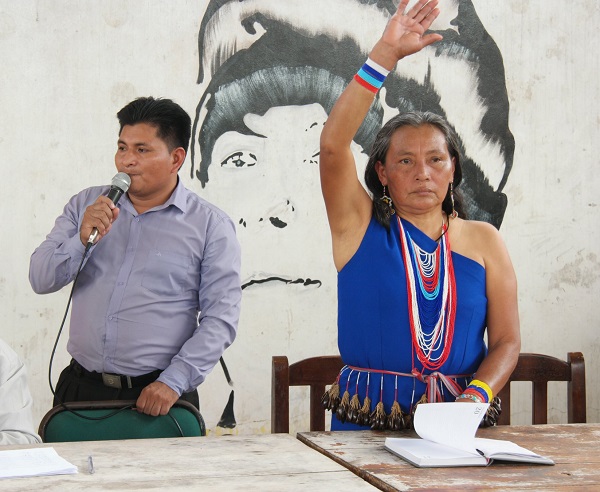 The Shuar Arutam People (CGPSHA – Consejo de Gobierno del Publo Shuar Arutam, Member of the ICCA Consortium) have officially registered their territory in the ICCA Registry of territories of life, managed by the World Conservation Monitoring Centre (UNEP-WCMC). On November 22, 2019, after a community consultation process, the Government Council formalized the resolution. “We made this decision with the strength of Arutam, our supernatural protector principle, who gives a particular power to us, the Shuar People,” said Josefina Tunki, President of PSHA.

The Shuar Arutam people, custodians of unique ecosystems in the region

The territory of the Shuar Arutam people covers 232,533 hectares of tropical rainforest in the Cordillera del Cóndor of the Morona Santiago province in Ecuador. It connects the tropical Andes biodiversity hotspot with the large Amazonian tropical forest plains. In this extensive territory, only 20,636 hectares have suffered intervention, and 205,072 hectares remain very well conserved, covered by forest with many healthy water bodies and wet shrub vegetation. The conservation of forest and biodiversity in the territory of the Shuar Arutam People represents an extraordinary contribution to the country and for humanity in the face of the current global climate emergency. It also counters national public policies which for decades have promoted the conversion of land use for the exploitation of subsoil resources.

In fact, 56% of the PSHA territory is threatened by large-scale extractive concessions that also imperil the Cordillera del Cóndor. There are four large areas with native vegetation found only in this particular geography and topography. These areas are home to unique biological niches such as the vegetation of tepui plateaus, a one-of-a-kind ecosystem in the region; and they provide an important refuge for threatened animals such as the spider monkey, night monkey, pacarana, and river otter.

Three territories of life are now registered in Ecuador

The way of life of the PSHA people and their capacity to manage and care for their territory rely on the guarantee of water as an ecological and political imperative, now and into the immediate future, when scarcity of good quality water (without contamination) threatens the country and the Amazonian Basin. At present, there is abundant water in the region, and its preservation is key, not only for life, but from a cultural perspective. Galo Chup, leader of the PSHA, noted that, “The waterfalls are sacred to the Shuar culture.” Forests and water are indispensable common goods for their existence as an indigenous people, and they constitute the material and spiritual basis of the Shuar Arutam people. Faced with the challenges that these communities and peoples are confronting in defense of their territories, official registration is a valuable tool to gain recognition for the multiple values ​​of territories of life and to highlight the contribution of indigenous peoples and local communities to the conservation of biodiversity in the world.

For more about the Shuar Arutam People, see :