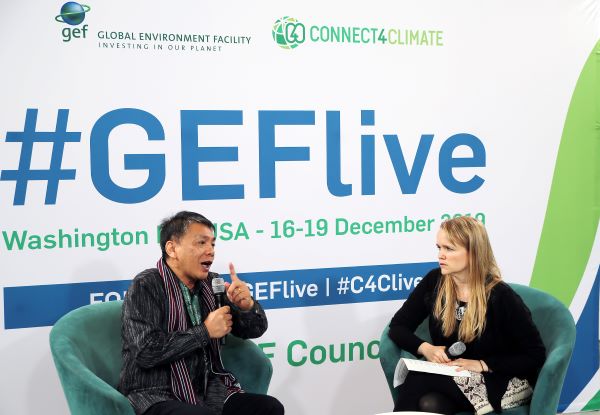 In December 2019, Giovanni Reyes was advocating for ICCAs—territories of life at the 57th meeting of the Global Environment Facility (GEF) Council in Washington, D.C., in his complementary roles as President of the Philippine ICCA Consortium, member of the GEF Indigenous Peoples Advisory Group and Honorary member of the Global ICCA Consortium. Giovanni was interviewed for the event’s livestream by Ms. Sarah Wyatt (Focal Person for Indigenous Peoples, GEF Secretariat). He spoke about his work on ICCAs—territories of life in the Philippines and the diverse contributions of indigenous peoples and communities to nature conservation around the world. The following is an abridged interview transcript, edited for clarity. You can watch the interview here:

Q. Tell me about the community where you come from and the work that you do.

I come from a town called Sagada in the Mountain Province of the Cordillera Region, North of the Philippines. It is a limestone valley that cuts through pine forests, rice terraces and a network of sub-terranean rivers. The people are indigenous, specifically belonging to the Kankanaey tribe which in turn belong to the larger collective group of Cordillera Indigenous Peoples called Igorots.

When we say mapping, this is about translating indigenous peoples knowledge into its physical dimension in the form of 3D models that they can utilize later for evidence-based conservation planning.

Mapping is followed by Resource Inventory, a systematic method aimed at assessing the conditions of surrounding forests within a traditionally defined territory. This is determining the state of health of forests through scientific means of transecting and utilizing local knowledge in the identification of plant species. The identified species are later analyzed for their evenness and diversity. The analysis of findings are then provided to the community for their use – again, as evidence-base for conservation planning. The inventories helped indigenous communities realize the impact that their resources can do, the extent of resources they own resulting in increased sense of ownership, control, surveillance and enforcement. Here is a combination of use of science and knowledge of indigenous peoples, addressing climate change and biodiversity where they matter most.

Q. Why is it really important to support indigenous peoples when protecting the environment?

Indigenous peoples’ traditional governance systems are acknowledged to be the most effective in biodiversity conservation without them really spending millions of money, unlike nation states. Reports by the World Bank itself, the UN Convention on Biological Diversity and the science-based Center for International Forestry share similar findings that levels of biodiversity are higher in areas managed by indigenous peoples compared to “strict protection zones” declared by governments under their Protected Area systems.

This puts indigenous peoples as chief guardians of ecosystems and it is no accident that our traditional territories coincide with 80% of the planet’s biodiversity. Recognition and support for our traditional resource management systems will ensure supply of water especially for lowland agricultural areas and therefore, contributing to food security. Globally, indigenous peoples’ territories form a planetary carbon sink. Respect for indigenous peoples’ rights means effectively combatting the impacts of climate change. But we should not just deal with impacts… global efforts must address the root causes of climate change.

Q. What are some of the challenges that indigenous peoples face when trying to conserve their lands and maintain their livelihoods?

One of the challenges we face is overlap of protected areas over ancestral domains, as well as the entry of projects that are often described as “for the national development” considered by indigenous communities as destructive to their human and natural resources, including direct exploitation like large scale extractive projects. Such projects not only destroy biodiversity sites, but pollute rivers and oceans. Would an indigenous community be willing to sacrifice eight generations of its people just so national development can occur? Would people on national scale, if informed thoroughly, be willing to enjoy “development” at the demise of communities that freely provide them clean water and clean air in the first place? So the challenges here include a triadic conflict between mining and dams, protected areas and indigenous peoples’ rights.

Q. Indigenous peoples are also key in fighting climate change. Any examples of this in the Philippines?

Support for indigenous peoples’ beliefs, knowledge and practices are key in forest protection that in turn are important in absorbing carbon dioxide that trigger climate change. They can effectively reduce greenhouse gas emissions.

For example, the belief  that certain areas are taboo for human use resulted in prevention of deforestation and over-exploitation of these spaces and therefore contributing to the thickness of forests and high level of biodiversity.

Indigenous peoples’ knowledge is important as source of valuable information in terms of local impacts, risks and vulnerabilities arising from climate change impacts. Their knowledge is also valuable in terms of adaptation and mitigation options that should inform policy and decision-making.

Q. On The Philippine ICCA Project

First, this is a GEF-financed project in which my organization – the Philippine ICCA Consortium – is key partner and the main decision maker. It has mapped 148,000 hectares of ICCAs from the target of 118,00 hectares in ten selected land and seascape sites, covering three geographic areas from Luzon, Visayas to Mindanao. Because of involvement of our indigenous communities, it has put the country in the forefront of inclusive conservation at least for the Asia region, so that the government of Myanmar for instance visited the country to learn about how indigenous peoples moved their government in that rank. I doubt if the country would reach such distinction without indigenous peoples’ participation. We want to escalate the outcomes within the country and out into other Asian countries where possible.

Second, the participation of science-based personnel from government, academy and civil society allowed for an exchange between science and indigenous knowledge. This mix is a powerful tool for empowerment. Why? It’s the communities deciding and government and CSOs merely facilitate and provide technical support.

Third, the project influenced the inclusion of provisions recognizing indigenous peoples traditional resource use management in Protected Area systems so that a considerable number of Provincial Environment and Resource Officers and Protected Area Superintendents are open to adopt the process of identifying community-conserved areas and escalating such processes in other areas.

The government in this case is among the primary beneficiaries – in terms of political mileage – to the environmental knowledge provided by indigneous communities.