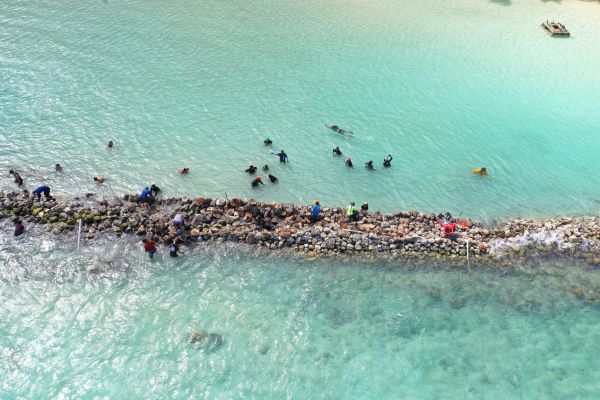 From February 6–9, 2020, over 170 indigenous scientists and grassroots aquaculture practitioners from around the Pacific convened on the east side of the island of Oʻahu for a historic gathering. The indigenous aquaculture summit and cultural exchange was hosted by two neighboring community-based nonprofits that have worked alongside each other for years to care for Heʻeia Fishpond (​Paepae o Heʻeia​), an 800-year-old ​loko i ʻ a (traditional Hawaiian fishpond) in Heʻeia, Oʻahu, and over 400 adjacent acres of agricultural wetlands (KākoʻoʻŌiwi​).

Kia ʻ i loko (fishpond guardians and caretakers) from approximately 60 loko iʻa (there were once an estimated 488) have gathered since 2004 as part of a network of fishpond practitioner groups called Hui Mālama Loko Iʻa. These gatherings have been facilitated and supported by local nonprofit, Kuaʻāina Ulu ʻAuamo (KUA), since 2014. According to KUA’s Loko Iʻa Coordinator, Brenda Asuncion, KUA connects and empowers rural and native Hawaiian communities around a common vision to care for Hawaiʻi together. Approximately 170 indigenous scientists and grassroots aquaculture practitioners from Hawaiʻi and across the Pacific gathered in Heʻeia, Oʻahu prior to the Aquaculture America conference to share and learn about traditional Hawaiian fishpond management. © Kehaulani Kupihea

“Indigenous people and local communities are increasingly taking a lead in caring for our planet and creating the abundance we need to sustain us,” said Asuncion. “We bolster our common vision by connecting to like-minded pathways, partners, and efforts around the world.”

This year, thanks in part to support from the Hawaiʻi and Washington Sea Grant Programs, nearly 10 tribes from British Columbia and America’s Pacific Northwest participated in the exchange, in addition to indigenous community members from Northern California, Pohnpei, and Aotearoa. In Heʻeia, participants were grounded in ​wahi pana (storied places) of the area. They visited freshwater springs and ​lo ʻ i kalo (agricultural system for growing taro) in the upland region of the ​ahupua ʻ a (traditional land division that runs from ridge to reef). They participated in collective work projects and travelled to fishpond sites across the island to learn about other types of loko iʻa and meet with their community caretakers.

“I know our cultures are different,” said Cynthia Ford from Northern California’s Tolowa Dee-ni’ tribe, “but the natural ecosystem [practices] are so similar.”

The group was also unified by one goal: to ignite a global resurgence of traditional, community-based food systems that incorporate the history, ecological knowledge, and culture of a given place.

Following the indigenous summit, the World Aquaculture Society’s ​Aquaculture America 2020 conference opened in Honolulu. An unofficial theme – ​how will we feed a growing global population? – was a focus of discussion​. Answers varied across marine species and technologies. Terms like “large scale” and “economic growth” contrasted with what was shared at the Heʻeia gathering. “There are so many lessons to be learned from loko iʻa and indigenous aquaculture practices,” said conference plenary speaker and Assistant Executive Director at Paepae o Heʻeia, Keli’i Kotubetey. “Our kupuna (ancestors) were experts in areas of climate mitigation, adaptation, resilience, resource management, and food sovereignty, so we are excited to share these solutions with the broader community.”

In aquaculture specifically, Asuncion says “we can help drive the ethic and practice in ways that uphold our indigenous values and respect the planet. By gathering together in these spaces, we have agency and can learn from each other to influence the context we work in. This is what our people did this week. It was historic.”

Featured image: Aerial photo of participants as they rebuild a portion of the wall at Pāhonu Fishpond in Waimānalo, Oʻahu during a work project organized by members of Waimānalo Limu Hui. © Ikaika Rogerson.