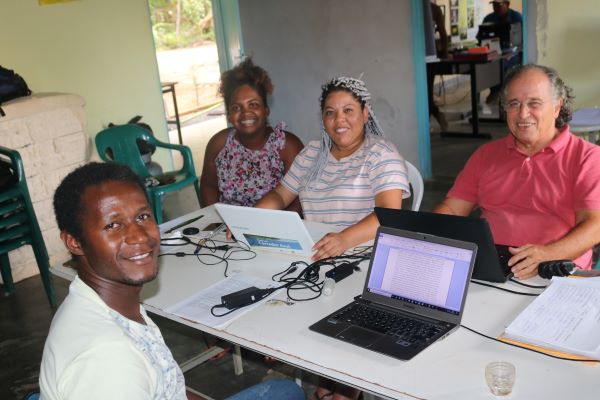 After an extensive participatory process, the community of Kalunga decided to register its territory of life in the UNEP WCMC global registry of ICCA–territories of life. Our Member MUPAN, who accompanied the Kalunga community, describes this process.

Kalunga, a community created as a refuge by free slaves

The Kalunga territory is a region with innumerable riches and great natural beauty. It was first occupied some 300 years ago, when many men and women were forced to live as slaves, working in mining. Not accepting this situation, they fled and began to live in hiding in parts of the hills located between the municipalities of Cavalcante, Monte Alegre de Goiás and Teresina de Goiás, to the north of the Chapada dos Veadeiros microregion, some 507 kilometres from the capital of the State of Goiânia. There, they developed their communities.

Finally, in 1982, an anthropological report certified that the entire area was occupied by people with the same ancestors. This allowed for the subsequent expansion, recognition and demarcation of the territory, which is part of the Kalunga Historical Site and Cultural Heritage—SHPCK. Today, approximately 1,600 families live in the area of 261,999 hectares, distributed in 39 communities.

The community evaluates advantages, challenges, and responsibilities associated with self-recognition as an ICCA

Recently, the board of the Kalunga Quilombo Association—AQK (highest authority)—understood the need to change the territorial and environmental planning system to strengthen governance throughout the entire territory. To this end, it organized 17 assemblies in the communities, during which the elected representatives met to establish standards of coexistence, also known as the Internal Regulations Statute.

During these meetings, various topics were discussed to improve the situation of the territory, including recognition as an ICCA—Indigenous and Community Conserved Area. The first presentation of mechanisms for self-recognition as an ICCA was at the second ICCA Brazil meeting, which took place on 19 to 21 August in the municipality of Corumbá-Mato Grosso do Sul. From then on, a series of internal reflections began in the communities of the Kalunga territory. The leaders debated the concept and evaluated the advantages, challenges, and responsibilities of the community in the conservation of their territory. They understood that official recognition as an ICCA can be an opportunity to achieve greater visibility for Kalunga communities’ conservation efforts, while maintaining their territory and relationship to their identity.

The consultation process for self-recognition took approximately one year and was supported by the ICCA Brazil Network and Mupan as the focal point. It culminated in an understanding of the central role of the Kalunga community in conservation.

“In the assemblies, we tried to show the community the importance of the work we have done for the world in relation to the preservation and conservation of nature. We, without even knowing it or being recognized, provide a global service to the environment. During discussions, we regained our awareness and pride in the way we live and the way we make a living from the environment. Often, we in the community do not recognize this. We tried to clarify these problems, and we saw that registration as an ICCA was a confirmation of our work and a way of showing ourselves to the world,” explains Damião Moreira.

An accompaniment from the beginning of the process

Damião, one of the leaders of the Kalunga Territory, approached Mupan—Women in Action in the Wetland, the focal point for the ICCA Network Brazil, to better understand the ICCA concept and the self-recognition mechanism. From that first step, a very fruitful relationship began. Damião participated in the “Second Meeting of ICCA Brazil” in August 2019, and was subsequently assisted in the internal consultation process. Mupan played an instrumental role in facilitating information and answering questions, as an accessible resource for following the steps and completing the registration and follow-up forms for the UNEP WCMC global registry of ICCA — territories of life.

“At the event (2nd ICCA Meeting), we were able to understand that only we and our actions, our way of life and our customs, make us an ICCA. Now we seek recognition, an international registration that unites us with other communities with similar traditions and who practice conservation like us,” celebrates Damião Moreira.

Kalunga was the first community to contact Mupan to request registration in Brazil. “I think that this visibility as the first territory to request registration as an ICCA in Brazil will strengthen the struggle of the Kalunga people and encourage other communities in the country to recognize themselves as such,” says Durval Motta, supporter of the Kalunga community for more than twenty years.

Mupan’s role is to support indigenous and traditional communities, facilitating understanding of ICCAs by translating materials and organizing meetings and talks to influence the debate, allowing more and more communities to have access to the concept and, if they feel identified as such, to also be able to request registration. To obtain more information, visit our page: Espaço TICCA Brasil.

“From the first contact with the Kalunga community, I realized how they are organized and became aware of their role and their importance in maintaining their culture, territory, livelihoods, and conservation of nature. After having been present and supported in this important moment of the decision to register, celebrated during an assembly with representatives from 27 communities, the strength of these people, who have been fighting for their rights for so long, is demonstrated, and they leave great examples for all of society,” says Lílian Ribeiro, Coordinator of Indigenous Affairs and Local Communities for Mupan.

Youth involved in community mapping of the territory

At the Kalunga historical and cultural heritage site, an important cartographic action for the whole territory is taking place, where young community members are learning to work on data collection and map making. Currently, they already have a solid database that allows for planning and better management of the territory (thanks to a project funded by the Critical Ecosystem Partnership Fund – CEPF). Today, this community is recognized as the largest remnant of Quilombola in Brazil, with historic heritage protected by the government of Goiás. Adorned by beautiful waterfalls, the community is working in sustainable tourism and receives lots of visitors, not only those interested in its natural beauty, but also those attracted by the historic, cultural, and religious values of the local traditional festivities that occur annually. For more information and/or to visit the community, visit their website: Asociación Quilombo Kalunga.

The link of Kalunga case study on the website of the UNEP WCMC global registry of ICCA-territories of life will be added here as soon as available.