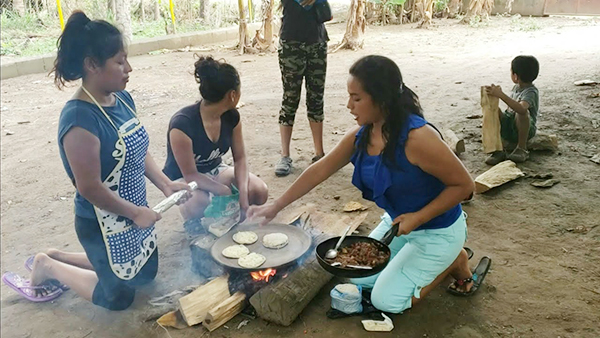 “The Sun, the Grandmother, the mountains, the forests, the animals, and the birds alert human beings of how to prevent, correct, and improve balance with the Sacred Mother Earth and the Universe. In the first months of this year Grandmother Moon, in the Sacred Ancestral Fire, in the dreams of the wise ones, announces serious problems against the life of Mother Earth and illnesses of human health. The call is to respect the life of Mother Earth, the mountains, forests, rivers, animals, birds, and the life of human beings,”
Felipe Gómez, Maya K’iche’

The Working Committee for the Defense of the Territories of Life of the ICCA Consortium and collaborators of the Working Group on Indigenous Peoples and Extractive Projects of CLACSO in Guatemala, write in our words about the coronavirus pandemic and its impact on the lives of Indigenous peoples.

In Guatemala, we coexist as Maya, Ladino-Mestizo, Xinka and Garifuna Peoples, with a population of more than 18 million inhabitants, the majority descendants of the Maya People. We share a millennial history, culture, identity, life systems and knowledge. Since invasion, colonization and privatization were systematically imposed on the country’s laws and institutions, millions of inhabitants have been living in poverty and extreme poverty, with a high degree of health vulnerability and high rates of malnutrition. The most affected populations are Indigenous peoples and peasants. The political, social and economic system is controlled by an elite, constituting a “captured State.” Meanwhile, corruption and nepotism have permeated practically all areas of public institutions. It is in this context that the Peoples have had to face the arrival of the COVID-19 pandemic.

During the first half of March 2020, the first positive case of coronavirus in the country was officially announced. The quarantine and the “stay at home” campaign was also announced, limiting Guatemalans’ travel from their communities, municipalities and departments.

Globally, the disease had already advanced, and in many countries dozens of deaths were reported daily, as well as the collapse of their health systems. A large percentage of human activity was paralyzed, allowing Mother Earth to rest, a respite from so much destruction and pollution caused by humans, but especially the large extractive industries and privatization of natural life.

Among the communities and institutions of the Peoples themselves emerged the concern that the panic campaign, the quarantine, and the state of disaster or curfew were a perverse effort on the part of the economic elite to take advantage of the crisis and benefit from the resources that the State had destined for education, health, electricity and other public services. In fact, a campaign has been launched to discredit the few institutions that have not been privatized, such as the Guatemalan Social Security Institute and public education.

The pandemic showed that public institutions and the health system are not prepared to deal with an emergency. Two months after announcing the first cases of the disease, the government has not presented or developed territorial strategies for the prevention, treatment, and eradication of the pandemic in indigenous communities; nor are there any specific actions to attend to the inhabitants of the most distant communities in the municipalities.

Migrants return from the U.S. without proper health measures in place

Most positive cases of COVID-19 have come from people who traveled outside the country or had contact with a person who did. Another important risk factor for the spread of the disease is associated with the displacement of migrant brothers and sisters, who have left their community to work in other countries to ensure an income for their families. In the context of the crisis, the United States also increased deportations of migrants, without guaranteeing health or hygiene measures, despite being the country with the most positive cases and deaths from the coronavirus.

Many of the cases in indigenous communities have been caused by returning migrants who, upon arrival in the country, have not found effective ways to determine whether they have been infected or not and thus avoid arriving in their community to infect their families. The flow of remittances to communities has also been reduced since the beginning of the pandemic, affecting the economic status of thousands of families in communities.

Measures to address the emergency have been implemented from the top down, by economic elites and the government, without considering the social and economic dynamics of communities. People could not go out to work, and the hours of farmers’ and popular markets were limited, while supermarkets and chain stores were allowed to continue to operate. Thousands of people could no longer sell at the markets or in their small businesses. Those who maintained some form of employment, which guaranteed them food every day, have lost their jobs, especially those who could no longer travel from their communities to their workplaces or to sell their products.

Although the government ensured that the food industry and other key sectors of the economy continued to function, the household economy was the first to be affected. People could not generate income to guarantee their access to food and within a week of the measures being put in place, there were already food shortages, especially in impoverished urban areas and some rural communities.

Two months into the pandemic, it is common to see people with white flags on the roadside or in the city, asking for food support to cope with the crisis they are experiencing. It is feared that in the coming months the situation of acute and chronic malnutrition will increase, especially in more impoverished communities and those within the so-called “Dry Corridor,” which are mostly indigenous communities. The beginning of the rains at the end of April and beginning of May could also present a greater risk to the population with the outbreak of diseases associated with the season.

For their part, large companies did continue to work in the territories. Mining extraction projects, construction of hydroelectric plants or installation of high-voltage electricity pylons, monoculture plantations of oil palm or sugar cane, as well as work on the Interoceanic Corridor, continued to operate and even increased their activities during the quarantine. Various communities have reported that companies have continued their activities, even during curfew hours. Many of these companies have expired permits or there are legal actions favoring indigenous communities and prohibiting any activity in their territories.

Threats to defenders of territories of life are growing

With restrictions on mobility and travel imposed by the government, it has been more difficult to continue actions in defence of territories of life and their defenders. At the same time, acts of intimidation, threats, and coercion have increased against leaders and indigenous and community authorities, as well as against various peasant organizations, social activists and even journalists.

Access to information about the pandemic has been limited by the government. President Alejandro Giannettie has begun to hold national news briefings but has not held press conferences to address more specific questions from journalists. Access to sources of information has been restricted, and corporate media have been privileged; meanwhile, journalists who have made these actions public or who have revealed corruption in emergency acquisitions have been intimidated or threatened. For their part, community radio stations and other digital media have continued to report on the situation in the communities, allowing the public to learn how people are organizing themselves to face the crisis and providing information about local cases that the government does not report.

Increasing violence against women and children

Women have suffered differently from the pandemic. Violence against women and rape have also seen an upsurge during the pandemic, with many women having to live with their abusers either at home or in their own communities due to confinement measures. Women are also under greater pressure from increased work in the home, care for vulnerable people (children and the elderly), and demands to guarantee daily food in the family. Many children are also sexually abused or experience domestic violence, which goes unreported.

The government has prioritized support for the macro economy, allocating financial resources to large companies. International bank loans and bond placements were authorized so that the government would have resources to address the pandemic, but there are reports of low execution of those funds because officials are seeking to arrange purchases to benefit specific companies.

Ten programs were created to support the population, workers, or to support small and medium enterprises. But until now, the mechanisms to make these supports effective have not been defined. One of the programs established is the Bono Familia, which will provide economic assistance to families. However, in order to create a database of beneficiaries, the criterion used was those with electric bills, and the measure was criticized for privileging the use of a business database to determine who could or could not access the benefit. Thus, many of the poorest people in the country would be left out of this aid, as they do not have electricity service. Most of them are communities and Indigenous peoples.

As Maya people, we note that privileging the business sector with government programs is another manifestation of the level of racism and discrimination that the Guatemalan State maintains towards Indigenous peoples and communities; it is a symptom of the State’s complicity in the plundering and dispossession that such projects entail.

The hope of communities and Peoples: solidarity, spirituality and community organization

Despite the health and economic crises in the communities, solidarity initiatives and new forms of support have also been strengthened, such as the collection of food to help families or communities in quarantine, collective self-control to prevent the pandemic from infecting members of the communities, as well as the role of community authorities who have been able to implement specific measures to care for the life and health of people.

Maya spirituality remains present and alive in the communities. During the quarantine, male and female spiritual guides have gone to the altars, ceremonial centers, and sacred places to offer ceremonial materials, prayers of gratitude, and requests for personal, family, and collective health. Asking that there be no lack of food and that the roots, plants, fruits and natural herbs heal and protect the immune system of the inhabitants. In this context, Grandmother Moon communicates that in New Moon and Full Moon the health of newborns, old men and women must be taken care of.

The pandemic has also led to reflection on the urgent need to strengthen local organization; to manage information independently; to return to traditional measures to preserve collective health, as well as to produce a diversity of healthy foods and care for native seeds.

In the two months that the pandemic has affected the country, in communities and urban areas awareness has increased regarding caring for the land, seeds, planting and food diversification as key elements of survival. There is greater awareness that roots, plants, fruits and various types of herbs are our food and medicine for good health.

There are more people reflecting on the fact that our existence in the communities and as inhabitants of cities depends on the care and defence of the territories, the land, the mountains, the forests and the rivers. That human beings must return to their true origin, that without Mother Earth and all her elements, human beings have no future to continue living. That the selfish, privatizing, mercantile, destructive and hoarding economic model is an evil that we must eradicate for the sake of the life of future generations.

Featured image: © CLACSO.
Translation from Spanish: Chris Jarett.
*This article was also published in Spanish on the website of the Latin American Social Science Council—CLACSO.