On 1 June 2020, the Gobierno Territorial Autonomo de la Nación Wampis (GTANW) announced that it had taken legal actions against the oil company GeoPark Peru SAC for putting Indigenous peoples at risk of COVID-19 contagion through its activities in the northern Peruvian Amazon. The GTANW, which represents 85 Wampis communities along the Kanus (Santiago) and Kankaim (Morona) rivers, is a Member of the ICCA Consortium.

The ICCA Consortium is issuing this alert about the imminent threat of human rights and environmental violations by GeoPark, including contagion of the COVID-19 virus in Wampis communities. The Wampis Nation have cared for, sustained and defended their 1.3 million-hectare territory in the Amazon rainforest since time immemorial. It is no coincidence that the vast majority of our planet’s remaining biodiversity is in the territories of Indigenous peoples such as the Wampis Nation. They embody the worldviews, values and ways of life that can and should guide the rest of humanity on a more respectful, peaceful and sustainable path for future generations. At this time of interconnected crises of climate and ecological breakdown and a global pandemic, we need to be helping Mother Earth heal, not exploiting her further.

In 2014, the Peruvian government granted the company GeoPark, which has operations in several Latin American countries, the concession of oil lot 64. This 761,501-hectare lot overlaps with and would directly affect a significant part of both the Achuar and Wampis territories. The lot 64 oil extraction project involves not only extracting the crude oil but also transporting it by pipeline and boats through Wampis territory on the Morona river. Any oil spill would contaminate the lifeline of over 20 Wampis communities along the river. The GTANW has consistently opposed the project in its entirety from the beginning. GeoPark has no approved Environmental Impact Assessment and no permit to exploit resources. Despite this, the company has set up its operation base within a garrison of the Peruvian army on the Morona river, which is also in Wampis territory. Militarised industrial operations are also known to pose greater threats to women and girls, particularly through sexual violence. GeoPark’s illegal presence can only be assumed to be an attempt to intimidate, sow fear and social divisions and undermine the self-determined resistance by the Wampis and Achuar. It will not succeed. 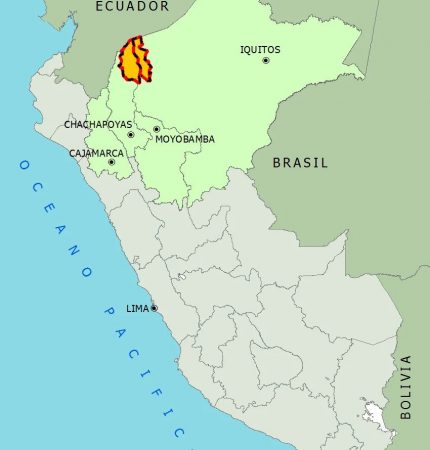 READ MORE: “Lot 64, a world of conflicts” by Peru Equidad (in Spanish only)

Against this backdrop, Wampis communities along the Morona river in particular face a heightened threat of contagion by COVID-19 due to GeoPark’s illegal presence and activities. In clear violation of the decrees issued by the Peruvian Government, which prohibit all non-essential economic activity and movements, company workers stayed in Wampis territory during the Emergency State. In addition, company boats carrying personnel and food items have been moving back and forth between the company’s operation base and San Lorenzo, a small town that has reported over 100 COVID-19 cases. Indigenous peoples in remote areas are especially vulnerable to COVID-19 infection given limited or no access to emergency health care such as respirators. In addition, there are particular concerns about Indigenous elders and knowledge holders contracting and succumbing to COVID-19, since it affects older people most severely. With the complaint to the criminal prosecutor’s office against GeoPark’s illegal presence in Wampis territory, the GTANW expects the Peruvian government to enforce quarantine regulations and safeguard Indigenous peoples’ rights to health by preventing GeoPark from spreading the virus. The GTANW demands that GeoPark halt all activities and leave Wampis territory immediately and permanently. The threat to the Wampis Nation’s territory of life is not only present during the pandemic but as a result of the entire project.

The ICCA Consortium fully supports the GTANW’s demands. We call on:

Take action in support of the Wampis and Achuar and learn more at: https://nacionwampis.com/atsa-geoparkka. The Morona river is the lifeline for over 20 Wampis communities © Thomas Niederberger.