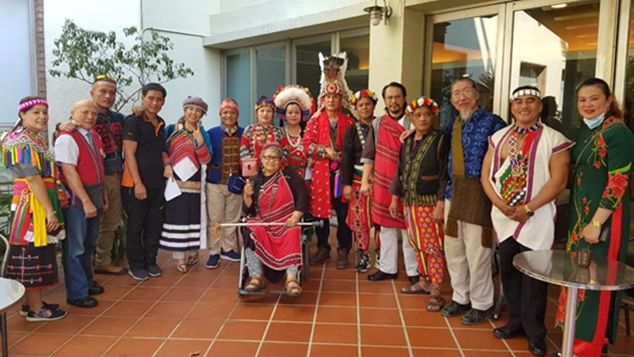 As part of the plan for an Indigenous Peoples’ Confederate Autonomous Government in Taiwan, leaders recently have set-up an institutional process for self-determination, issued a letter to the Taiwanese president, and circulated a public statement.

Indigenous peoples in Taiwan are going ahead with the plan for a united autonomous government. We are hopeful that self-governance will lead to decolonisation and help Taiwan for inclusive nation-building.

In August 2020, Indigenous Taiwan Self-Determination Alliance (ITW-SDA) has organised several activities and meetings and successfully set up an institutional process for self-determination. The Indigenous peoples’ coalition made a public statement earlier this month and an invited delegation handed it over to the Taiwanese president’s office on 14 September.

This has come after years of dialogue and deliberations.

On the morning of the 1st of August, on the Indigenous Peoples’ Day of Taiwan, ITW-SDA organised a gathering of tribal activists in front of the Presidential Office Building in Taipei. They issued a letter to President Tsai Ing-wen from the Press Conference as part of the gathering. The letter emphasised the Indigenous peoples’ liberation from the colonial relationship and inclusive nation-building in Taiwan.

Later that day, tribal representatives met in an Action Forum to further discuss the organisational strategies of ITW-SDA. They thoroughly discussed the vision and plans for an Indigenous Peoples’ Confederate Autonomous Government in Taiwan. Following the discussions, the representatives set up an institutional process for self-determination, with two institutional bodies: The Preparatory Committee for the United Assembly of Indigenous Peoples’ Confederacy Councils and an Allied Front of Tribal Communities for Sustainable Self-Determination.

Then, on 21 August, we received an invitation from the Presidential Office to meet with President Tsai on the afternoon of 14 September. Then we issued a public statement on our vision and plan for decolonization, self-determination, and nation-building in Taiwan. The following is the English version of our statement.

‘Decolonisation of Indigenous peoples, sustainable self-determination and inclusive new nation-building for Taiwan together’

For thousands of years, Taiwan has been the ancestral homeland of the Austronesian peoples and their migration into the Indian Ocean and the Pacific. The life of Indigenous peoples here are deeply connected and embedded with the land, sea, nature, tradition, and spiritual realm. This connectedness and embeddedness gave birth to our meaning and value system; what we interdepend on and use sustainably, what we love and cherish, what we respect and revere.

We have our unique knowledge system of the tribal communities, interspecies habitats, land-sea ethics, and of sacred taboo norms. By learning and growing from it, we get the energy for action, the wisdom of resilience, and the willpower to persist. Only through adaptation and innovation across generations, our indigenous traditions have been inherited for millennia.

Thinking thoroughly about the new orientation for the governance of an equitable and sustainable Taiwan, we launched the vision for ‘Indigenous peoples’ liberation from the colonial relationship and inclusive nation-building in Taiwan.’ This vision makes use of the indigenous culture and ecological knowledge of our peoples to heal the trauma of colonisation and exploitation that have caused pervasive insanity, malfunction, and anomaly besides corruption and destruction on the Earth. Let us conserve the animistic territories of life for all beings, adhere to the ultimate value of the trinity of language, cultural and biological diversity. Let us implement a new model for the governance of the planet, together.

From the ‘Free China’ propaganda during the Chiang Kai-shek dictatorship era, under martial law for 38 years, to the ‘Democratic Taiwan’ after Lee Teng-hui, the first President of Taiwan by a general election; the oppression of colonial rule on the Indigenous peoples have never been lifted. At the time when the National Human Rights Commission was recently established, the Indigenous Taiwan Self-Determination Alliance (ITW-SDA) requested the colonial government to implement the Article 1 that is common to the International Covenant on Civil and Political Rights and the International Covenant on Economic, Social, and Cultural Rights:

‘1. All peoples have the right of self-determination. By virtue of that right they freely determine their political status and freely pursue their economic, social, and cultural development. 2. All peoples may, for their own ends, freely dispose of their natural wealth and resources without prejudice to any obligations arising out of international economic co-operation, based upon the principle of mutual benefit, and international law. In no case may a people be deprived of its own means of subsistence. 3. The States Parties to the present Covenant, including those having responsibility for the administration of Non-Self-Governing and Trust Territories, shall promote the realisation of the right of self-determination, and shall respect that right, in conformity with the provisions of the Charter of the United Nations.’

Under the ‘Act to Implement the International Covenant on Civil and Political Rights and the International Covenant on Economic, Social and Cultural Rights’ announced April 2009, the government should deal proactively with the four conditions of liberating from the colonial relationship on ‘recovering indigenous sovereignty, returning traditional territories, compensating for destructions, and offering the necessary assistance to restore the disturbed tribal communities’ at the highest scale and scope. The government should work together with Indigenous peoples to build consensus, and to initiate the vision of reconciliation, restoration, and to pursue inclusive nation-building.

The United Nations General Assembly has approved in 2010 the designation of 2011-2020 as the third International Decade for the Eradication of Colonialism. And 2020 marks the last year of this decade.

The oppressive relationship between the colonisers and the colonised in Taiwan has critically distorted humanity on this land and hindering us from seeking a common vision and just future for Taiwan. Liberating the Indigenous peoples from the colonial ruling is the only way for the country to be released from this common suffering. And this liberation is possible through restoring sovereignty, returning the territory, compensating for destruction, and collaboration for restoration.

Therefore, on the ground of recognising the natural sovereignty of the Indigenous peoples, we would invite you to commit jointly to end the internal and external oppression left as the aftermath from the Second World War and the Civil War between the KMT (Nationalist China) and the CPC (Communist China). The Indigenous peoples will collaborate with the old and new Chinese immigrants and the latest residents from Southeast Asia to rebuild an identity for Taiwan and to restore the common homeland. This is because we want all people to be engaged in the process of self-determination. We want to establish a new and independent natural sovereign state in Taiwan to be recognised by the international community.

Finally, in 2016, President Tsai Ing-wen issued a formal apology to the Indigenous peoples on behalf of all the colonial governments in Taiwan and announced the establishment of a ‘Historical Justice and Transitional Justice Committee for Indigenous peoples’ under the Presidential Office. Those initiatives have won much endorsement and evoked many expectations or imaginations. But for the Indigenous peoples, the fundamental step towards liberation from the colonial relationship and initiating inclusive new nation-building together has always been held back till now.

Starting from 2018, ITW-SDA partners have strived to integrate with insightful and visionary tribal activists in the traditional territories of Indigenous peoples. We have established joint declarations of territories and mutual recognition of sovereignty, promoted the arrangement of ethnic and regional confederacy treaty organisations, created an Allied Front of Tribal Communities for Sustainable Self-Determination, founded Indigenous peoples’ Autonomous Councils in the six metropolitan areas as well as the Liaison Office for Advancing Nation-to-Nation Relationships in Taiwan.

We further propose to organise the formation of a United Assembly of Indigenous Peoples’ Confederacy Councils. We also propose to plan for an Indigenous Peoples’ Confederate Autonomous Government to develop ethnic political entities and develop tribal community governance institutions. This will be our structural basis and strength to prepare for ‘Indigenous peoples’ liberation from the colonial relationship and inclusive nation-building in Taiwan.’

We call on the colonial government authorities to respect the natural sovereignty of the Indigenous peoples. We call on the government to establish a corresponding agency of the nation-to-nation relationship with Indigenous peoples. This independent agency will conduct mutual negotiations on decolonisation and self-determination of Indigenous peoples. We will continue to advance the practice and growth of the four organisational strategies of ITW-SDA. For inclusive nation-building, we will continue to seek all opportunities for communicating cross-national consensus and integration. We envision a sustainable and equitable Taiwan, that is why we are striving for a power transition and paradigm shift in governance.

Let us struggle together and mutually support the decolonisation and self-determination process. Let us work together for inclusive nation-building in Taiwan.

The ITW-SDA Delegation to visit the Presidential Office also held a press conference. At the press conference, we made statements to the public about how we are preparing for communicating among trans-ethnic groups and inclusive national integration. But could not meet the President Tsai that day. On the president’s behalf, her staff accepted the letter and we read out it to them. We have also requested an open written reply from the President. We requested the President to address our legitimate appeal based on the rights of Indigenous peoples to decolonisation, sustainable self-determination, and natural sovereignty.

We are further expecting exchanges among ICCA Consortium Members, and with our partners and friends around the world on the following critical subjects and common experiences: