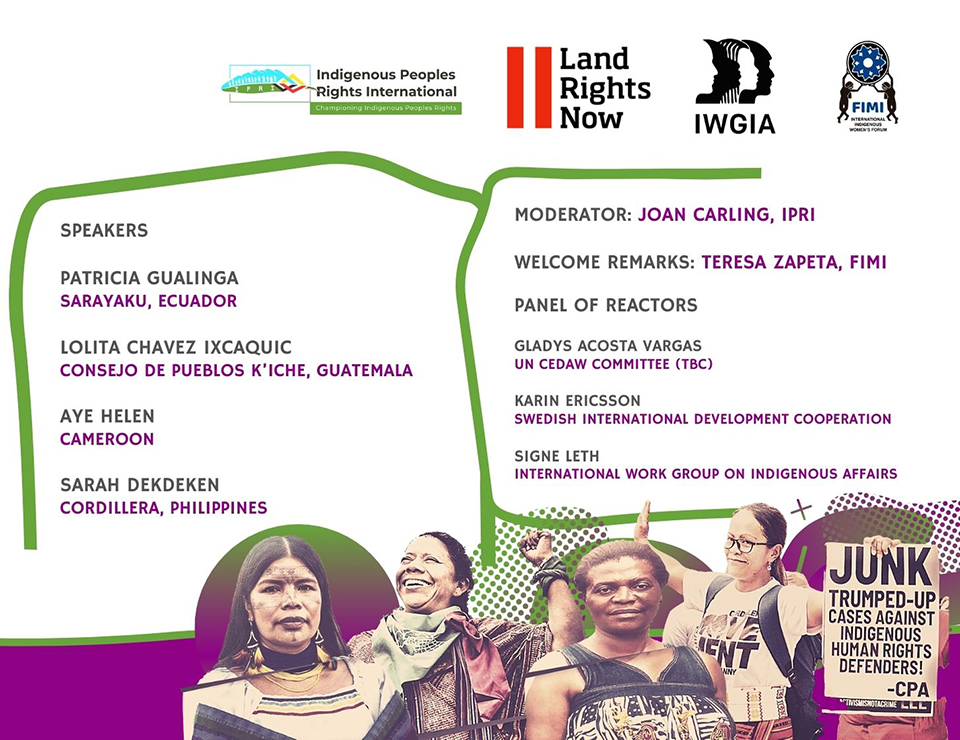 In commemoration of the International Women’s Day on March 8, the Indigenous Peoples Rights International (IPRI), together with Foro Internacional de Mujeres Indígenas (FIMI), International Work Group for Indigenous Affairs (IWGIA), and Land Rights Now organized the webinar, “Women at the Frontline: Indigenous Women at risk for defending their lands, rights and dignity” on March 11, 2021

About 500 participants registered to this online event that featured four courageous Indigenous women from the Philippines, Cameroon, Ecuador, and Guatemala to share their stories of resilience and resistance in leading the fight for land rights and self-determination in their respective communities.

Sarah “Bestang” Dekdeken, a Kankanaey-Igorot from Cordillera, Philippines, detailed how the government through the combined forces of Philippine police and military have been attacking her organization, the Cordillera People’s Alliance (CPA), and its leaders for defending Indigenous peoples’ lands, territories, and resources in the region.

Sarah shared that the Philippine police attacks CPA through criminalizing its leaders. Fabricated charges were filed against CPA leaders like Sarah, who sits as the secretary general, and Windel Bolinget, CPA chairperson. Currently, Sarah faces a trumped-up case of cyber libel filed by the Cordillera police chief for speaking out against the police’s desecration of a Cordillera heroes’ monument based on the report of the community, while Windel is currently facing charges for an alleged murder that happened in Davao del Norte (Southern Philippines), a place which he never visited during his lifetime.

Sarah left the webinar immediately after her brief presentation, after she learned that a warrant of arrest against has already been issued and may be served to her any moment. Aye Helen, a Baka Indigenous person from Cameroon, shared the difficulties that she and other Indigenous and human rights defenders are facing as they defend their lands from logging companies.

Aye explained that Indigenous peoples, particularly Indigenous women, have been forced to settle on the sides of the roads since 1960s. What makes it more difficult for them to access their lands, Aye said, was the lack of policies that regulate their settlement and protect their lands from reserves, parks, and logging companies. Patricia Gualinga, an Indigenous woman leader from the Kichwa community of Sarayaku, in the Ecuador Amazon region, revealed that while Sarayaku’s victory against a foreign oil company that was allowed to encroach on their ancestral lands for decades was recognized globally, the Ecuadorian government has not done much to implement the sentence.

Patricia noted that the Sarayaku territory has been divided into smaller territories. Worse, she shared, there are now ten oil companies in different spaces that they must defend their lands from. Despite the worsening challenges in their territory, Patricia assured that the Sarayaku people, led by Indigenous women, are determined to continue to fight against all forms of oil exploitation and logging in their territories. Lolita Chavez Ixcaquic, a Maya K’iché community leader from Guatemala, shared the difficulties she experienced as an Indigenous people’s rights defender in exile since 2017. She emphasized that amid the challenges she is confronted with, she does not consider herself as a victim but as a defender who fights with dignity and continues to promote the rights of Indigenous peoples even from a distance.

Lolita said that the Guatemalan government has criminalized her and tagged her a terrorist who threatens national security. The challenge, she pointed out, was to contradict all the false accusations thrown at her by the Guatemalan government and companies. She also noted that the COVID-19 pandemic also exacerbated the challenges that she faces as a criminalized Indigenous people’s rights defender in exile.

Apart from the four Indigenous women, representatives from UN Convention on the Elimination of All Forms of Discrimination Against Women (CEDAW) Committee, Swedish International Development Cooperation Agency (SIDA), and IWGIA were also invited to provide brief responses. UN CEDAW Committee Chairperson Gladys Acosta Vargas observed stark similarities on the experiences of the four Indigenous women who presented. She said that the situation of indigenous women was severe, and that they are all confronted with institutionalized violence – one that does not only affect Indigenous and human rights defenders as individuals, but also the communities they belong to.

Gladys also mentioned that Indigenous women need to be recognized not only as members of Indigenous communities, but more so as leaders who perform important tasks for the future. SIDA Policy Advisor and Programme Specialist for Gender Equality Karin Ericsson shared the forms of support that SIDA provides to address and to contribute to combatting and preventing threats and violence that Indigenous women encounter in their roles as human rights and environment defenders. She said that SIDA partners with organizations that provide both emergency grants and advocacy support to human rights and environment defenders.

Karin also acknowledged that women and Indigenous women organizations are globally underfunded, despite the increasing threats and violence they face. Thus, SIDA puts value in supporting and building long-term relationships to address the root causes of violence. IWGIA Senior Advisor Signe Leth reiterated that IWGIA has always been providing help in whatever way that they can to Indigenous peoples, including Indigenous women. She also assured that Indigenous peoples always have an international ally in IWGIA. There were several comments and questions from participants including what others can do to support Indigenous women land rights defenders and their communities. IPRI director and webinar moderator Joan Carling reiterated the call of the speakers to build stronger solidarity with Indigenous women and communities, strengthen alliances and networks of Indigenous women and provide all forms of support to them and their works so they don’t feel alone in their struggles. Joan said that IPRI remains committed in forging more collaboration in working with and supporting Indigenous women in the frontline and will thereby continue communicating with the participants to the webinar.