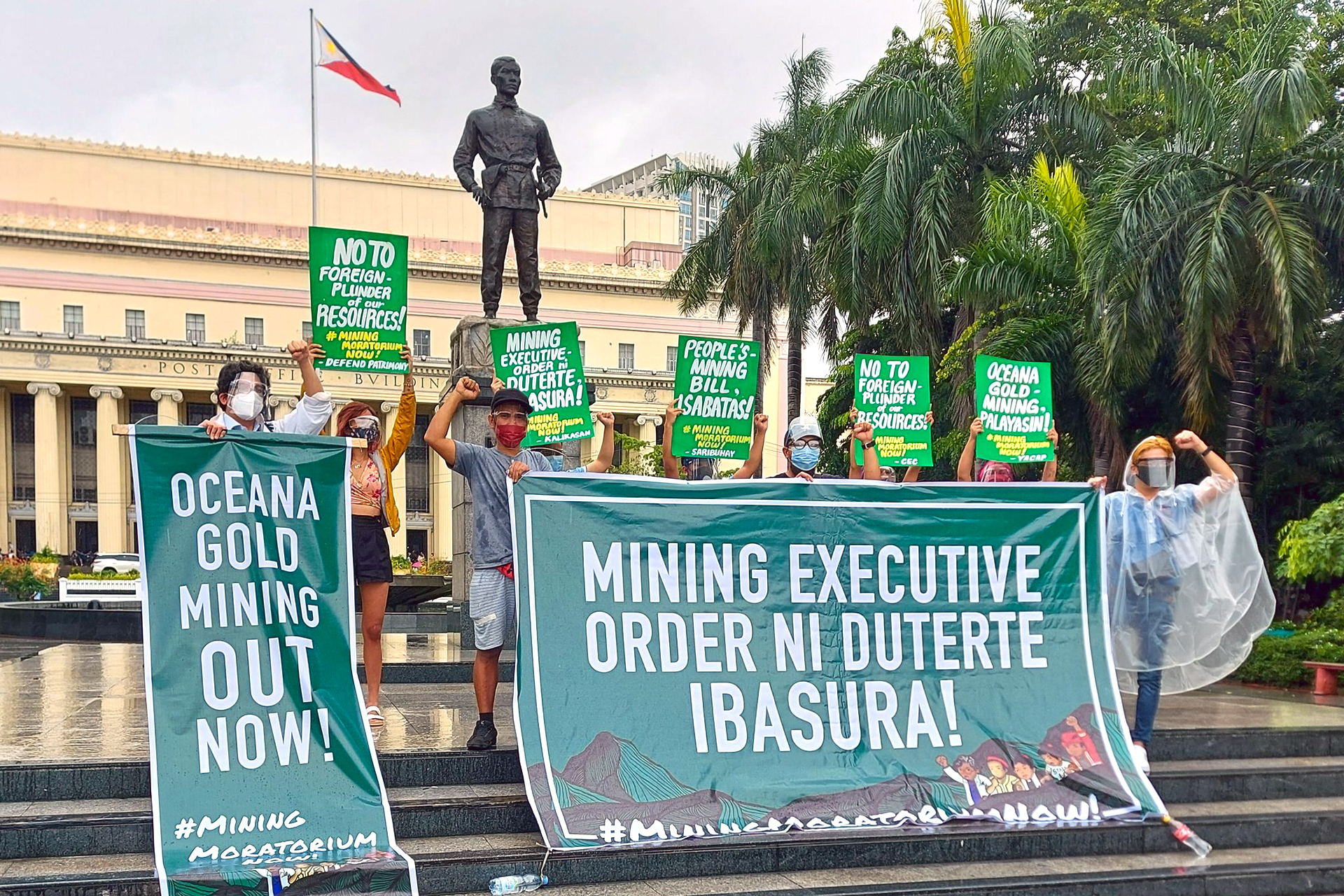 By Hannibal Rhoades*
Yes to Life, No to Mining and The Gaia Foundation (ICCA Consortium Member)

On the 22nd of July, communities, activist networks, and allied organizations united to mark the annual Global Day Against Mega Mining and show solidarity with communities and Indigenous Peoples defending territories of life from this destructive industry. This year, due to ongoing COVID crises, most actions took place online, with the focus of the day a global online ‘banner drop’ in solidarity with frontline communities in the Philippines.

The Philippines has long been a mining hotspot where people who stand up to defend their livelihoods and territories face horrific violence. According to Global Witness, it is one of the most deadly places to be an Earth Defender.

This dire situation may be about to get much worse. This year, Philippine President Rodrigo Duterte announced plans to fast-track over 100 new mining and large infrastructure projects across the archipelago. Duterte has also renewed Australian mining company OceanaGold’s controversial Didipio Gold Mine, where the Ifugao Indigenous People have maintained an anti-mining barricade for years, despite suffering severe state violence and repression. This represents a dramatic change of direction from a draconian leader who came to power on an anti-mining platform and banned open-pit mining in 2017. 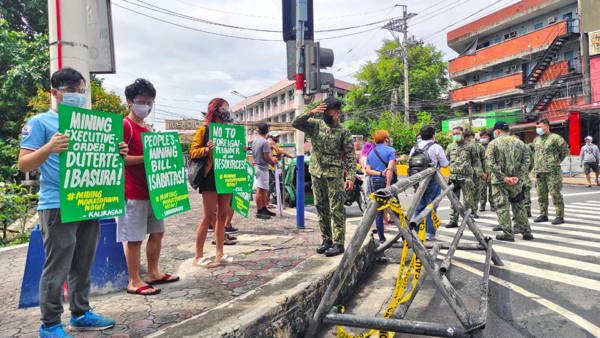 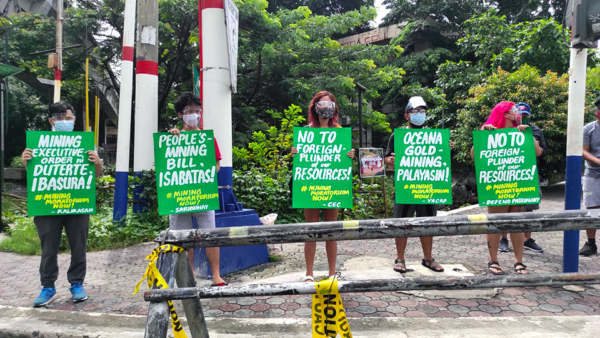 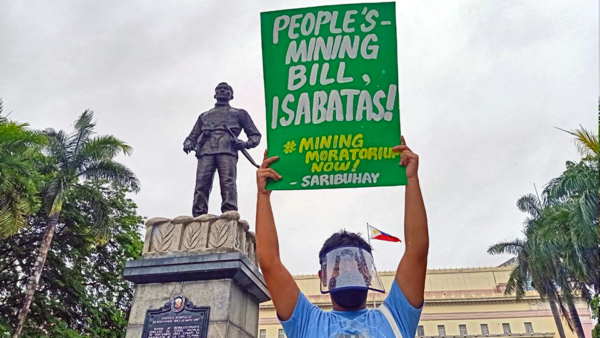 In response, Filipinx Indigenous Peoples’ organizations, community platforms, and allies in civil society linked arms last week to call for a #MiningMoratoriumNow, backed by a chorus of global allies.

Banner-drop actions also took place in several other communities on the frontlines of extraction and in the heart of areas where decisions about mining are made. In Northern Ireland’s Sperrin Mountains, an Area of Outstanding Natural Beauty, activists dropped a banner at the Greencastle People’s office. Set up to resist the imposition of Dalradian Resources’ Curraginhalt gold project, local people have maintained this camp for more than three years. To date, they have succeeded in preventing the project from going ahead.

In Brussels, members of Friends of the Earth Europe and the European Environment Bureau showed their solidarity. Both organizations are advocating for systemic solutions to overconsumption in Europe that will if implemented, drastically reduce demand for minerals and metals mined by destructive means all around the planet. Activists from Greencastle with their banner at the Greencastle People’s Office. Photo: Save Our Sperrins

Many others, hailing from the USA to Colombia, made their online banners or used those provided by the Yes to Life, No to Mining global solidarity network to send messages of support.

Around our living planet, the threat mining poses to territories of life is increasing, or set to increase, significantly in coming years.

Governments and mining companies are looking to capitalize on a new boom in the price of metals required for transitions to renewable energy, digitalization of industry, and military technologies. All of these technologies, and most importantly the projected growth in demand for them, require vast amounts of minerals and metals.

In a business-as-usual scenario where economic growth remains societies’ central aim, most of these minerals and metals will be obtained by mining our living planet. This is bad news for global efforts to chart a course away from the worst-case scenario of climate and ecological breakdown. 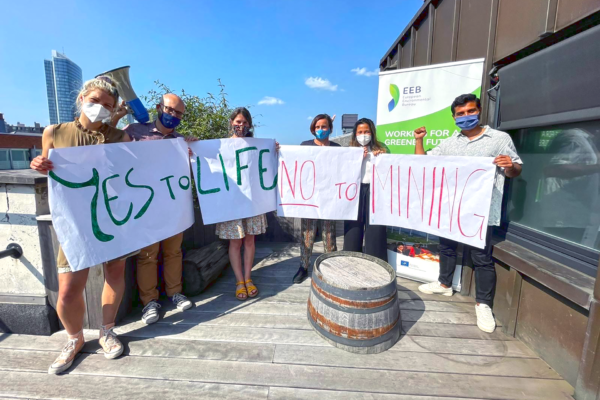 Banner drops by the Friends of the Earth Europe and European Environment Bureau teams in Brussels, home of the European Parliament and Commission. Photo: FoEE and EEB 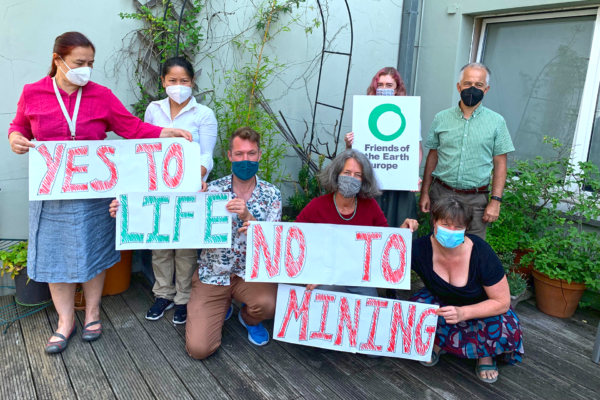 Banner drops by the Friends of the Earth Europe and European Environment Bureau teams in Brussels, home of the European Parliament and Commission. Photo: FoEE and EEB

The extraction and processing of mined materials are responsible for 26% of global emissions and destroys ecosystems that play a vital role in regulating our shared climate. A recent analysis published in Nature Communications Journal shows that, in such a scenario, the ecological impacts caused by mining expansion could be so drastic that it “may surpass those averted by climate change mitigation.”

As in the Philippines, the communities who live above or near these mineral and metal deposits face violence, displacement, and killings perpetrated to facilitate mining in the name of a ‘green’ transition. This is even though many of these communities live in low-impact, sustainable ways, are the most effective custodians of climate-critical ecosystems, and bear little to no responsibility for climate change. As one analyst mildly puts it:“an industrial future based on fossil fuels is impossible, while the future envisioned by a transition to renewable energy is also flawed.” As well as being an opportunity to show solidarity in the here-and-now, this year’s Global Day Against Mega Mining was seized as an opportunity to highlight the fact that we cannot mine our way out of the climate crisis.

We need a post-extractive transition, rooted in a move away from economic growth and reduced, redistributed, globally just consumption of both minerals and energy within circular societies. Such a transition would necessarily recognize the vital role of communities and peoples who have deep cultural and spiritual connections to the territories of life they are protecting and the foundational importance of these sacred lands and waterscapes now and for future generations of all species.

Hannibal Rhoades is the Northern European Coordinator of the global Yes to Life, No to Mining solidarity network, a member of the London Mining Network’s Advisory Committee, and Beyond Extractivism program lead at The Gaia Foundation. He is based in the UK.