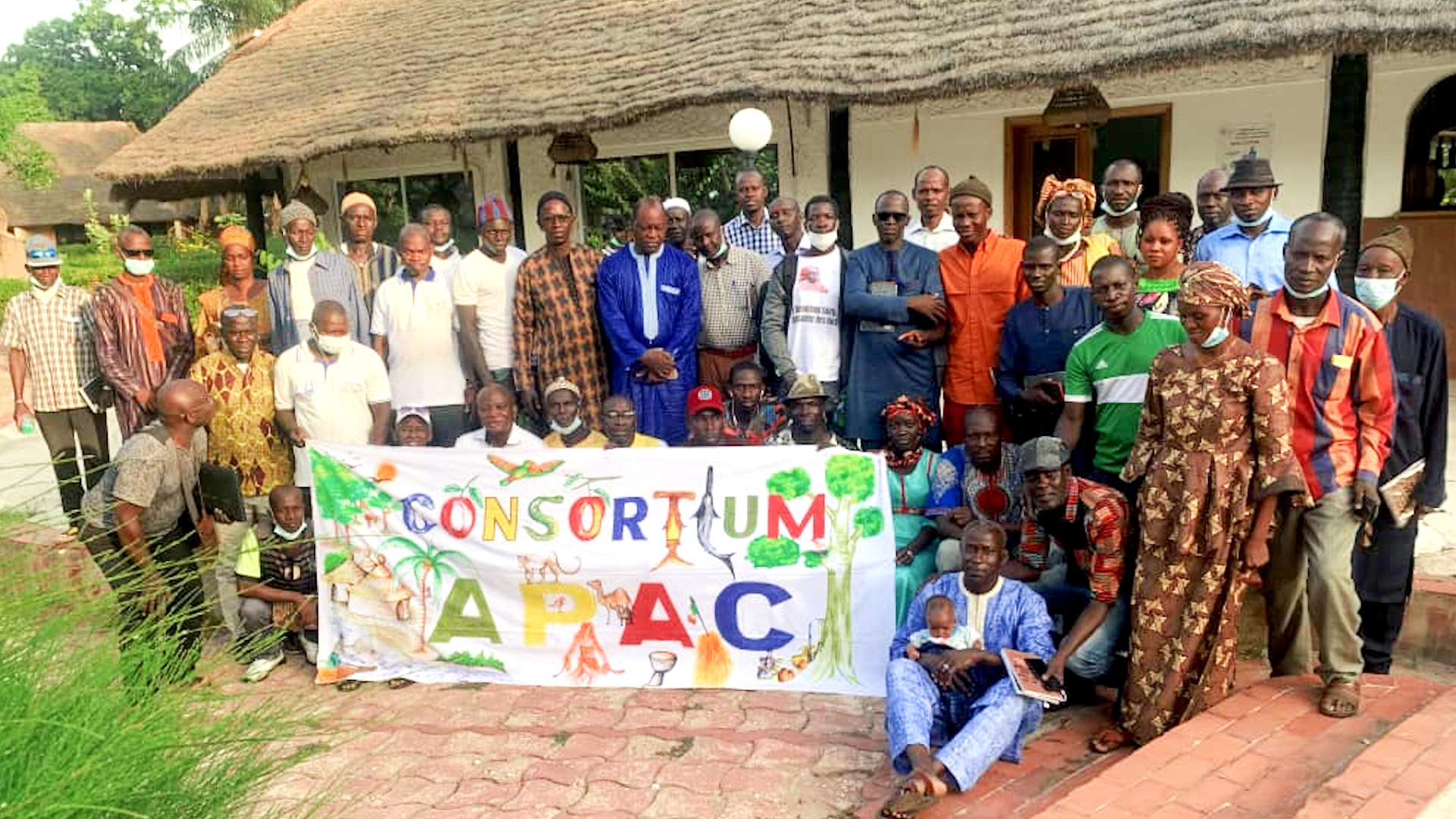 Two years after its creation, ANAPAC SENEGAL has brought together ICCA stakeholders of Senegal and some countries of the West African sub-region to discuss what has been done to date and define new directions

Kawawana, the first ICCA in Senegal to have been declared a territory of life, is a community of 12,000 people living in the Casamance estuary.  Recognized as a legal entity in 2010, Kawawana has served as an example for many other communities in the country, that have followed in its footsteps. Today, ten riverside or coastal ICCAs and sixteen land-based ICCAs are seeking recognition by the Senegalese government for their capacity to govern and manage the natural resources surrounding them.

Community governance of natural spaces has given proof worldwide of its efficiency with remarkable results for biodiversity, socio-economic life, and climate change resilience. What remains is for it to be disseminated and popularized, including in the interior regions the country.

The National Association of ICCAs of Senegal was created in November 2019. The challenge is to establish this network as a mechanism for coordinating, supporting, and defending the communities’ rights to self-determination. The model seeks to harmonize and improve the modes of natural resource governance and management in Senegal and thus significantly contribute to the design of public policies for the environment and natural resources.

This is the context in which the first national assembly of Senegal’s ICCAs was organized in Ziguinchor from 28 June to 1 July 2021, over a period of 3.5 days.

ICCA actors from Senegal and other West African countries just came together at the first national assembly of ICCAs of Senegal, two years after the creation of ANAPAC SENEGAL, to discuss what has been done to date and to define new directions.

As the capital city of the region that is home to the emblematic and internationally known ICCA Kawawana, Ziguinchor was chosen as the site for the national assembly.  The first ICCA to be legally recognized in West Africa, Kawawana has elicited such interest that it has become an example for many other ICCA communities. This river-based community fishery enjoys high-quality governance and significant natural resources, including fish, oysters, mangroves, and inspiring cultural values. It is well known for the following:

Participants from many regions in Senegal and other African countries

More than fifty people attended the meeting. They included representatives from Senegalese ICCAs, the leaders of KABEKA association, the presidents of the ICCA networks in Guinea and Burkina Faso, a representative from Guinea-Bissau, and a team from the NGO Natural Justice. All twenty-seven members of the national assembly of ICCAs Senegal were represented. The presence of women, along with both younger and older adults, made for an inclusive assembly of all social groups comprising the ICCA custodian communities.

In addition to the opening and closing ceremonies presided by the heads of ICCA national assembly of Senegal and the ICCAs support association KABEKA, this first general meeting of the ICCAs of Senegal was structured into three major parts.

Various members of ANAPAC Senegal were introduced and gave presentations enabling participants to familiarize themselves with each other’s work. The objective was to measure how the zonal consortiums of ICCAs were operating. Few accomplishments were reported, and the consortiums pointed to the many difficulties created by the lack of legal recognition beyond the communal level and the limited financial resources raised to strengthen their grassroots organizations.

Participants from other countries gave presentations on their experiences and described how ICCAs are performing in their countries. In addition, each ANAPAC member presented their accomplishments, challenges, and plans. The working groups also reported on their efforts. The NGO Natural Justice gave a presentation on the legal framework of ICCAs in Senegal and the various possible forms of legal recognition. After noting the existence of local legal recognition, they described the legal loopholes that have been used to circumvent them, based on the law on decentralization.

This was the opportune moment for participants to learn from Kawawana’s experience to grapple with their own challenges.

What came out of the assembly

Considering the situation of the ANAPAC and future strategic directions to be taken, the following major directions were decided upon:

We, the ICCAs (Indigenous and Community Conserved Areas and Territories) of Senegal, gathered in a national assembly June 28-30 in Ziguinchor.

Referring to article 25-3, line 4 of the Constitution states that, “Every citizen has the duty to preserve the country’s natural resources and environment and to work towards sustainable development that benefits current and future generations.”

Acknowledging the Convention on Biological Diversity and the Aichi Targets, of the Promise of Sydney from the Sixth World (Parks) Congress on protected areas;

Conscious of the role that communities should play in achieving these goals;

Concerned for our wellbeing and the future of our children and upcoming generations;

Concerned to preserve the cultural values related to the protection of nature;

2. Let us invite the Senegalese Government to recognize and assign value to the contribution of ICCAs as modes for the local governance of biodiversity;

3. Let us urge the Government of Senegal to support the identification and operation of ICCAs as territories of life of local communities;

4. Let us encourage technical and financial partners to directly support the ICCA custodian communities in their efforts to preserve and defend against the over-development of resources;

5. Let us urge the communities to continue committing themselves to preserve their ICCAs and developing methods that sustainably use their biodiversity for future generations.

6. Let us urge the ICCA custodian communities to revive cultural values and work to transfer knowledge for the benefit of the new generation.