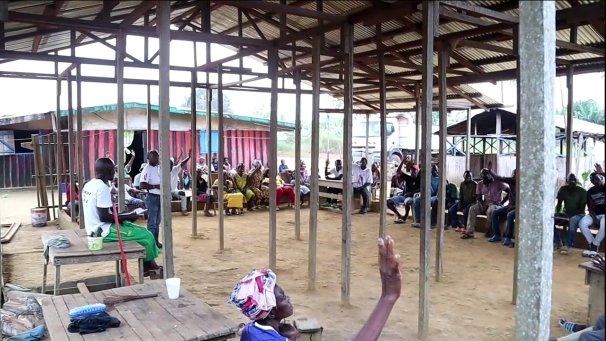 General Assembly of the Massaha community on 26/01/22. Credit: Ivindo FM

In northeast Gabon, the Kota community of Massaha has sustained their customary lands and sacred forest for generations. They are now seeking formal government recognition and protection against the imminent threat of logging

The Massaha community has reiterated their long-standing request to the Gabonese government to stop logging in their customary lands and sacred forest and protect it under existing legislation. Specifically, they filed a formal request in August 2020 calling on the government to declassify the 11,300 hectares of their forest – including six sacred sites and fourteen ancestral villages – that are currently overlapped by a concession issued to the Chinese logging company Transport Bois Négoce International (TBNI).

The community’s request asks for their forest to be reclassified under existing Gabonese legislation as a “protected area in hunting domain” they name Ibola Dja Bana Ba Massaha – the reserve of all Massaha’s children. This historic initiative would create the first community-established and -driven protected area in Gabon.

TBNI’s logging near the Massaha community has already destroyed nine ancestral villages. In a 2019 investigation, the Environmental Investigation Agency described TBNI as having “a modus operandi focused on quick profit and logging activities that do not respect the law.”

According to sources, TBNI has contracted WCTS,  “one of the most lawless [logging] companies operating in the country”, to start logging in part of the forest that has never been logged and is home to the village’s sacred sites, intact fishing and hunting grounds, and abundant biodiversity including endangered species like gorillas and chimpanzees.

On 13 January 2022, WCTS started reopening old logging roads leading towards the unlogged forest. They are doing so in the currently closed concession of a third logging company, KHLL, founded in 2014 in Gabon’s Special Economic Zone. The logging operations in the area are without an environmental impact study, which is required under Gabonese law. Numerous other laws are being ignored.

Gabon is one of the most forested countries in the world. It is known for its low deforestation rates and efforts to develop strong forest protection policies. In 2019, through the Central African Forest Initiative, Norway committed US$150 million for the protection of its forests, demonstrating recognition of Gabon environmental leadership in the region.

At the request of the Gabonese administration, on 28 November 2021 the community organized their third general assembly since the 2020 petition and reiterated their request to the Gabonese government. As they stated in their original request, the logging risks “destroying all the foundations of our village. We don’t want to be a village without roots and history.”

Following a series of national and international media stories covering the situation, the ICCA Consortium sent a letter on 21 December 2021 to Gabon’s Minister of Water, Forests, Oceans, Environment, Climate Change, and Land-use Planning, expressing concern for the current situation and voicing support for and solidarity with the community of Massaha. On 11 January 2022, the ICCA Consortium published an alert reiterating their concerns and calling on allied organizations and individuals to stand in solidarity with the community and their request for recognition and protection of their sacred forest.

At the time of publication, the government has not yet responded to the community or to the ICCA Consortium’s letter and alert. The community has a profound worry about losing their sacred forest and cultural roots in the days and weeks to come if the logging is not stopped.

An opportunity for leadership

At the High-Level Segment of COP26 of the UN Framework Convention on Climate Change in Glasgow, the President of the Republic of Gabon, S.E. Ali Bongo Ondimba, stated: “Gabon is the most carbon-positive country on earth … I plan to keep it that way… we must demonstrate strong leadership to all those who are watching us, in particular to future generations.”

In addition to their strong presence in the Climate Convention, Gabon is also a Party to the UN Convention on Biological Diversity and a member of the High Ambition Coalition for Nature and People. The government now has a clear opportunity to uphold its global commitments and demonstrate its environmental leadership by listening to the Massaha community’s request to halt the logging in their customary lands and sacred forest and formally establish Ibola Dja Bana Ba Massaha as a “protected area in hunting domain” under existing national legislation. To achieve just and effective conservation, the new protected area must be governed and managed by the community, in a self-determined manner that supports the customary rights, livelihoods, and culture of the people of Massaha.