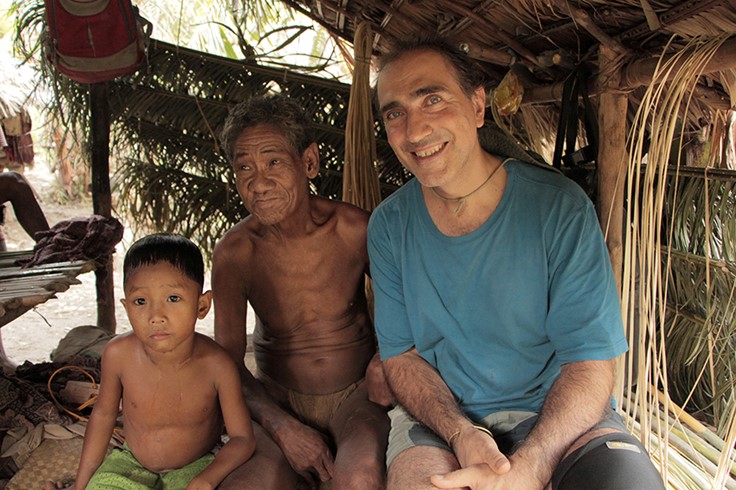 Dario Novellino (right) with the Batak in Palawan, Philippines. Photo: provided by the author

It is a great pleasure to announce that one of the earliest Honorary members of the ICCA Consortium – Dr. Dario Novellino – has just received the 2021 Elinor Ostrom Award on Collective Governance of the Commons in the Practitioner category. The ceremony has been diffused online and is available in the Ostrom Award website.

As the sound quality of the recorded ceremony is not excellent, I thought you may enjoy this short summary/excerpt from Dario’s acceptance speech:

“… in 1986, I reached Southeast Asia and began living with the Batak Indigenous Peoples in Palawan, an island considered the ‘last ecological frontier’ of the Philippines. […] In 1987, a logging company penetrated the area causing much destruction and fear [….] I helped the community to file a petition against the logging company, which was submitted to Corazon Aquino — the first democratic president of the Philippines elected after the 21-year Marcos dictatorship. A month later, the company license was revoked, that forest was saved, and it is still in good conditions today! Helping the Batak had put my life at risk, but I continued to support them and other communities through legal and paralegal means, as well as through international campaigns. Thousands of hectares of ancestral domain have been secured since then. […] In 1992, I was stopped at the Manila Airport, my passport was confiscated, and I was told by a lawyer friend that the only way for me to return to the Philippines was to affiliate with an academic institution as a researcher. This would have protected me from false accusations such as that of being a member of the communist guerrilla.

[…] I took that course: went back to Europe, and applied to study environmental anthropology at the University of Kent, where I completed my PhD in 2003 [… ] This is to say that my encounter with academia took place years after my engagement as an activist and advocate for indigenous peoples […] I have never visited an indigenous community with the idea of doing research ‘on them’… [on the contrary] it was my very special encounter with the Batak of Palawan that encouraged me to acquire an academic qualification. To them, and to my friends and colleagues of the Coalition against Land Grabbing, goes my highest gratitude…

Let me share some of my lessons learned […] Elinor Ostrom believed that collaboration for the commons is possible among individuals of different rationalities and within a large variety of contexts. Indeed, this is the case. But, in my experience, the collaboration needs […] a shared ‘knowledge base’, which is built only through strong dedication and a lifetime commitment. […] This is why I spent almost three decades in the Philippines. […] Also, advocates of the commons should be always mindful of the complex web of relations in which they work— within the community, with other organizations, with state and non-state agents like corporations. […] Those relationships can render vane any effort and jeopardize any ‘rules-in-use’ (using Ostrom’s words). […] And, when working for the commons, we should remember that circumstances may change very fast. After years of struggles for the protection of an indigenous territory, when the area is legally recognized and demarcated […] the political scenario changes, votes are bought for half a bag of rice, a new President comes along, new governors take the lead, the law is amended and modified and that territory— the one for which so many have been fighting for— is suddenly open again to industrial exploitation.

This happens all the time in Palawan where some so-called ‘core zones’ and ‘restricted zones’ are reclassified as ‘multiple use’ areas by the very agency in charge of sustainable development. So, let us not measure our results only in the short or medium term, let us not get discouraged […] sometimes victory builds up very slowly […] but let us remember that words have consequences, but also does silence. By not acting and not speaking up we become complicit with the system […] I encourage all to stand up for the commons, to always defend beauty and innocence, to maintain faith in life …”

Indeed, congratulations to Dario — a person who has refused to be ‘complicit with the system’ many times in his life! In recent years Dario has been living in Italy, supporting as a volunteer researcher the pastoralists of Aurunci and Ciociaria. Check this audio-visual platform for a glimpse of his work: https://vimeo.com/laziopastorizia

Dario is currently writing about the systems used by pastoralists to identify different goat breeds (which contrast starkly with those used by ‘zootechnical experts’) and making a documentary denouncing the impact of the wolf on the herders. He recently mentioned to me that the most dangerous animals are wolf/dog crossbreeds raised in the wild, which are very aggressive, have little fear of humans and do enormous damage to livestock. Dario is obviously not against wolf conservation initiatives but critical of the institutions in charge that do little to compensate the shepherds for their losses… He is also worried that the wolf species itself is endangered by its many crossbreeds with dogs.

Besides having been an Honorary member for a decade or more, Dario is affiliated with the Coalition Against Land Grabbing (CALG), a Member of the ICCA Consortium in the Philippines. In several posts on the Consortium’s website (such as those below), you can find Dario’s great pictures, short movies, and information on the Batak!

Rice-related knowledge, farming strategies and the transformation of swiddens amongst the Batak of Palawan Island, the Philippines (2015)