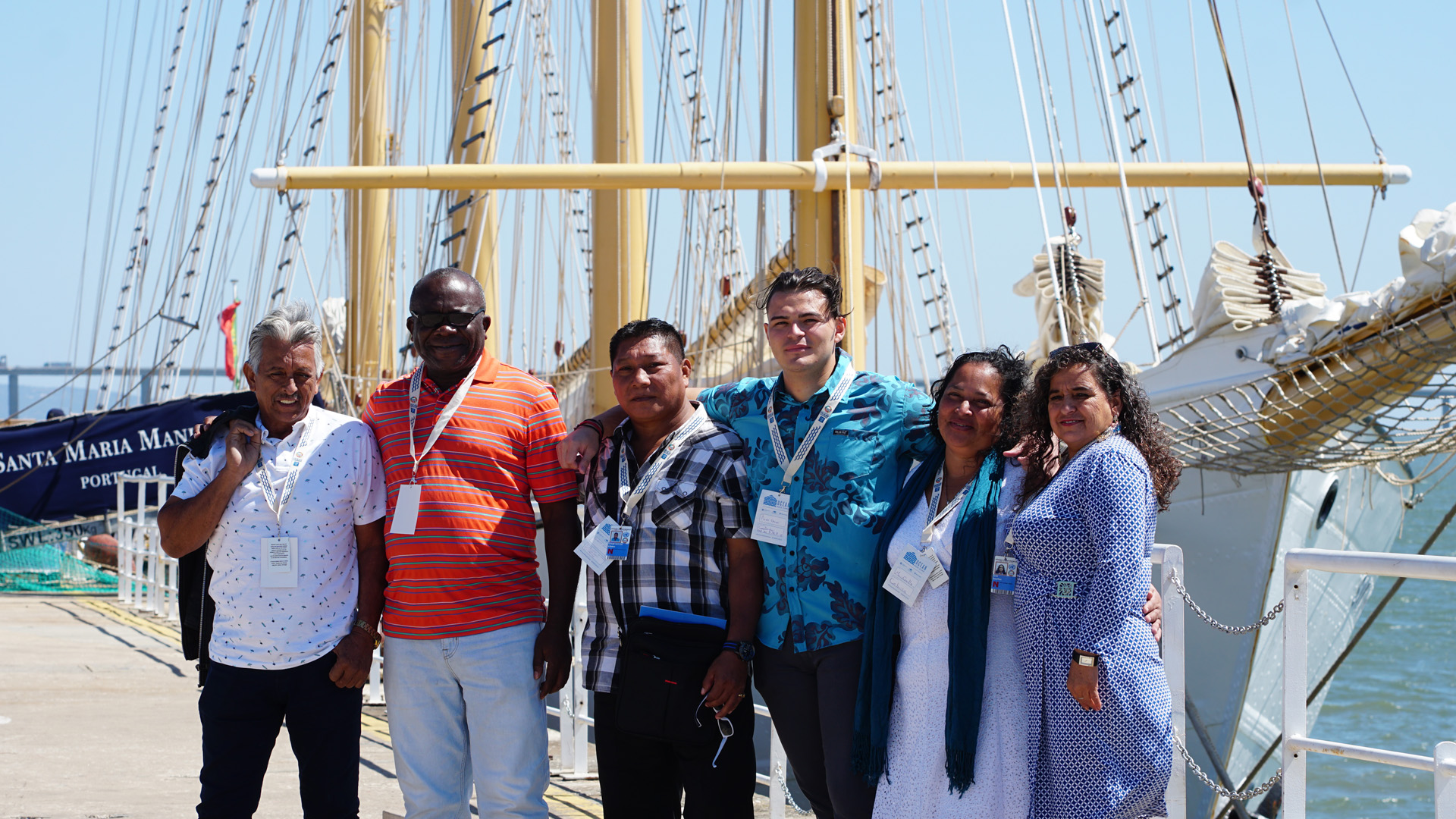 Some of the fishers and community leaders from coastal and island territories of life who attended the 2022 United Nations Ocean Conference in Lisbon, Portugal are pictured in this photo. (From the left) Rolando Ramirez, Felicito Nuñez, Alfonso Simón Raylan, Aaron Chacon, Maria Carrillo, and Josefina Mata Ceja. ICCA Consortium has supported various Member organizations, fishers, and representatives of Indigenous and local communities to participate in the conference. Photo: Mohammad Arju/ ICCA Consortium

During the recent United Nations Ocean Conference in Lisbon, Portugal, the ICCA Consortium supported the participation of various Member organizations, fishers, and representatives of Indigenous and local communities. Vivienne Solís Rivera and Marvin Fonseca (CoopeSoliDar R.L, ICCA Consortium Member) recount how participants from Indigenous and local communities made an impact in securing better recognition of their rights and more holistic conservation of the oceans

Before sharing our experience and reflections on the UN Ocean Conference, we would like to share information about our collaborative efforts with Indigenous and community fisherfolk in the Mesoamerica region.

On behalf of the ICCA Consortium, CoopeSoliDar R.L coordinated the participation of fisherfolk, Indigenous Peoples, and local communities in the United Nations Ocean Conference.

CoopeSoliDar R.L and the aquatic territories of life in the Mesoamerican region

CoopeSoliDar R.L. is a cooperative that has worked on issues of marine conservation and human rights, strengthening the capacities of Indigenous Peoples and local communities in the Mesoamerican region for 22 years.

The cooperative and its associates have worked alongside the ICCA Consortium since its inception to support the recognition, strengthening, and defense of both continental and marine territories of life. Two years ago, CoopeSoliDar R.L. formally joined the membership and is now an active part of the ICCAs in Mesoamerica.

In addition, CoopeSoliDar R.L. has participated broadly in regional and international arenas, strengthening the voices of local actors for the defense of human rights and biodiversity conservation.

Before the participation of the cooperative and its allies in Lisbon this year, extensive work was carried out, first virtually and then in person, to create a strong, unified voice in the Mesoamerican region — a voice coming from small-scale artisanal fisherfolk that could integrate the interests of peers from other regions of the world, especially Africa and Asia. This process responds to the fact that their voice was critically missing when coastal marine issues were taken up at the CBD meeting in Geneva months before.

Why did we participate in the UN Ocean Conference?

At the UN Ocean Conference in Lisbon, the participation of CoopeSoliDar R.L had four main strategies:

Opportunities for small-scale fishing, or the lack of them

Without a doubt, the UNOC convened a vast number of sectors with truly diverse interests. The majority were non-governmental organizations oriented toward the conservation of the sea (environmental NGOs). Very few opportunities were provided for the participation of local communities and Indigenous Peoples, which made it difficult for them to participate directly, even in dialogues and spaces that were supposedly open to them and their voices.

The effort of the delegations of fisherfolk from Africa, Asia, Latin America, and the Pacific and of the organizations that accompanied them in promoting and strengthening their call to action was evident throughout the different formal and informal spaces of the conference. Extensive media coverage recognized their voice, and there was a final mention of the need to consider this sector a fundamental part of the decisions of the Ocean Decade.

From the technical side, CoopeSoliDar R.L. articulated its vision on the issues of human rights, governance, traditional knowledge, and gender equality, providing an important counterbalance to the radical economic or environmental positions. The participation of the Mesoamerican representatives made it possible to strengthen capacities, as seen in the motivation of the leaders who participated in the Conference and in their work after being in Lisbon. Some representatives are preparing themselves to participate in the COFI 35 meetings in Rome.

From our perspective, during this event, it was possible to strengthen the relationship between small-scale artisanal fishing movements in Africa, Asia, Latin America, and the Pacific, where Mesoamerica is included and positioned. In addition, this enabled us to create our own post-UNOC agenda and use it as a key roadmap in the fight for a human rights approach to marine conservation and development.

We believe some elements may make the 30 by 30 a risk if we fail to develop safeguards that guarantee the implementation of free, prior, and informed consent and the sovereign rights of fisherfolk from communities and Indigenous Peoples that would be affected by this marine conservation measure.

It seems that the clear orientation toward the blue economy issues of environmental NGOs, private companies, governments, and the 30 by 30 coalition, will set the global agenda for the conservation and development of the oceans. This would constitute an evident threat to the ways of life and marine territories of life defended by the world’s small-scale artisanal fisherfolk. The call to action is crucial for the future, and the ICCA Consortium should support this position after debating and discussing it with its membership.