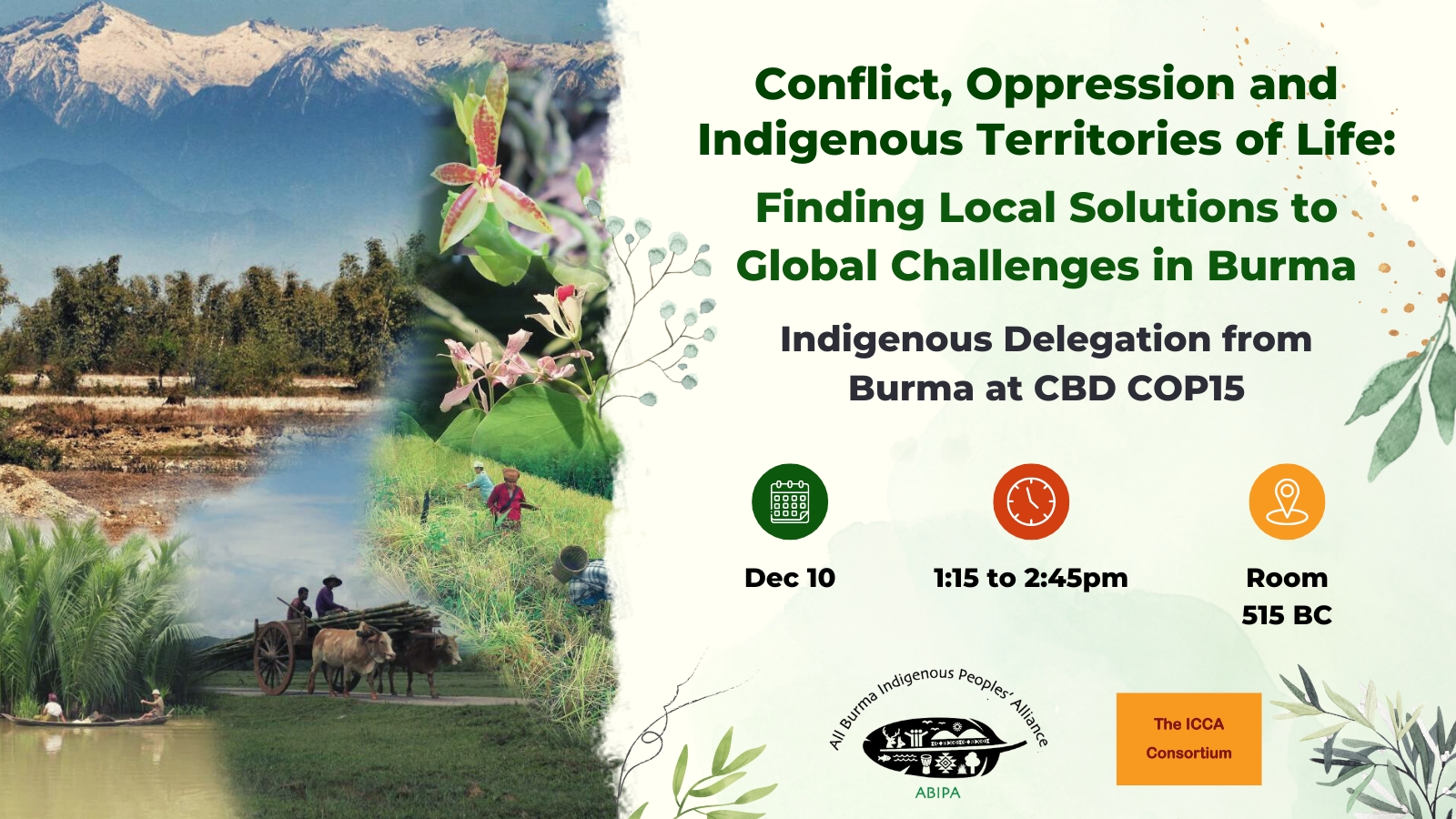 On December 10, 2022, at the UN Biodiversity Summit, CBD COP15, a delegation of Indigenous leaders from Burma will speak about the successes of Indigenous solutions to pressing conservation challenges despite the insurmountable violence and hardships that indigenous peoples in Burma face

By All Burma Indigenous Peoples Alliance (ABIPA) and ICCA Consortium

(Montreal, December 9, 2022) — A delegation of Indigenous Leaders from Burma is in Montreal, Canada, this week for the 15th Conference of the Parties (COP-15) to the UN Convention on Biological Diversity (CBD).

Since the military coup on February 1st, 2021, Indigenous peoples, their territories, and biodiversity have come under intense pressure from military offensives, aerial attacks, and rapid logging and mining operations.

Since the military coup, over 2,500 civilians have been killed, 16,000 have been arrested, and over one million have been displaced by intensifying conflict (Source APPB). Over half of these have been in Indigenous territories.

In a unique setting, Indigenous leaders will hold an event on the 10th of December 2022 to tell the world about the atrocities in their territories.

Oppression and Conflict are Drivers of Biodiversity Loss

From Ukraine to Yemen to Burma, conflict, oppression, and dictatorship are some of the world’s worst drivers of biodiversity loss and environmental destruction. In Burma, since the military coup, Indigenous communities across the country have reported a rapid increase in mining and logging – direct drivers of biodiversity loss – in their territories. Indigenous Peoples and environmental defenders also face lethal retribution if they challenge the plunder of their forests and biodiversity. Lessons from Burma and beyond are clear: without democratic governance and respect for human rights, biodiversity protection is impossible.

Despite the insurmountable hardships and challenges that Indigenous Peoples in Burma face, they have made huge contributions towards biodiversity protection. As a result, Burma continues to hold some of Southeast Asia’s largest contiguous rainforests that support a range of vulnerable and endangered species, including a considerable population of tigers.

Initiatives such as the Salween Peace Park, 5,400 km2 of Indigenous territory in the conflict-stricken northern Karen State, demonstrate the significance of Indigenous knowledge, ingenuity and practice in protecting contiguous forests and globally threatened biodiversity. Similar examples of Indigenous-declared protected and conserved territories can be seen across the country, from the southern coastal region of Tanintharyi Region to the far northernwest Naga Hills.

Whose Biodiversity? Whose Global Framework?

Over 50% of the world’s population lives under dictatorships and authoritarian regimes, many with a track record of environmental exploitation and plunder. Within this context, Indigenous leaders from Burma ask – whose global biodiversity framework is being negotiated? Where nation-states are environmental destroyers, the UN CBD and other international mechanisms must recognize the Indigenous Peoples’ considerable efforts, supporting their efforts rather than the plans of central governments – particularly where military dictatorships control those governments.

Profiles of delegation of Indigenous Leaders

Paul Sein Twa, winner of the 2020 Goldman Environmental Prize, is co-founder and director of the Karen Environmental and Social Action Network (KESAN, ICCA Consortium Member). Paul is Chairperson of the Salween Peace Park, Burma’s largest Indigenous-declared protected and conserved area. Founded on the principles of peace and self-determination, ecological integrity, and cultural survival, the Salween Peace Park is an expression of Karen identity and protects the last dam-free main river in Asia and more than 5,400 square kilometers of globally significant biodiversity. The Salween Peace Park was a winner of the 2020 Equator Prize. Paul is an executive member of the All Burma Indigenous People’s Alliance (ABIPA).

Frankie Abreu is founder and director of Tenasserim River and Indigenous People’s Network (TRIP NET) in Burma. Among his wide-ranging work in the human rights and environmental sectors, Frankie conducts research, develops forest policy and promotes Indigenous knowledge and culture – all in live conflicts areas in Tanintharyi region of Burma. He is co-chair of ABIPA.

Steward is Chairperson of the All Burma Indigenous Peoples Alliance (ABIPA). He has worked in Indigenous research and advocacy since 2012 at the national and international levels. He is known for defending human rights and the environment with special focus on Indigenous communities across Burma.

Esther Wah is an Indigenous Karen woman and Secretary of All Burma Indigenous Peoples Alliance (ABIPA). She works with ethnic communities across Myanmar on the right to protect land and forest. As coordinator of Conservation Alliance Tanawthari (CAT), Esther has worked with civil society organizations and Indigenous communities in Tanintharyi Region in southern Burma for the past decade, supporting communities to defend their territories against destructive development projects and to implement their own grassroots models of forest conservation. She is also an Honorary member of the ICCA Consortium.

Due to continued security concerns, we ask journalists to seek the explicit consent of the Indigenous leaders in the delegation before any photographs are taken or published. We also ask journalists to use the names below, some of which are pseudonyms, to protect the identities of the delegates.

All Burma Indigenous Peoples’ Alliance (ABIPA) is a nationwide network of civil society and community organizations in Burma.

The ICCA Consortium is a membership-based association dedicated to promoting appropriate recognition and support for territories and areas conserved by Indigenous Peoples and local communities (abbreviated as “ICCAs” or, more simply, “territories of life”). For more information, please visit www.iccaconsortium.org