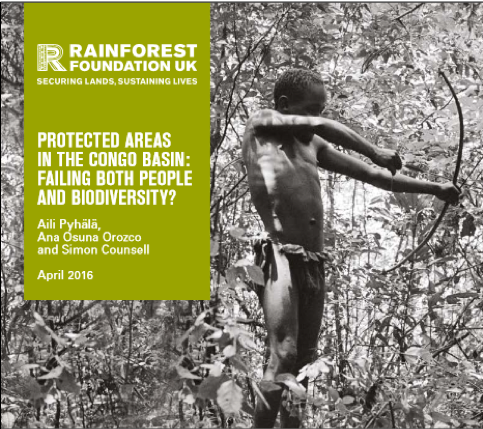 A new report on the effectiveness and impacts of the protected area system in the Congo Basin is now available. It is based on the most comprehensive research of its kind ever undertaken. Its conclusions are alarming:  conservation efforts in the region are falling well below expectations, both in terms of respecting local peoples’ rights and conserving wildlife.

The study finds that forests set aside as protected areas are often based and managed on the false premise that they are ‘wilderness areas’ when in fact they are typically landscapes that have sustained human livelihoods and wellbeing for generations. So-called “fortress conservation” has placed conservation authorities in direct conflict with local communities. Of the 34 protected areas included in the study: Youths in the Tumba Lediima Reserve, excerpt from the Video © RF UK

Moreover, despite hundreds of millions of dollars invested in the Congo Basin protected area system over the past two decades, the study finds there is little evidence for it being effective in conserving biodiversity. Wildlife baseline data is poor, but populations of megafauna are in sharp decline.

The report calls for a complete rethinking of how forest protection in the Congo Basin is conceptualised and implemented. It includes detailed recommendations towards sustainable conservation models which recognise the rights of local people and their critical role in protecting forest wildlife.

Follow this link to download the report: “Protected Areas in the Congo Basin: Failing People and Biodiversity?”

Watch also this related short film about forest communities affected by the Tumba Lediima Reserve in the Democratic Republic of Congo (DRC). Download it here.