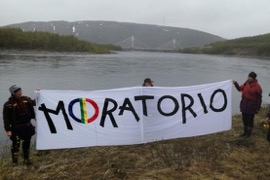 In June 2017 I had the privilege of being part of a delegation (organized by Greenpeace Finland) to northern Finland, i.e. Sápmi, the homeland of the Saami (the only officially recognized indigenous peoples in the European Union). The purpose of the mission was to have meetings with key contact people, both political representatives and reindeer herders and fishermen, as well as local activists who have been working to negotiate Saami environmental rights.

There are two priority issues regarding ICCAs that were examined and discussed during this trip were: 1) the current status of the reindeer husbandry act (poronhoitolaki) which, according to my Saami informants, needs to be renewed, together with the state-run top-down system of forest management (including logging), and; 2) the case of the Deatnu River fishing agreement, imposed by the Finnish and Norwegian governments, restricting traditional Saami fishing rights on both sides of the Deatnu river.

On forest management and reindeer herding

Reindeer husbandry is regulated by the Ministry of Agriculture and Forestry, considered to be part of the national agricultural sector. Fences have been raised around the areas of the various reindeer cooperatives, and these fences stand as a direct obstacle to the free roaming of the reindeer, however, the Saami know well that reindeer need more migratory land surface area than what is currently designated, as the reindeer are limited to too closed-in migratory spaces. Meanwhile, no one has looked in depth at the impacts of state logging on reindeer feeding grounds. Despite the controversies, a strong and biased anti-reindeer herding research agenda continues to guide national policy-making and logging operations.

The Finnish government is reluctant to allow the reindeer to roam freely in larger areas, as this would mean handing over more land back to the Saami (land which was originally Saami territory). Related to this, the next new threat to Saami livelihoods and the long-term sustainability of Lapland is tourism, which directly affects and disturbs the reindeer, and hence also Saami livelihoods and wellbeing. As for forest management, the state agency in charge, Metsähallitus, continue to clear-cut forests on Saami land, without free, prior, informed consent. Indeed, the activities of Metsähallitus in Lapland is illegal, as they have no mandate to carry out logging on Saami territory, according to international indigenous rights law. The Saami have tried to negotiate with Metsähallitus, but have found it very difficult, due to power imbalances. Based on all logic and evidence, logging in Northern Lapland makes no economic sense whatsoever, as it takes close to 200 years for a forest in Northern Lapland to regenerate. Meanwhile the reindeer depend on these forests and the lichens within for their food.

On fishing rights in the Deatnu

Earlier this year, an agreement was signed between the governments of Finland and Norway, which severely cuts down on the traditional fishing rights of the local Saami population. This has resulted in local resistance; in fact, the clear majority are in opposition of the new agreement, especially as there was no form of FPIC in the decision-making process. Furthermore, the studies that have informed this new agreement have almost completely disregarded local environmental knowledge. A local activist group, Ellos Deatnu, have declared a Moratorium to the fishing law, while they plan to write their own Deatnu Saami Law on collective fishing rights. In Finland and Norway, fishing legislation is grounded on individual land ownership, and does not recognize collective rights. Similarly, indigenous rights are not recognized in the law, so the Saami have to be careful in negotiating their rights, so as not to trample on local non-Saami rights (who may also be land-owners). Both the Finnish and Norwegian Saami parliaments have stated that traditional fishing rights should be the number one priority in defining the law. In the current agreement, these are acknowledged, but not addressed. Traditional Saami fishing knowledge and practice is on the brink of disappearing, and this new law only exacerbates the situation.