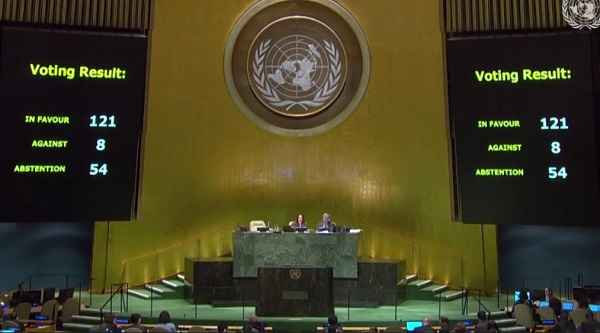 On 17 December, after a 17-year long process, the UN General Assembly adopted the UN Declaration on the Rights of Peasants and Other People Working in Rural Areas with 121 votes in favour, 54 abstentions and only 8 votes against it. The new Declaration is a powerful tool to advance the local-to-global struggle for food sovereignty, equitable and sustainable food systems and more broadly for the rights of peasants, Indigenous peoples, small-scale fishers and fish workers, pastoralists, foresters and other local communities working in rural areas. We acknowledge and applaud the hard work of international peasant movement La Via Campesina for initiating and nurturing this process over the years, along with many supporting social movements and allied organisations such as FIAN and CETIM. As noted by La Via Campesina, now that the declaration is an international legal instrument, allies need to mobilise to support regional and national implementation processes.

“Globally, peasants feed the world, but their own enjoyment of their human rights is challenged, including their own right to food,” said the UN High Commissioner for Human Rights, Michelle Bachelet, upon the adoption of the Declaration. “I hope this Declaration will serve to enhance States’ commitment at all levels to uphold and protect the rights and dignity of peasants and other people working in rural areas. They play a critical role in preserving our culture, environment, livelihood and traditions.”

The UN Declaration on the Rights of Peasants and Other People Working in Rural Areas is available to download in the six UN languages at: http://undocs.org/en/A/C.3/73/L.30