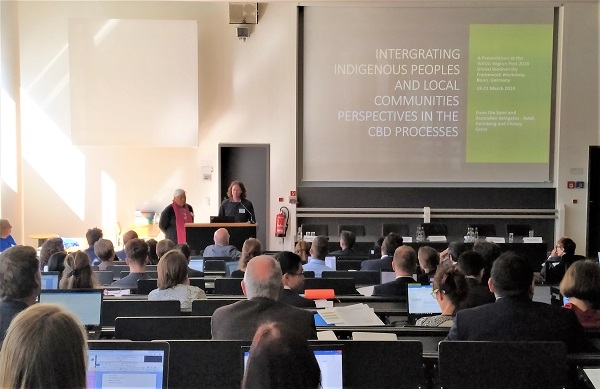 The ICCA Consortium has been active for many years in the UN Convention on Biological Diversity (CBD), successfully advocating for recognition of ICCAs-Territories of Life in many decisions and areas of work. As the deadline draws near to achieve the 2011-2020 Strategic Plan and Aichi Targets, CBD Parties and observers are embarking on an intensive process to develop the follow-up agreement – known as the post-2020 global biodiversity framework. Parties agreed that the process to develop the post-2020 framework must be (among other things) inclusive, participatory, transparent and transformative (see Decision XIV/34). After a series of official consultations and negotiations as well as independently organised events, Parties are expected to adopt the post-2020 framework at the 15th Conference of the Parties to the CBD (COP 15) in late 2020 in Kunming, China.

So far, the ICCA Consortium has contributed written submissions on both the process and content of the post-2020 framework and will continue to prepare submissions and statements as part of the negotiation process. In addition, thanks to several dedicated Members and Honorary members who generously volunteered their time, we have also participated in all but one of the official regional and global consultations to date, including:

Our strategy for participating in these consultations has been guided by the ICCA Consortium’s submission to the CBD Secretariat on the preparation, scope and content of the post-2020 global biodiversity framework (December 2018), which was further developed through several parallel discussions. For example, a discussion during the ICCA Consortium European Regional Assembly highlighted the need for meaningful targets for collective governance of ICCAs–territories of life that are mainstreamed in national legislation and policy. For these targets to be well developed, it is necessary to agree on national baseline data about both rights and claims of collective governance of ICCAs–territories of life.

During all of the regional consultations, ICCA Consortium Members and Honorary members worked jointly with key observer caucuses, including the International Indigenous Forum on Biodiversity (IIFB), the CBD Alliance (a network of civil society organisations), the Women’s Caucus and the Global Youth Biodiversity Network (GYBN). This approach brought together diverse voices on many of the key issues and helped build a spirit of collaboration among the observer groups. Most of the consultations provided a platform for open exchange of ideas, giving as much voice to the observer participants as to the Parties (governments). Each regional consultation emphasised the need to have gender as a cross-cutting theme, and this was explored in greater depth at the dedicated expert meeting on gender considerations. One of the key outcomes of this expert meeting was a statement endorsed by UN Women and several other organisations, including the ICCA Consortium (available online). However, the consultations were not without some challenges.

The Asia-Pacific consultation was the first regional consultation to be held. Despite the COP14 Decision urging Parties to be ambitious and transformative, the sentiment in the consultation was anything but. Many Parties chose to focus their interventions on promoting protected areas without even acknowledging diverse governance types.

The regional consultation for Western Europe and others turned to be a unique opportunity for exchange on several key issues that were (somewhat surprisingly) welcomed by the Party delegates, such as the need to better take into account conservation by Indigenous peoples and local communities, women and other genders, and the urgent need to protect and secure territories of life and their defenders. However, much work remains to be done to translate this general goodwill into concrete actions on the ground and to confront the more systemic issues that are driving biodiversity loss. For example, it was a real challenge to bring up the negative impacts of the European Common Agricultural Policy and the impacts of European transnational corporations or governmental actions outside of Europe. One of the key elements of the ICCA Consortium’s position – the crucial importance of eliminating or reforming perverse incentives – was not addressed at all. At the same time, the huge emphasis on global communication of biodiversity challenges and the CBD to the general public seemed a bit like window dressing or a short cut, when Parties were not willing to address more fundamental issues with driver of biodiversity loss and implementation of the CBD and this was more poorly tackled;.

In the regional consultation for Africa, participants acknowledged the need to focus more on mainstreaming biodiversity issues, including Indigenous peoples and local communities and gender, within governments and NGOs. Concerns were also raised about insufficient resources for African delegates to participate in CBD meetings and for implementation of the Convention within their countries. This consultation usefully underscored the need for greater focus on gender equality in the CBD and called for a working group on mainstreaming gender.

The regional consultation for Latin America and the Caribbean had more than 80 participants from Parties, international agencies and civil society. In general, there was good reception and acknowledgement of the important role of indigenous peoples and local communities in the post-2020 framework. However, when going into more deep discussion about setting ambitious targets for this, some Parties raised concern in moving forward as they considered indigenous peoples and local communities as already having ‘gained too much’. At the end of the consultation, the civil society group, of which the ICCA Consortium was part, faced some challenges with the Brazilian delegation, backed up by Argentina, attempting to exclude them from discussions, despite the COP14 decision clearly requiring the process to be inclusive of indigenous peoples and local communities and civil society organisations. This group issued a declaration to invite all Parties to keep the CBD consultation process participatory, inclusive and transparent. You can read the shortened version of the declaration here (in Spanish).

The official regional consultations have now concluded. Coming up quickly is the first meeting of the Open-ended Working Group on the post-2020 framework (27-30 August in Nairobi, Kenya) where the negotiations will begin in earnest. The first meeting will draw on written submissions and the outcomes of the regional and global consultations up to that point, and is expected to identify a number of thematic issues. Subsequent meetings and updates of the Working Group are expected to take place in conjunction with the regular CBD inter-sessional meetings in November and in July 2020, with other meetings to be held subject to available resources. Culminating at COP15 in late 2020, the process to develop the post-2020 framework is a crucial opportunity to advance global recognition of and support for ICCAs–territories of life, their legitimate governance authorities and stronger security of tenure for their indigenous peoples and local community custodians, and to advocate for prevention of and protection against threats, in particular through policy and legal frameworks that protect territories of life from undesired extractive concessions in perpetuity. Featured image: Aslak Holmberg for the IIFB at the Regional consultation for Western Europe and others. (c) E. Courtine