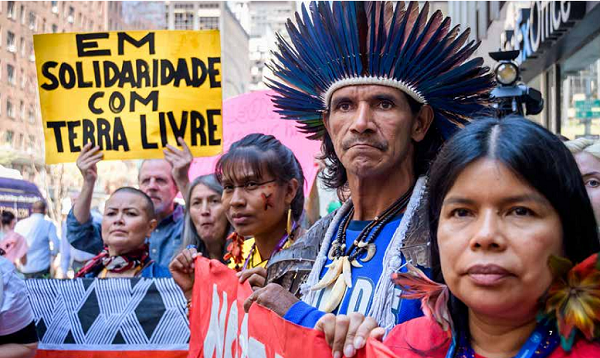 According to Global Witness’ latest report, “more than three people were murdered each week in 2018, with countless more criminalised, for defending their land and our environment”.

As stated by Victoria Tauli-Corpuz, UN Special Rapporteur on the Rights of Indigenous Peoples: “This is a phenomenon seen around the world: land and environmental defenders, a significant number of whom are indigenous peoples, are declared terrorists, thugs, or criminals for defending their rights, or for simply living on lands coveted by others. Because they steward many of the world’s remaining natural resources—lands that are prime targets for development projects—they suffer disproportionately from violence and criminalization.”

Murders of indigenous and community leaders and activists are the most visible form of violence, but in most cases, they are targeted by a spectrum of threats, harassment and criminalisation. These acts of violence are not only committed against individuals but also against entire organisations and communities. States and corporations criminalise indigenous peoples and local communities in attempt to deter them from resisting threats to their rights and territories of life – often in the name of ‘development’ such as mining, agribusiness and large infrastructure projects.

This Global Witness report analyses 2018 key data, figures and human stories on criminalisation and killings of land and environment defenders and proposes recommendations. The ICCA Consortium is sharing this report as a fellow member of the Defending the Defenders Coalition along with Global Witness, and as part of the Consortium’s policy on “Defending Territories of Life and their Defenders”.

Julián Carrillo knew he was a marked man. As vocal opponent of the mining concessions on his community’s land, in Chihuahua State, Mexico, he had seen five members of his family killed in two years and his house burned down. Julián had received numerous death threats before his body was found riddled with bullets on 24 October 2018.

Fighting to protect land and the environment has become more dangerous in Mexico, with at least 14 people killed in 2018 alone. But Carrillo’s death also fits a worrying global trend. As demand for products like timber, palm oil and minerals continues to grow, governments, companies and criminal gangs are routinely stealing land and trashing habitats in pursuit of profit. When the ordinary people who live on these lands take a stand, they come up against companies’ private security, state forces, contract killers, or in less violent confrontations, teams of aggressive lawyers.

The data, analysis and human stories in this report highlight the scale of this problem. We seek to understand how and why land and environmental defenders who should be celebrated as heroes for protecting their communities and ecosystems are routinely being murdered, arrested and intimidated. Our report finds that on average more than three activists were killed every week in 2018 defending their land from invasion by industries like mining, logging and agribusiness. The real figure is likely to be much higher, because cases are often not recorded and very rarely investigated. Reliable evidence is hard to find or verify.

This report also highlights how killings are the most violent manifestation of myriad abuses. Non-lethal violence and intimidation is rife, and similarly often undocumented. Alongside the physical abuses, governments and businesses use courts and legal systems to silence those who threaten their interests. In a brutally savage irony, killers of land and environmental defenders generally escape punishment while the activists themselves are branded as criminals.

That is why this year, for the first time, Global Witness has documented the use and abuse of laws and policies designed to criminalise and intimidate defenders, their families and the communities they represent. These tactics can be used to tarnish reputations, choke off funding and lock activists into costly legal battles that stop them from carrying out their work. Cracking down on one individual or organisation also creates a powerful chilling effect for would-be defenders.

These subtler threats don’t make the headlines like killings do, which is why they are so useful to those who want to crush dissent. As with killings, indigenous people are on the frontline of attacks by countries’ legal systems, alongside the institutions and organisations that exist to protect them.

While this report focuses on events in 2018, at the time of writing in July 2019, the signs are worrying that the situation for environmental and land defenders will worsen. The rise of populist strongmen around the world has brought a clampdown on protest, often under the pretence of protecting national security or fighting terrorism. The broader social and political consequences of these developments are generally dire, and they bring specific dangers for defenders, as these examples show:

Brazil’s new President Jair Bolsonaro has pledged to open indigenous reserves to commercial development, including mining, agriculture and infrastructure. In 2019 this has already triggered a series of invasions of indigenous lands by armed bands of land grabbers, with communities living in fear of future attacks.

In the Philippines – where we documented more killings in 2018 than in any other country – state intimidation of defenders has continued into 2019. President Rodrigo Duterte’s government has ramped up its campaign of “red-tagging” rights activists, including land and environmental defenders, as communist sympathisers, terrorists or supporters of a group of armed insurgents called the New People’s Army (NPA). In January 2019, two indigenous leaders protesting against resource extraction and military encroachment on ancestral lands were accused of serving as recruiters for the NPA and arrested – allegations they deny.

In the US, President Donald Trump’s “energy dominance” agenda is threatening to stoke conflict over access to land and natural resources. A number of deals are planned that would see large tracts of native lands handed out to oil and gas companies. Seven US states have also introduced legislation to crack down on protest since 2018, according to the International Center for Not-for-Profit Law. In March 2019, a Bill passed in South Dakota gave state and local governments new powers to penalise groups and individuals even indirectly involved in anti-pipeline actions.

Those risking their lives to stand up for land and environmental rights carry an important message that our patterns of consumption and production need to radically change. Companies, the consumers who buy from them, the investors who bankroll them, and the governments that regulate them must all take steps to ensure that our growing demand for food and resources does not drive land grabbing and irrevocable environmental harm.

Conflicts over land and resources could be avoided in the first place if communities were consulted on how land was used and could veto damaging projects. If laws were designed to favour the rights of citizens over the interests of big business, communities and ecosystems would inevitably be safer and healthier. And numbers of attacks against those who stand up for their rights would undoubtedly fall if those responsible were brought to justice.

Featured image : In April 2019, activists in New York and several other cities around the world demonstrated in front of Brazilian embassies in support of Brazil’s indigenous resistance movement. Indigenous communities have suffered an increase in violent raids on their land since Jair Bolsonaro took office at the beginning of the year. © Erik McGregor/Pacific Press/LightRocket via Getty Images.