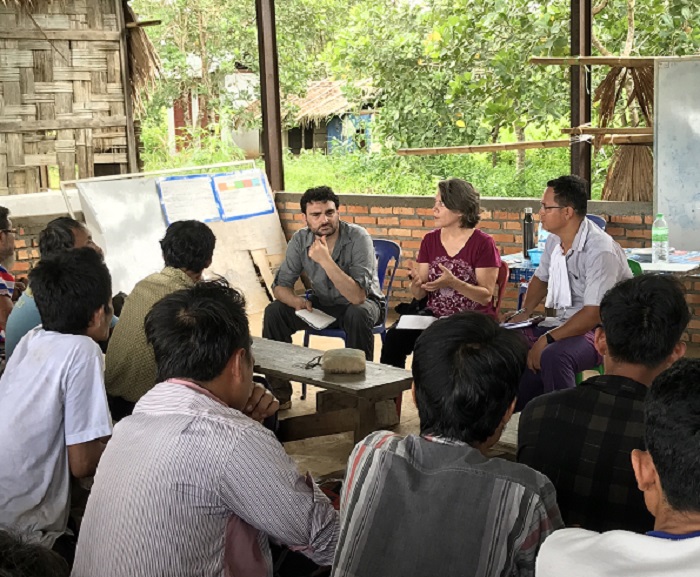 By the Conservation Alliance Tanawthari and the Accountability Counsel.

About 150 community members from several Karen Indigenous villages in Lenya area met with the UNDP watchdog, known as the Social and Environmental Compliance Unit (SECU), to voice their concerns about the “Ridge to Reef project”. The US$21 million project will establish a massive interconnected government Protected Area spanning 3.5 million acres in Tanintharyi Region, and is being implemented by the UNDP, through funds from the Global Environment Facility (GEF), with support from the Myanmar government, Flora and Fauna International (FFI), and the Smithsonian Institute.

“We understand there are about 224 villages within the project area, including 73 Indigenous Karen villages. This project threatens the land and forest rights of thousands of Indigenous people, the rights of refugees and Internally Displaced Persons to return to their land in the project area, and may undermine peace and stability in the Region,” said Saw San Ngwe, Director of Southern Youth, a member of Conservation Alliance Tanawthari (CAT), a coalition of Karen community organizations working to protect the rights of communities in Tanintharyi Region.

CAT filed a complaint to SECU in August 2018, requesting an investigation into violations of the UNDP’s social and environmental safeguards, and calling for the suspension of the project, which poses considerable and irreversible harms to indigenous communities. After finding the complaint eligible, SECU conducted the first of two investigation visits to communities from July 18-20, 2019. UNDP Myanmar has reportedly suspended the project until the investigation is complete.

Villagers told the SECU delegation, comprised of Compliance Officer, Ms. Anne Perrault, and Unit Head, Mr. Paul Goodwyn, that the government cannot be trusted because its “protected areas” in the region have deprived forest-dependent communities of their livelihoods and way of life. Instead of conserving the forest, the government has allowed rampant logging and granted large concessions to commercial actors, including palm oil  plantation companies. Meanwhile, Karen indigenous communities have successfully conserved their forests and biodiversity according to traditional practices for centuries. For these reasons, they told the delegation decisively that they did not want this project. “This project is being developed with a top-down approach to conservation that puts Indigenous Karen communities at risk,” said Naw Ehhtee Wah, coordinator of CAT. “We are calling on the government and UNDP to recognize and respect the customary lands and conservation practices of indigenous communities. Until these are recognized in full, this project should not go ahead.”

Myanmar law currently does not recognize the customary tenure systems of Indigenous people, even though these systems have been used to manage and protect areas of important biodiversity for generations. Communities and CAT are developing an alternative model for conservation in the area, based on traditional territories and conservation practices akin to the efforts of communities in Karen state that have established the Salween Peace Park. Villagers told the SECU delegation they were never consulted about the project. They also expressed their concern that the project will re-ignite conflict as it excludes the Karen National Union (KNU), which jointly administers project areas together with the government, breaking the terms of the 2015 Nationwide Ceasefire Agreement (NCA).

“By failing to ensure adequate consultation with communities to secure their free, prior and informed consent, the UNDP is violating the UN Declaration on the Rights of Indigenous Peoples and the UNDP’s own social and environmental safeguards,” said Anirudha Nagar, Communities Co-Director at Accountability Counsel, a legal organization supporting CAT on the UNDP complaint process. Given the severe risks to Indigenous communities living in a ceasefire zone, it is unacceptable that the UNDP categorized this as a moderate, instead of high risk project, and failed to conduct a robust Indigenous Peoples Plan and Social and Environmental Impact Assessment.”

SECU informed communities that they expect to release their final investigation report in early 2020 after speaking with all key parties, including UNDP Myanmar, GEF, FFI, KNU, and government authorities. The report will include recommendations to the UNDP Administrator for how the project can remedy UNDP safeguards violations and respect Indigenous Peoples rights.

“We hope the investigation team understands the situation in our region and will issue strong recommendations to resolve the communities’ concerns, and that the UN Administrator will act upon them accordingly. Until the fundamental problems of this topdown colonial conservation project have been addressed, it should not be allowed to continue,” said Naw Ehhtee Wah.