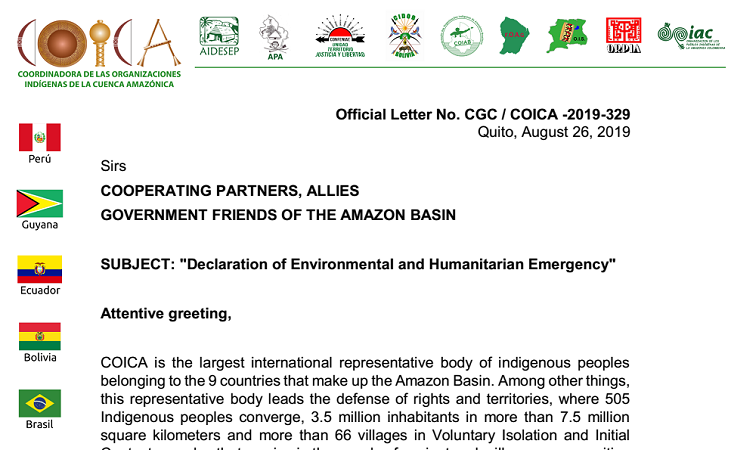 By the Indigenous Coordinating Body for the Amazon Basin (COICA).
Introduction by Thomas Moore, member of the Council of Elders of the Consortium.

COICA (the Indigenous Coordinating Body for the Amazon Basin) is declaring a human and environmental emergency and calling upon the international community to express its solidarity with the Amazon first peoples and their forest homes now being destroyed by fire. The Amazon forests are the home and habitat of diverse original peoples who have managed and conserved them for millennia. They provide oxygen and a measure of ecological balance to the entire world. This emergency situation, in which over two millions hectares of forest have been lost is a result of public policies of the Brazilian and Bolivian governments. That situation was predictable and preventable.

The crisis arose after President Bolsonaro publicly called upon Brazilian ranchers, farmers, and timber extractors to invade the Amazon Basin forests, lands, and waters and assured them of the support of his government. He also put in place policies and government administrators who support policies intended to favor political allies, including mining and agro-industrial firms. The fires, set to help clear and gain rights and control over lands got out of hand with the help of wind and dry climatic conditions in both Brazil and Bolivia. Now the challenge is to find solutions, not just fix the blame, but the solutions require radical policy changes.

COICA and its affiliated organizations and local communities deserve the solidarity of all people of good well.

COICA is the largest international representative body of indigenous peoples belonging to the 9 countries that make up the Amazon Basin. Among other things, this representative body leads the defense of rights and territories, where 505 Indigenous peoples converge, 3.5 million inhabitants in more than 7.5 million square kilometers and more than 66 villages in Voluntary Isolation and Initial Contact; peoples that survive in thousands of ancient and millenary communities in the most important biome in the world, by virtue of their spiritual ecosystem connection, with a unique cultural diversity, based on a holistic relationship with the territory.

We are addressing to all our allies and international cooperation due to the situation of Genocide and Ecocide present throughout the region of the Amazon basin as a result of the policies of the governments involved, especially the governments of President Jair Bolsonaro and President Evo Morales, which undermine the fundamental rights of the indigenous peoples of the region and against the rights of the Mother Nature. Today the lung of the world burns in flames, leaving irreparable environmental and socio-cultural damage: millions of inhabitants and species of fauna and flora, (sacred sites, sacred basins, sacred plants) affecting traditional and spiritual knowledge systems, governance, traditional medicine, and with them the ancient ancestral knowledge and customs and customs of the indigenous peoples living in the Amazon Basin, with serious consequences for humanity.

More than 20 days of forest fires have passed in the Amazon that leaves a balance of 1 million hectares affected in the Chiquitania Boliviana and 1.5. millions in the Brazilian Amazon, according to data provided by indigenous organizations. If the fires continue in the Amazon, 44,000 species of plants, 2,200 species of animals, 10% of the planet’s carbon stock, 2,500 species of freshwater fish, 11,000 years of settlement, 1,000,000 km2 are at risk of aquatic ecosystems, 17 to 20% of the planet’s freshwater and 34,000,000 million people directly affected.

Faced with this unprecedented environmental crime, the actions of the governments of Brazil, Bolivia, and the region, in general, have been insufficient  to address the situation effectively and in a timely manner; fact that so far has allowed the fires to continue and increase in quantity and magnitude.

Therefore, from COICA, we have declared the “ENVIRONMENTAL AND HUMANITARIAN EMERGENCY IN THE AMAZON BASIN”, in order to summon the solidarity of the world, of international allies, environmentalists and others. In the same way, to control and extinguish fires and provide humanitarian support to our brothers and sisters of the indigenous peoples of COIAB – BRAZIL and CIDOB – BOLIVIA, we have activated the emergency protocol together with the creation of a humanitarian campaign called “LET´S SAVE AMAZON RAINFOREST” and the activation of the “ SOLIDARITY FUND OF THE AMAZON BASIN ”; among other actions that we will carry out in the medium term (incidence, awareness, legal, healing, and restoration). The support will be channeled through COICA and will be made available to the affected indigenous peoples through the Base organizations.

The voice of Indigenous Peoples before a Genocide in the eyes of the World.

Your support is indispensable to save the Amazon.