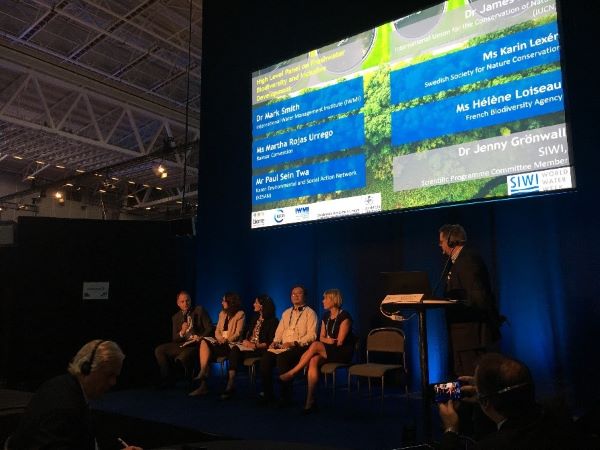 Water is central to all life on earth, and its governance is key in (re)shaping natural resource management across scales. This year’s Stockholm World Water Week focused on “Water and Society: Including All” placing inclusion and representation in the center of global policy agendas and discussion on water governance. The Swedish International Water institute (SIWI), which focuses on water innovation and collaboration, was the main organizer. Paul Sein Twa presenting “Salween Peace Park: A place for all living things to share” at the “Humanity and Nature Building a Key Strategic Alliance for the Future” Session. Photo: Diana Suhardiman, IWMI

Representing the Karen Environmental and Social Action Network (KESAN), and the ICCA Consortium, Paul Sein Twa attended this event and spoke at the ‘Linking Biodiversity with Inclusive Development Seminar’co-convened by Biome Environmental, International Union of the Conservation of Nature, International Water Management Institute, SIWI and Stockholm Resilience Centre which focused on placing rights-based approaches in environmental conservation high on global and national policy agendas. As a keynote speaker for the seminar Paul presented the Salween Peace Park in South East Myanmar as a clear example of why recognizing and supporting the contributions of ICCAs—territories of life through a rights-based approach to conservation is essential to the success of nature conservation and climate change initiatives. Founded upon the culture and traditions practiced by indigenous Karen for generations, the Salween Peace Park is a sustainable socioecological collaboration between over three hundred local communities to conserve one of the world’s globally important biodiversity hotspots. Residents of the Salween Peace Park fundamentally believe that their own health and prosperity directly corresponds to that of the environment in which they live. This has driven them to unite to protect their ancestral territories from potentially-destructive extractive projects, and to help both local communities and the natural environment to recover from decades of war. The efficacy of this approach is evident in the abundance of rare and important biodiversity in areas under indigenous Karen stewardship. The Salween Peace Park is evidence of indigenous communities’ ability to take to life examples of rights-based nature conservation, even while navigating the complex political terrains of the on-going ‘peace process’ in Myanmar.

Paul Sein Twa, Honorary Member of ICCA Consortium, also participated in a high-level panel on the Convention on Biological Diversity that focused on a post-2020 agenda, and on the importance of including freshwater biodiversity in future targets. Keynote speakers set the tone of the session, highlighting a pressing need to ‘take action’ on climate change. They called for a transformative approach to how we interact with and conserve the natural environment. There was acknowledgement of the failure of decades long attempts at conservation and a call for structural change to conservation and climate change mitigation initiatives. Core to this, they argued, is the development of strategic partnerships inclusive of all levels and sectors of society. The fishbowl discussion: How can we build on the linkages between inclusive development and biodiversity conservation? What are best practices for ensuring that diverse stakeholders consider and employ these linkages? Photo: Avital Li.

During the panel discussion Paul Sein Twa highlighted the need and opportunity to recognize and embrace the vital contributions of indigenous peoples and local communities to conservation, and to turn away from neoliberal models that seek only financial growth and the commodification of nature. Fundamental to this, he argued, is the refocusing of funding away from large-scale top-down protected areas and towards conservation initiatives led by indigenous peoples and local communities (IPLC) themselves. ICCAs—territories of life are a perfect example, as they are built upon long-established socioecological systems and bio-cultural practices, where landscape and culture are deeply intertwined. In fact, Paul argued, the strongest contribution that can be made by nations to the conservation of nature and mitigation of climate change is the development of robust frameworks that recognize and protect IPLC territorial and natural resource rights and customary systems through national and international law.

During the Stockholm Water Week a seminar on ‘Linking Biodiversity with Inclusive Development’ developed a strong consensus on the need to recognize the role of local communities and indigenous peoples in conservation of conservation of nature and mitigation of climate change and build alliances and networks towards rights-based natural resource governance.  For this, legal frameworks are needed and territories of life should be recognized as socially beneficial and valuable conservation approaches.

Featured image : © Diana Suhardiman, IWMI – High Level Panel on the Convention on Biological Diversity discussing the importance of improved communication and mobilization of political will to achieve a strong post-2020 global biodiversity.