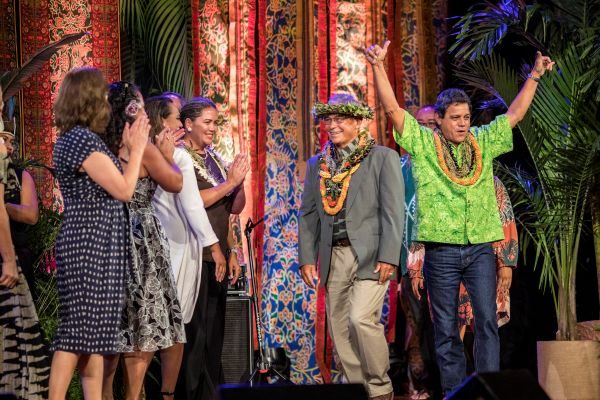 On the 24th of September, two community-based organizations founded and supported by ICCA Consortium Member Kuaʻāina Ulu ʻAuamo (KUA) were recognized for their work during the Equator Prize awards ceremony. The two Hawaiian community groups were awarded by the United Nations Development Programme and its partners, and shared the $10,000 prestigious Equator Prize.

This award was also a recognition of many communities across Hawaiʻi and the Pacific who work to mālama ʻāina (“care for that which feeds”) or steward their places. It further affirms the presence and role of indigenous people’s that were set forth at the Global E Alu Pū gathering preceding the World Conservation Congresses’ first sub-national forum and assembly in Hawaiʻi in 2016. A number of fellow ICCA Members from across the globe participated in that event as well.

This recognition on a global stage puts a spotlight on Hawaiʻi Governor David Ige’s stated goal to ensure  that “30% of nearshore marine areas will be effectively managed by 2030,” something that will not happen without the active support and participation of rural communities and Native Hawaiian fishers like those who are showing the way at Mo’omomi. The award comes during a year when the support and value of indigenous people and local communities in caring for their places and adapting to climate change is becoming a global imperative. The US itself recognized this under President Obama who in 2010 recognized the UN Declaration on the Rights of Indigenous People. Hannah Kīhalani Springer, a member of the E Alu Pū Network Council and board member of Kuaʻāina Ulu ʻAuamo (KUA), is optimistic about the value of building bridges to others doing life-saving work:

“I know everyone will return with renewed energy and purpose. With each day, the urgency of the work grows and our solidarity with indigenous communities around the world is critical to progress. It is very encouraging to those who have worked diligently for years on land and marine conservation to see their efforts lifted up with the Equator Prize. We are grateful to have the opportunity to learn from the others who were selected from hundreds across 127 countries,” she added. The winners were selected by a Technical Advisory Committee of renowned experts who chose the winning initiatives based on assessments of their impact as it related to two or more Sustainable Development Goals. They also examined the level and quality of innovations, the scalability and/or replicability of the initiatives and the ways in which inequalities in income could be reduced through resilience, adaptability, and self-sufficiency. The committee looked at how the nominees encouraged social inclusion and diversity, and advanced the empowerment of women and girls.

The Equator Prize and the international recognition comes as Hui Mālama o Moʻomomi awaits Governor Ige’s release of their community-based subsistence fishing area (CBSFA) proposal and rule package for public hearings and input. Though the law that authorized CBSFA’s was inspired by the work at Moʻomomi the first permanent CBSFA was implemented in Hāʻena, Kauaʻi in 2015. CBSFAs enable communities to co-manage natural resources with the government with the goal of reaffirming and protecting fishing practices traditionally exercised for purposes of native Hawaiian subsistence, culture, and religion. A number of other CBSFAs are being considered in places such as Kīpahulu (Maui), Miloliʻi and others.

Led by Kelson “Mac” Poepoe, Hui Mālama o Moʻomomi has worked for over three decades on matters affecting the nearshore fisheries of Moʻomomi, Molokaʻi to ensure that present and future generations of Hoʻolehua homesteaders and the families will be able to live off these resources. Their efforts are designed to maintain subsistence as a viable option in Molokaʻi’s fluctuating economy and to encourage young Hawaiians to learn traditional fishing practices and values.

In 2003, Mac Poepoe invited traditional nearshore gatherers to come together in an effort that led to the birth of the E Alu Pū network. This statewide rural Native Hawaiian stewardship network enables the sharing of knowledge in a way that is mutually empowering. In its methods and impact, it is quintessentially what the Equator Prize is all about, catalyzing broader statewide community-based natural resource management (CBNRM) initiatives. Uncle Kelson “Mac” Poepoe of Mo’omomi, Moloka’i island. Godfather and catalyst for community based fishery management in Hawai’i, he inspired the movement to facilitate and convene rural and native Hawaiian community based management networks, which directly led to the creation of KUA ©Mike Arrison.

Hui Makaʻāinana o Makana is a non-profit organization formed by descendants of the traditional families of Hāʻena, north Kauaʻi. One of the most heavily impacted tourist spots on the island averaging 2,300 visitors per day – over 800,000 a year – this initiative has most recently help lead to measures to moderate the impact of tourism.

Led by Presley Wann and Keliʻi Alapai, the Hui worked on an initiative to partner with the state to implement the first community-based subsistence fishing area (CBSFA) rules that allow for communities and the state to co-manage nearshore ocean areas together. The marine resources of Hāʻena feed local families, with the catch shared among community members.

The Hui looks to the history, identity, meaning, ecology, values and people of a place to find solutions to community-identified challenges. It worked with local divers, fishers, kayak and scuba businesses, surfers and other ocean users and businesses to develop solutions to user conflicts. Collaborations with scientists and researchers resulted in the documentation of the traditional knowledge of Hāʻena fishers and elders. A puʻuhonua (sanctuary) area was created, based on the traditional ecological knowledge, and sustainable fishing traditions of the community’s subsistence fishers. The Hui partnered with the county and State Parks to tend to the upkeep of family burials, sacred sites and historic loʻi.

Several major European governments, thought-leaders like Jane Goodall and Jeffery Sachs, and indigenous rights leaders like Vicky Tauli-Corpuz (United Nations Special Rapporteur on the Rights of Indigenous Peoples), as well as major conservation organizations, philanthropists and celebrities support the Equator Prize. Recognition of Hawaii’s contributions at the international gathering in New York this week underscores the momentum for a global movement of local successes that are collectively helping to advance the Sustainable Development Goals (SDGs).

More than ever, Governor Ige’s release of the CBSFA proposal for public hearings for Moʻomomi would send a message to the world that Hawaiʻi is serious about the collaboration between the state and local communities to be better stewards of the ‘āina. It is a message this delegation wanted to share with attendees at the events of the Climate week in New York.