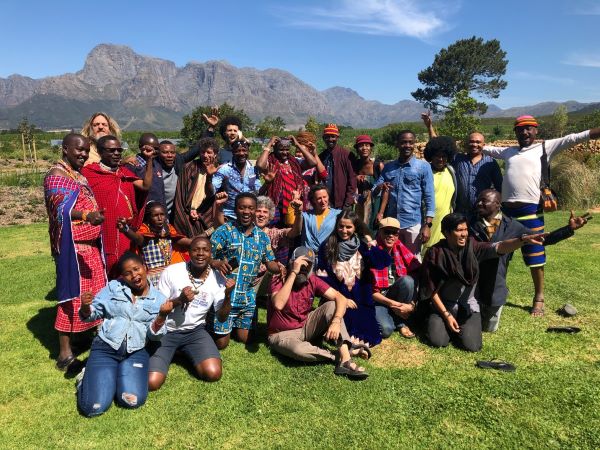 “Participatory video has been a mind-opening discovery, simple in method, yet very powerful. It definitely has a role to play in cultural revival and to help strengthen communities in restoring their identity. To bring back our peoples’ human dignity, this will ultimately also help enforce a stronger foundation for the process of healing.” Ivan Vaalbooi, member of the /’Aoni N//ng, San community of Southern Kalahari and Administrative Coordinator of Natural Justice, ICCA Consortium Member, in South Africa.

“The intersection between the law and video as a medium is powerful for legal empowerment and the power of peoples stories. This is a time in history for everything becoming integrated to effect greater environmental and social change.  Video can also contribute strongly to decentralizing the law.” Lesle Jansen, member of the African Commission’s Working Group on Indigenous Populations in Africa and Cape Town Hub Director of Natural Justice, ICCA Consortium Member, in South Africa.

The Video4Change grassroots gathering in South Africa in October 2019, hosted by InsightShare, was attended by 40 indigenous activists and video practitioners.

Video4Change is a platform where video activists and trainers, citizen journalists, organizations and individuals seeking to use video as a tool for change, can access resources and strategies to improve their work and initiatives.

Not everyone present had previous video experience, but all came to share and learn. Among the delegates were Lelse Jansen and Ivan Vaalbooi of Natural Justice, South Africa – ICCA Consortium Member. Lesle was invited to give input to our strategy sessions, sharing insights on Biocultural Community Protocols (BCPs) and Territories of Life. Ivan, a member of the /’Aoni N//ng, joined the other delegates representing 12 indigenous groups of Africa, from Gamo of Ethiopia to Pondoland of South Africa; from Baka of Cameroon to Maasai of Tanzania.

The gathering offered a space to discuss the most pressing issues of our time – the climate emergency, human rights abuses on indigenous lands and cultural extinction – and a space for solutions.

The power of culture and its centrality in defining a community’s relationship with the Earth reverberated throughout the four-day gathering. Samwel Nangiria, a Maasai activist from Tanzania, summarized this feeling: “All over the world I have seen people crying, culture is being eroded, culture is dying, traditional systems are dying, and therefore the bond between the land and the people is being destroyed … Other people are talking about land for money, land to make a living, but for us it is land for living.”

Many solutions were discussed, but none more so than participatory video. Participatory video enables communities to create participatory, community-driven media that reflects their unique concerns and amplifies their unique voices. Scolastica Kukutiya, a Maasai women’s rights activist from Kenya, said, “For me, a camera is not only a tool: with a camera I can see light ahead, through the camera unheard voices have been speaking out!” Scola’s words capture how participatory video is able to empower a community from within and strengthen community identity. They also speak of hope for the future. A shared future vision involves indigenous-led conservation methods, like those supported by the ICCA Consortium. Biodiversity and vital ecosystems are best preserved by those who know it most intimately: this bond with the land is what we mean by true land sovereignty.

The camera plays a role in this vision as a tool for amplifying indigenous voices, for holding decision-makers to account and for evidencing the benefit of indigenous-conservation methods. For example, videos can also be used to create educational videos on sacred natural sites and resources.

ICCAs and BCPs were unknown concepts to most of our partners and to some of them these concepts are still quite academic: “it feels beyond us” bemoaned a few delegates. Of course, the room full of Video4change practitioners proposed our collective solution: ICCA communities could be supported to use participatory video to document and share best practice! Imagine the potential for a rich exchange of strategies on ways to establish, secure and steward community conserved areas across the global community, peer-to-peer!

Lungelo Mtwa, Amadiba activist from Pondoland, South Africa, voiced a desire for this use of video among young people: “We can try to change the way the youth is now, by screening videos or creating stories or taking live evidence of things that are happening in our communities and communicating with youth from other communities or countries to see their way of living.” These same videos can also evidence the success of indigenous land and resource management: by documenting the natural flourishing of culturally preserved areas, we can prove that indigenous peoples are the best land custodians.

Video transmits voices, faces, human connections across the borders of time and space and nations. “Participatory video is helping us to connect with other regions. I have screened in Canada, west Africa, northern Africa. Now people know that this is an original process that can connect people not by visiting each other but by digital information, that builds courage to unite.”

Unity and global community were important aspects of the Video4Change gathering and were enshrined in the formulation of a Pan-African Living Cultures Alliance. This indigenous-led alliance advocates for the protection and celebration of the living cultures of indigenous peoples. “[Video can] showcase our culture – that it is alive and that it is the most sustainable in the world” (Jillo Katello, Gabbra Pastoralist, Kenya).

PALCA (Pan-African Living Cultures Alliance) is an alliance of Insightshare’s African partners – among them Baka, Gabbra, Maasai, El Molo, Gamo, Amadiba and San communities, who now wish to create Biocultural Community Videos -described by one delegate as Freedom Charters. They allow indigenous communities to express their identities, to demarcate their lands and their culture visions in their own words. This expression of freedom lays claim to human and land rights, so often denied to indigenous communities in our current political moment.

A final word from Ivan Vaalbooi: “For many years my people have always tried to find ways to erect and strengthen our indigenous structures, something that is not really well understood by most Western/ Modern societies. PALCA can help formulate and strengthen that vision and offer the necessary support, through community engagements, cross border learning and just generally be there as a collective community structure, by indigenous peoples, for indigenous peoples”.

It is time for the world to take notice of grassroots communities who are living in harmony with the Earth. I invite you all to consider how we might collaborate to support indigenous peoples in Africa at this crucial time: working through a Pan African Living Cultures Alliance, combining the ICCAs mechanism with participatory video and BCPs, to enable healing and security for communities and the land on which they live.