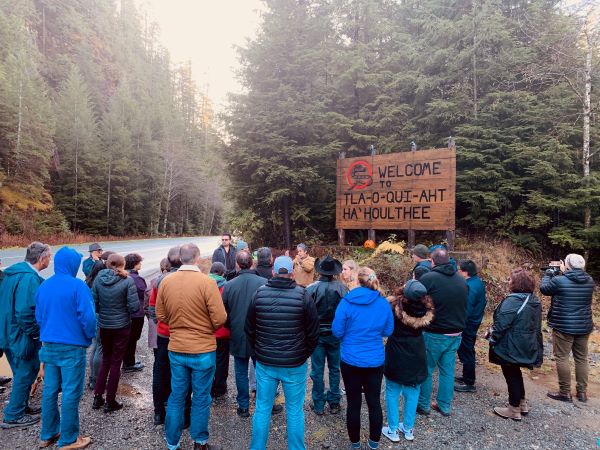 The purpose of November’s Productive Retreat was to bring together Indigenous Nations who are in the early phases of establishing IPCAs in their own territories. Complementing the guided tour of Tla-o-qui-aht Tribal Parks, the retreat included workshops and facilitated discussions. These sessions were framed in terms of four key elements that cannot be ignored in conversations about IPCAs: Jurisdiction, Financial Solutions, Capacity Development, and Cultural Keystone Species and Places. In some parts of the world, these might be the ‘four elephants in the room.’ However, since elephants are not native to Canada, these four elephants have become the ‘Four Moose,’ as documented by the Indigenous Circle of Experts in their 2018 report, We Rise Together.

Moose #1: Jurisdiction. IPCAs are an assertion of Indigenous Law, jurisdiction, and governance systems, which have long been ignored and undermined by Canada’s colonial governance structures. To this day, Indigenous Peoples are often harassed and mistreated by Canadian government authorities when they engage in traditional practices such as hunting or fishing. Indigenous Peoples in Canada also continue to face conflict over industrial resource extraction activities. Now, IPCAs are providing an opening for Indigenous Peoples to move beyond contentious rights-based arguments as they assert traditional responsibilities to care for the land and the water. By recovering these responsibilities, IPCA declarations are acts of self-determination.

Moose #2: Financial Solutions. The 2018 Canadian federal budget committed $1.3 billion for conservation, and in the first round of proposals 27 IPCAs received funding through this initiative. This is an important stimulus to move Indigenous-led conservation forward in Canada. However, IPCAs need to become financially self-sustaining in the long-term. Some IPCAs in Canada, such as Thaidene Nëné in the Northwest Territories, have established endowment funds to provide long-term financial sustainability. Many IPCAs provide benefits such as clean water, wildlife habitat, and eco-tourism business opportunities. In recognition of this fact, Tla-o-qui-aht Tribal Parks, which provides clean drinking water to the town of Tofino, has begun a pilot program to collect an Ecosystem Service Fee. In the program’s first year of operation, 27 businesses have signed on, pledging to contribute 1% of gross sales to Tribal Parks. Across Canada, the potential for such initiatives to finance establishment and stewardship of IPCAs is enormous. Moose #3: Capacity Development. Numerous initiatives are under way across Canada to build capacity for IPCAs among Indigenous Nations, conservation organizations, and government agencies. There are currently about 40 Indigenous Guardian programs across Canada; retreat participants raised the idea of developing IPCAs and associated Guardian programs to respond to the crisis facing salmon populations in the Pacific watersheds. The Conservation through Reconciliation Partnership is a 7-year research project funded by the Social Sciences and Humanities Research of Canada and housed at the University of Guelph. The project is co-directed by an Elders Senate and an Indigenous leadership team, and its purpose is to build capacity and mobilize knowledge for Indigenous-led conservation in Canada.

Moose #4: Cultural Keystone Species and Places. Since culture is the heart of an IPCA, protection of cultural keystone species and places must similarly be a core priority in the establishment and stewardship of IPCAs. Indigenous Peoples across Canada maintain relationships with special places and species that are important for cultural identity, livelihood, social life, and ceremonial purposes. The tour of Tla-o-qui-aht Tribal Parks allowed participants to experience first-hand places such as Ha’uukmin (Kennedy Lake), which means Feast Bowl in reference to the past abundance of Salmon and features in the origin stories of the Tla-o-qui-aht people. Retreat participants also witnessed the impacts of losing cultural keystone species such as monumental redcedar trees: since forestry companies have taken many of the best large cedar trees in Tla-o-qui-aht territory, master carver Joe Martin is forced to use lower-quality trees that never would have been used in the past. Restoring and protecting cultural keystone species and places must be a central focus of IPCAs, a fact that can sometimes be lost in the enthusiasm to meet national and international conservation targets.

The outcomes of November’s Productive Retreat, as participants wrestled with the Four Moose, will inform the ongoing development of something called the Solutions Bundle. The Solutions Bundle represents the convergence of the ‘toolkit’ (i.e., western conservation biology, written knowledge systems) and the ‘medicine bundle’ (i.e., Traditional Ecological Knowledge, protocols, ceremonies, and oral knowledge systems). Eventually, the Solutions Bundle may take the form of a multimedia website with different entry points to resources and information for actors involved in supporting Indigenous-led conservation in Canada. Project partners plan to launch a pilot website in time for the June 2020 World Conservation Congress in Marseille, France.

The Productive Retreat and discussions for the Solutions Bundle come at a critical time for Indigenous-led conservation in Canada. Progress on new IPCAs continues be made, such as the Ts’udé Nilįné Tuyeta protected area covering 10,000 square kilometres of boreal forest and wetlands in the Northwest Territories. On November 26, 2019, British Columbia became the first province in Canada to pass legislation to implement the United Nations Declaration on the Rights of Indigenous Peoples. However, the Four Moose continue to pose a challenge for Indigenous Peoples asserting their relationships and responsibilities to their Traditional Territories. Whether it’s conflict between Indigenous and Canadian jurisdictions in Wet’suwet’en territory, industrial ‘donut holes’ compromising the ecological integrity of places such as Nahanni National Park Reserve, or the continuing decline of cultural keystone species such as Salmon, Caribou, and redcedar trees, the Four Moose will continue to rear their heads. They cannot be ignored in any conversation about IPCAs in Canada.

The IPCA Establishment Productive Retreat was hosted by the IISAAK OLAM Foundation, Tla-o-qui-aht Tribal Parks (ICCA Consortium Member), and core members of the Indigenous Circle of Experts for the Pathway to Canada Target 1. Sponsors included the Social Science and Humanities Research Council of Canada through the Conservation through Reconciliation Partnership grant; the Assembly of First Nations (AFN) Advisory Committee on Climate Action and the Environment, and the IISAAK OLAM Foundation. For more information, please read the summary report.