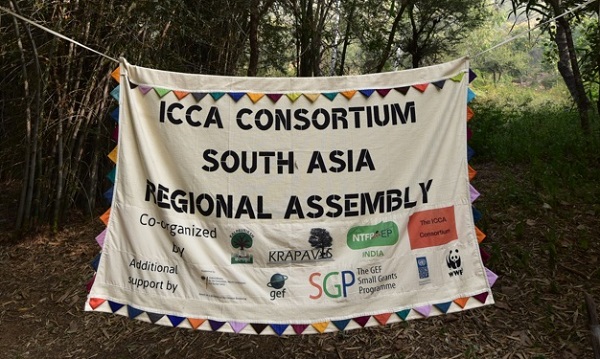 By Tanya Majmudar, representative of Kalpavriksh, Member of the ICCA Consortium.

The ICCA Consortium’s South Asia Regional Assembly was held in Prakriti Sadhana Kendra in Udaipur, Rajasthan in November 2019. Its objective was to bring together Members and Honorary members of the Consortium, its partners, and others working on community-conserved areas in South Asia, to share and learn from each other’s experiences, and to define a way forward for community conservation in South Asia. This was as a part of the process of regionalisation that the ICCA Consortium is undertaking, with the goal of strengthening ICCA networks and federations in different regions, and supporting more effectively the work of ICCAs on the ground.

A large number of participants from India were joined by individuals and organisations from Nepal and Bangladesh. Participants included representatives from various villages and local initiatives, civil society organisations, independent researchers, and academics.

Following a detailed introduction of the participants and their work, there was an introductory session on ICCAs in the global context, especially South Asia and India. A session on conservation and restoration in ICCAs identified gaps in traditional conservation systems and considered existing conservation practices, as well as the support required for conservation in different ecosystems. The focus was on community ownership in restoration efforts. A session on equity issues within ICCAs focussed on topics of gender, caste and youth perspectives. A breakout group discussion on livelihoods in ICCAs © Ashish Kothari

Through the lively interchange of a fishbowl conversation, group members shared ideas about systems of governance in ICCAs. The questions were: What is the governance structure in your ICCA? How did you move to self-rule? How have you made the government accountable? What efforts were taken to enhance governance capacities of the community members engaged, especially those of marginalised sections? How were wisdom and maturity aspects addressed?

Several participants shared their experiences. Within this rich discussion, a common consensus emerged: there can be no uniform or universal governance institution. Depending on the local context, governance mechanisms can be adaptive and extremely diverse, yet function within the universal principles of transparency, equity, justice, collective and open dialogues, and inclusiveness. 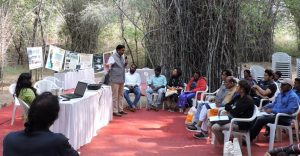 A session using the world cafe methodology saw breakout groups on systems of knowledge generation within ICCAs, systems of management and planning being adopted within ICCAs, and livelihoods security. The first group discussed ways of knowledge generation and transfer, including traditional and new systems. The second group discussed the need for a combination of formal and informal systems of management, relations with the state, and actions needed to achieve better management. The third group discussed several livelihoods and occupations related to ICCAs, their impacts on the communities and ecosystems, and the challenges faced by the ecosystems and people as they work to ensure livelihoods security. Other discussions centered on forms of institutions, governance mechanisms, successes, failures, and the roles of youth and women.

A variety of presentations highlighted international policy support to ICCAs and policy transformations in different countries, the potential of transformative laws such as the Biodiversity Act and the Forest Rights Act of India, and ICCAs within the larger context of alternatives and radical ecological democracy. The WCMC registry process and membership in the ICCA Consortium were also a topic of dialogue.

The concluding session turned to strategies and the way forward. Is a network of community-conserved areas in South Asia needed? And, if yes, what should its structure be? Several of the participants remarked that while involved with ICCAs in their respective areas and regions, they often felt isolated and alone in their work. A network could be a space for introspection, reflection, and cross-learning, and it could help local and national advocacy as well as provide a common collective identity to enhance community voices in various forums. At the South Asia level, a network could review and monitor the international instruments designed to support ICCAs, provide global visibility for ICCAs as an alternative narrative to fortress-based conservation, and lobby for the communities.

In the view of the group, South Asia’s regional network should be strengthened, and smaller thematic working groups should be formed. These would be at the level of landscapes and ecosystems that are geographically and culturally connected. Such groups could then come together at the national and regional levels — and also link with the international networks. This would make for a bottom-up approach, one that would ensure greater internal cohesion and understanding, in addition to greater participation. These smaller thematic groups should ensure at least 50% direct participation of ICCAs and greater representation of women and youth overall. A breakout group discussion on conservation and restoration © Ashish Kothari

Each thematic group listed their immediate action points, which included outreach, networking, documentation, knowledge generation, and advocacy, among others. The following were identified as focus areas of the South Asia network:

The exhibition and sale of various products enlivened the event. There were books on the environment, forest produce, indigenous seed varieties, pickles, sweets, bamboo products, and much more. As one participant, Bhavya George, said, “Not only did sessions have quite an impact on understanding different pathways and attributes of ICCAs, the serene venue of the regional assembly provided the added opportunity to interact with the participants and hear stories from around the region.” An exhibition stall by Vijay Jardhari showing the diversity of seeds from Tehri, Uttarakhand © Ashish Kothari