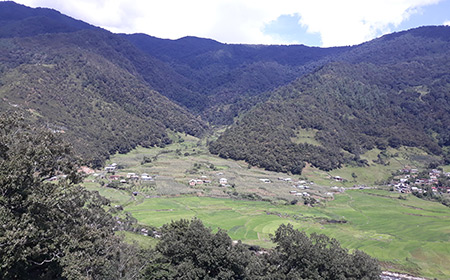 WWF-India is part of the South Asia network working for ICCAs.
By The Arunachal Times, directly extracted from this article on their website.

In a move to conserve a forest area in West Kameng district with a good repository of endangered wild animals, the villagers of Chug, under the guidance of the WWF-India, have declared nearly 100 square kilometers of their forest area a community conserved area (CCA), the WWF-India informed in a release.

The villagers have put a complete ban on hunting of wild animals and commercial extraction of timber and firewood from the forest. The forest covers a wide area, spreading from an elevation of 1700 meters to 5000 meters above sea level.

A study of the area’s biodiversity was conducted recently, using camera traps and sign surveys. Nearly 18 mammal, 21 bird and six butterfly species were found. They include rare and endangered species like the red panda, the takin, the musk deer, the Himalayan monal, the satyr tragopan, etc, the release said.

With the support of scientific research and data, a management plan will be prepared and put in practice by the villagers. The plan would guide the villagers on extraction and use of natural resources of the forest area in a sustainable manner, it said. “We are exploring livelihood activities for the villagers, which would be promoted as incentive for conservation of the forest and the wildlife,” said WWF-India Senior Project Officer Pema Wange.

Chug GB Tsering Khandu said important animals like the red panda, the takin, the musk deer, the Asiatic black bear, etc, must be conserved. “The forest, with its rich flora and fauna, will keep our Phu happy, so it brings good luck to us and we can stay healthy and happy,” said the GB.

Dirang ADC (in-charge), Dargey, said “conservation is the only mantra which can make the human race survive on the planet.” He commended the WWF-India’s effort to make the people of the area “realize their responsibilities and duties towards Mother Nature and harmonious coexistence that they have been practicing since generations.” “I strongly believe the organisation will take the effort to other areas as well in the subdivision by community involvement basis,” he said.