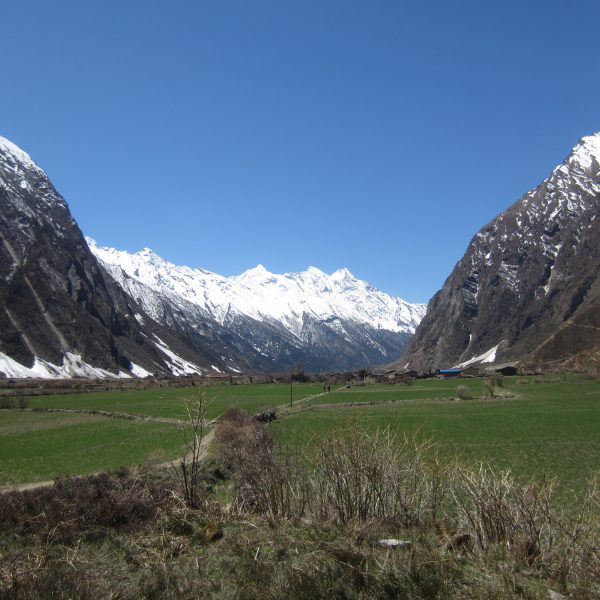 The Indigenous Tsumba people of the sacred Tsum Valley in the foothills of the northwest Nepalese Himalaya (altitude: 3,000 meters above sea level), will reaffirm their collective commitment to the conservation of nature and culture during a cultural Shyagya festival to be held April 17 -20, 2020.

This will be a centennial event, marking 100 years since the declaration of the Upper Tsum Valley as an area of non-violence by the Tsumba people and their Lamas (Buddhist religious leaders). It will be a historic moment, a renewal of the community’s commitment to non-violence and its resolve to continue following these seven key principles: The Tsum Valley is a Beyul (sacred refuge) created by Guru Ringpoche, who introduced Buddhism in Nepal in the 8th century. This Valley, a sacred place of spiritual significance, is sustained by Buddhist cultural values and practices, institutions of the Tsumba people, and the support of dedicated leaders and revered Lamas from the monasteries. This territory of life in the Tsum Valley predates official Protected Areas in Nepal, such as the Manasalu Conservation Area (IUCN Category VI), created in 1998. This broad Conservation Area, which includes the Tsum Valley, is co-managed by the National Trust for Nature Conservation and Conservation Area Management Committee.

The Upper Tsum (with 11 settlements) was declared a non-violent area in 1920, and the Lower Tsum Valley (with 22 settlements) declared its commitment to non-violence during the Shyagya festival in 2012. The declarations were made through community consensus. Nima Lama, a Tsumba community leader, stated in an interview: “We consider the valley as an open natural museum, where wildlife is intact and (allowed to) move freely.” He added, “We want to celebrate (the) Shyagya festival not for amusement, but to demonstrate our commitment to the conservation of biodiversity and culture for many generations to come. Our slogan for the event is Ahimsha ko abhiyan: Tsum basiko pahichan (a campaign of non-violence: the identity of Tsum inhabitants).”

A four-day festival is being planned and will include: a nature worship pooja (ritual) known as Rilung thrisole for the good of human beings, wildlife and other species, and the sun and the rain; Chewang pooja for good health; cultural activities (songs, dances, sports); the installation of sacred flags and poles; a march for world peace; and the Tsumba’s collective signature on the commitments and rules of non- violence. The Tsumba plan to seek government recognition and approval of the four direction boundaries (Char Killa) of the area of non-violence that they have marked and declared. This is considered important for sustaining the Tsumba’s territory of life, traditions, and practice of non-violence, as well as to obtain recognition of the sacred and spiritual significance of the place, its importance for biocultural conservation, and to complement the existing Manasalu Conservation Area. On Jan 3, 2020, the announcement of this centennial event was the subject of a press conference arranged by the festival’s organising committee in Kathmandu. It was featured in several prominent national daily newspapers and online media (see links below). A photo story of the Tsum ICCA was also made available to journalists and reporters.

The village in the Upper Tsum Valley that will be hosting the festival is only accessible by a 4-5 day trek on foot from the nearest road, or by chartered helicopter. The Tsumba people are inviting friends and colleagues from the ICCA Consortium all over the world to join them and witness this historic moment in the conservation of nature and culture. If you would like to support this collective, voluntary initiative by the Tsumba people, or if you wish to learn more about the event and the Tsum Valley, please contact: Jailab Rai (email: jailabrai@gmail.com); Sudeep Jana Thing (email: janasudeep@gmail.com); or Nima Lama (email: nimalamatsumvalley@gmail.com).

31.03.2020: Ed. note: This event has been postponed until further notice due to the COVID-19 pandemic. New dates for the celebration will be shared when ready.

If you wish to know more about the Shyagya festival and the Tsum Valley, you can read the chapter on page 8 of this book (in English) and media articles (all in Nepalese):