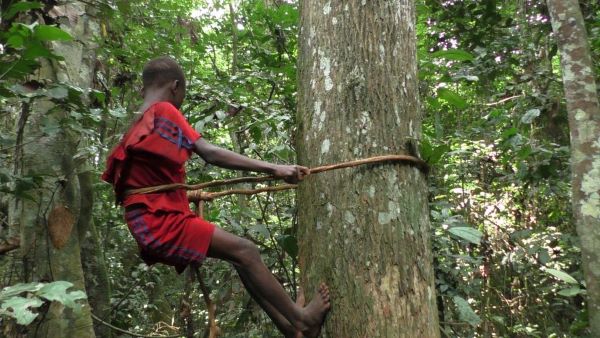 Over the ages, the forest-dwelling BaAka people and the Sangha-Sangha fisherfolk have developed an intimate and symbiotic relationship with the territory where they live. They have forged a vital connection to the forests and rivers on which their autonomous survival depends in the Sangha region, which straddles the border between Cameroon, the Republic of the Congo and the Central African Republic. The cultural values and social structure of these communities have been shaped by this connection to the land.

But now, the rich cultures of the BaAka and Sangha-Sangha face terrible challenges. Discrimination, exploitation and disregard for their traditions and way of life are all disrupting the transmission of ancestral practices by preventing knowledge from being passed down to future generations. The Ndima-Kali association is combating this trend by providing a space where young people from both communities can defend and promote their cultures and fight all forms of discrimination. Ndima-Kali was founded in 2012 with support from Ernesto Noriega and Tatjana Puschkarsky of OrigiNations, an NGO and Consortium Member. In 2016, Ndima-Kali held its first general assembly and became legally established as a not-for-profit organisation. Ndima means “forest” in the BaAka language, and kali means “river” in Sangha-Sangha: the places of central importance to each group’s traditional practices.

Since its founding, Ndima-Kali has worked with over 1,500 young indigenous people from 11 villages in the Yobé-Sangha municipal area, but also across the border in Bomassa in the northern Republic of the Congo and Mambele in eastern Cameroon. The association works to promote and valorise traditional knowledge and defend the two communities’ rights to territory, natural resources and education.

Ndima-Kali’s mission is threefold: preventing the decline of our unique cultures, documenting and promoting traditional knowledge as an important tool for self-determination, and fighting injustice and discrimination.

Its concrete objectives are the following:

The youth members of Ndima-Kali are involved in all of the association’s activities.

We at Ndima-Kali regularly organise sleep-away camps during which we take 20 to 30 young people to spend a week at the Pibongo encampment about an hour’s boat ride away. Each group is joined by two elders with traditional knowledge in a particular area. We also regularly conduct campaigns in villages and schools to raise awareness of the important role that traditional culture can play in conservation, and we have published a booklet on identifying local medicinal plants. Ndima-Kali also conducts community mapping. Wood is harvested through forest concessions in areas on which a large proportion of the indigenous population – particularly the BaAaka people – depend for survival and exercise of their traditional practices.

In the Central African Republic, customary rights to access and use natural resources are guaranteed under the Forest Act (Code de la Forêt) of 2008, the FLEGT Voluntary Partnership Agreement of 2010 and ILO Convention No. 169, which the country ratified in 2010. Participatory mapping of communities is among the FSC requirements and therefore also qualifies to meet less strict certification requirements.

We began our community mapping project in 2016, which has allowed inhabitants of the villages of Kanza, Nguengueli, Gbokosso and Camp-Dimanche to create precise maps of their most important resources using smartphones equipped with GPS. The resulting maps are used by the concession-holder (SINFOCAM) when prospecting and harvesting timber. The maps also serve to ease communication, thereby helping to avoid conflict and ensure that the precious resources needed by locals are respected and protected during harvesting.

In collaboration with Maison de l’enfant et de la femme Pygmée (“Pygmy women and children’s house”, another NGO), we organise information campaigns on how to fight abuse and discrimination. We also introduce locals to institutions that can provide them with support and aid. We have also created a comic strip (“No discrimination in schools”) to teach Bantu children about accepting indigenous children in the classroom. Another of our booklets, written in the local language, encourages indigenous children to study in their native language as well as French.