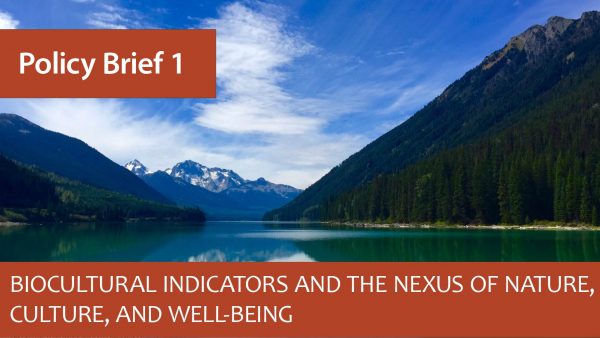 Throughout the month of August, the Centre for Indigenous Conservation and Development Alternatives (CICADA) launched the first four policy briefs of its series on biocultural diversity in settler state contexts. The policy briefs identify challenges, explore opportunities, and provide recommendations on the following topics:

1.       Measuring Biocultural Diversity: Biocultural Indicators and the Nexus of Nature, Culture, and Well-being

The policy briefs are the outputs of two conferences held in May 2019 in Montreal, Canada, and organised in partnership with the ICCA Consortium. The first conference, from 1 to 4 May, was a joint CICADA and ICCA Consortium meeting for members from Canada, the United States of America, Australia, and Aotearoa New Zealand (‘settler state’ contexts). This meeting followed a first joint regional conference focusing on Latin America in October 2018 in Fusagasugá, Colombia, and a second regional conference focusing on Africa in November 2018 in Bishoftu, Ethiopia.

The second conference was the first North American Dialogue on Biocultural Diversity, held from 5 to 8 May. The dialogue was co-sponsored with the Secretariat of the Convention on Biological Diversity, the Canadian Commission for UNESCO, the Center for Biodiversity and Conservation at the American Museum of Natural History, the Assembly of First Nations, the Quebec Centre for Biodiversity Science, Parks Canada, and the Ministère des Relations Internationales et de la Francophonie du Québec (Ministry of International Relations and Francophonie of Quebec).

The two conferences brought together representatives from Indigenous communities, academia, international and non-governmental organisations, and governments to explore the linkages between biological and cultural diversity at regional level, their implications for natural resource management and decision making, and the main challenges and opportunities in preserving biocultural diversity. Participants of the North American Dialogue adopted the Atateken Declaration, available here, which recommends actions to foster resilient communities and strengthen the links between biological and cultural diversity in North America.

The policy briefs draw on the presentations and discussions held during these meetings and the Atateken Declaration recommendations. They build a case for recognizing Indigenous rights to self-determination, supporting Indigenous management and governance of natural resources, and fostering the revitalisation of Indigenous languages and cultures. In other words, this series of policy briefs argues that supporting territories of life is the way forward to promote healthy ecosystems and communities and to ensure a fair and sustainable future for all.